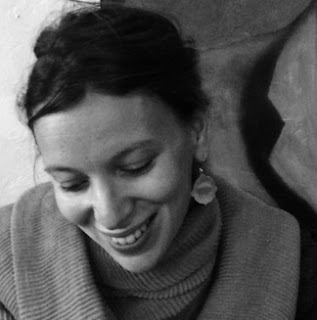 Yanara Friedland is a German-American writer, translator and teacher. Her first book Uncountry: A Mythology was the 2015 winner of the Noemi Fiction Prize. Abraq ad Habra: I will create as I speak, a digital chapbook, is available from Essay Press. She is the recipient of a DAAD and an Arizona Commission of the Arts research grant in support of a collection of essays written collaboratively in the German-Polish and US-Mexican borderlands.

1 - How did your first book change your life? How does your most recent work compare to your previous? How does it feel different?
I am not sure when I started writing Uncountry. I sometimes think I've been writing it my whole life. There were so many narratives and characters that I wanted to tend to and investigate that have been with me for a long time. Writing the book felt like understanding the many geographies that impacted my own becoming. From literary lineages to blood ancestors, historical events and mythic lore, I was able to bring various threads into one place and let them be in conversation with each other.

2 - How did you come to fiction first, as opposed to, say, poetry or non-fiction?
I really don't think in those terms. I have always written across and within forms, and each work requires a different gesture. I remain open to what that can look like. In terms of beginnings, I think I started with dreams, with the fragment that obstinately courses the system and can never be fully captured.

3 - How long does it take to start any particular writing project? Does your writing initially come quickly, or is it a slow process? Do first drafts appear looking close to their final shape, or does your work come out of copious notes?
It depends on the project. Uncountry took many years and many drafts. I have several folders of drafts, several books that are called Uncountry. It took me  a long time to really find cohesion and attunement between the various narratives that the book is holding. It was initially very unwieldy and for a long time rather unreadable. My second book, mostly poems, came out of three long walks across European border regions. I wrote this fairly quickly, though that evaluation may be relative. I do keep notebooks, usually recording moments, observations, dreams and ideas. They are often illegible, but keep me on track. There is often a logic in the illegible note taking practices that I cherish that I often only understand after some time.

4 - Where does a work of fiction usually begin for you? Are you an author of short pieces that end up combining into a larger project, or are you working on a "book" from the very beginning?
Again, it depends. Uncountry began from many divergent and often short prose pieces. Sometimes I would write between these shorter pieces and they became a longer story, but I prefer in many ways juxtaposition to one large cohesive sweep.

6 - Do you have any theoretical concerns behind your writing? What kinds of questions are you trying to answer with your work? What do you even think the current questions are?
How can I approach you with care?

What is hiding behind our disastrous present?

What are the invisible worlds communicating?

What is the root of this country's sorrow?

How will we live here now?

7 – What do you see the current role of the writer being in larger culture? Does s/he even have one? What do you think the role of the writer should be?
I think the moment we stop believing that the writer, or for that matter any artist, maker has a role in culture we are in dangerous territory. Writers often sit between spaces, at the margins, inquire and gather what is not always seen. I believe in the writer as seer and augur, as someone who can constellate the complexities of the worlds and offer throughways or at least space of recognition. A writer is someone who listens, who is connected to the messages of place, mystery, suffering. A culture without poets, writers artists is a culture that wants to forget itself and has forgotten others.

8 - Do you find the process of working with an outside editor difficult or essential (or both)?
I usually feel very honored by the hard work an editor does, tending someone else's lines and concerns. I think this relationship is essential, not necessarily to make the work better, but to begin to usher it out of my own room towards the world. That being said, here are a lot of average editors out there. I think it takes a very particular skill set and giftedness to be a good editor.

9 - What is the best piece of advice you've heard (not necessarily given to you directly)?
The antidote to fear is a baby step.—Mark Baumer

10 - How easy has it been for you to move between genres (fiction to non-fiction)? What do you see as the appeal?


11 - What kind of writing routine do you tend to keep, or do you even have one? How does a typical day (for you) begin?
It begins with the lighting of a candle, with a notebook, half open eyes. I usually don't write whole days at my desk, but a lot of writing also happens when I am not writing; that is when I teach, take a train, stare at people, when I sleep.

12 - When your writing gets stalled, where do you turn or return for (for lack of a better word) inspiration?
Dreams, poetry, Clarice Lispector

13 - What fragrance reminds you of home?
baked apple cake, snow, a struck match

14 - David W. McFadden once said that books come from books, but are there any other forms that influence your work, whether nature, music, science or visual art?
I am always impacted by where I live, the landscapes that surround me, right now the desert. I write frequently in the great companionship of music (Lauri Anderson and Meredith Monk, Keith Jarret, Leonard Cohen among others) and in collaboration with art. For Uncountry I worked with an amazing visual artist, Mollie Hosmer Dillard, who created the images inside the book, for each History, and also painted the book cover. Walking is important to me, or perhaps, movement in general. I write well in trains, in transit, crossing the Atlantic.

15 - What other writers or writings are important for your work, or simply your life outside of your work?
There are some core writers that carry me through most years: Unica Zürn's work, Christa Wolf, Clarice Lispector, Ana Mendieta, oral histories and life writing. More recently Svetlana Alexievich, Else Lasker Schüler, Daniel Borzutzky. Right now, I am reading a lot of books on Berlin pre- WWI and the Sturm movement.


17 - If you could pick any other occupation to attempt, what would it be? Or, alternately, what do you think you would have ended up doing had you not been a writer?
astrologer, rabbi, social worker

18 - What made you write, as opposed to doing something else?
It stayed and persisted, grew and traveled, but I do other things too. I find myself moving between a lot of different kind of action in the world. I teach, I research, I work in communities. I am not completely identified with "the writer" and yet it has been the one thing signaling continuity.

One more time with Feeling—Nick Cave

20 - What are you currently working on?
A book of essays (or maps) titled Groundswell, built from first hand accounts, interviews and archival material speaking from the German-Polish border and the Sonoran borderlands.