12 or 20 questions with Jared Stanley 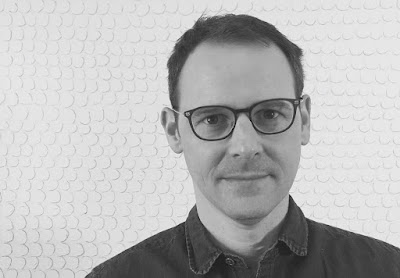 Jared Stanley is a poet, writer and visual artist. His most recent book is EARS (Nightboat Books, 2017).

1 - How did your first book change your life? How does your most recent work compare to your previous? How does it feel different?
Hm. This new one, EARS, loves the world more as the world “order” comes apart.

2 - How did you come to poetry first, as opposed to, say, fiction or non-fiction?
Prince wrote fantastic, suggestive lyrics, and the shiny compactness of his lines pulled me first in the direction of writing lyrics for songs, and then on to writing poetry. So many lines come to mind… “She had a pocketful of horses / Trojan and some of them used” or “Seems that I was always doin' something close to nothin.". A bit later, one of my high school teachers had us read Prufrock – the patient etherized on the table. Once I knew what ‘etherized’ meant, it really all came together. I liked poetry’s aggressive posture towards what the bumperstickers of my youth called “consensus reality.”

3 - How long does it take to start any particular writing project? Does your writing initially come quickly, or is it a slow process? Do first drafts appear looking close to their final shape, or does your work come out of copious notes?
It’s important to me to make books in a different way each time. As a general rule, I’m against method, but if an individual poem’s imperatives require a method, then I’ll stick to that. That makes it sound like I know what I’m doing – but I really don’t know how they come.  It’s really like fishing or prayer.

4 - Where does a poem or work of prose usually begin for you? Are you an author of short pieces that end up combining into a larger project, or are you working on a "book" from the very beginning?
My poems seem mostly to be occasional, now – something happens and I write. Joanne Kyger died, so I’m writing about her. The crisis of white masculinity (ie the Trump “whitelash”) has come around again, bringing the essential violence at the heart of the US up right in our faces, so that seems to be hovering around in my writing. My daughter’s life and future, for the same reasons.

As for the second question, I am not any kind of author, that I can see at least. I’m sure other people see me as some kind of author.

5 - Are public readings part of or counter to your creative process? Are you the sort of writer who enjoys doing readings?
Reading aloud is absolutely central to my work – I compose by ear, and I want a poem to work whether it’s read silently or recited. I don’t understand writing which isn’t made for the ear. My book is called EARS for a reason. Also, I like to write poems for specific readings. Many of the poems in EARS were written for an occasion – I wrote “Legs” for a reading in San Francisco, so it’s full of references that people who were in San Francisco in the 80s would understand. I take the sonic structures of a poem very seriously. Along those lines, performance is also quite important. I love being in my poem with my body – the romance of coming to love yourself through your poem – and a poetry reading can be a demonstration of such love.

6 - Do you have any theoretical concerns behind your writing? What kinds of questions are you trying to answer with your work? What do you even think the current questions are?
My poems are pretty confused by the persistence of joy and love. The poems are sober about the ways capitalism and the fears it manufactures destroy the planet and its people, and the ways that we will probably not do anything serious to avert that ‘ongoing crisis.’ That position causes me a lot of pain, which is not theoretical – it results in a specific practice of parenting, for instance. Poetry isn’t really ideas, to me, and when I invoke ‘poetry’ in the abstract, it means ‘life.’

8 - Do you find the process of working with an outside editor difficult or essential (or both)?
It depends on the editor and the project! In poetry, editorial is great. In prose, I really love being pushed by an editor to go further. I mean, I hate it in the moment, but I appreciate it.

10 - How easy has it been for you to move between genres (poetry to prose)? What do you see as the appeal?
Quite hard actually. I am a poet who writes prose and makes art. Moving from art to poetry is easy, moving from poetry to prose is very hard. I remember a story of guitar player whose right hand was destroyed in an accident, and the guitarist had to re-learn to play left-handed.

11 - What kind of writing routine do you tend to keep, or do you even have one? How does a typical day (for you) begin?
Once I have a project going, that project tends to dictate its routine. For instance, lately I’ve been mostly writing prose, and I have a word count of 500 words a day, just to get in and stay in the writing. Poetry doesn’t work like that for me, and art definitely not. And I have a small child, so ‘routine’ is mostly dictated by her schedule, whims, and bowels.

12 - When your writing gets stalled, where do you turn or return for (for lack of a better word) inspiration?
Either tarot cards or a walk. Sometimes I ask my kid (she’s three) for advice.

13 - What fragrance reminds you of home?
Redwood duff. Which also reminds me that there will be no redwoods in the Bay Area in a century.

14 - David W. McFadden once said that books come from books, but are there any other forms that influence your work, whether nature, music, science or visual art?
Oh yeah, all of the above. I probably learn more about poetic form from music and visual art. I look to books to learn prose. For me, there’s a bright line between prose and poetry, and almost no line between poetry, music, and visual art.

15 - What other writers or writings are important for your work, or simply your life outside of your work?
This is a long long list, at the top of which is probably Joanne Kyger, whose loss I am still processing.

16 - What would you like to do that you haven't yet done?
Finish a novel.

17 - If you could pick any other occupation to attempt, what would it be? Or, alternately, what do you think you would have ended up doing had you not been a writer?
Cordwainer – I love shoes, and I would still love to design and make shoes.

But honestly, if I hadn’t become a writer, I would have become a biologist, I’m pretty sure – though I don’t know if I could’ve done it without anti-depressants.

18 - What made you write, as opposed to doing something else?
I write mostly for the pleasure of rubbing two words together, and then three, and four. I’ve come to love sentences, which is a great lesson of prose. I love riding the bus just to hear people talk. Conversation is so musical.

Last great film – Get Out. I’m jealous of Peele – you can feel, in that film, how the unity comes out of the premise, how the movie must’ve have written itself as he got going. The character of Logan, the scene in which Chris ‘rescues’ the “grandmother”…so much. I don’t know about you, but Get Out was all anybody in my world could talk about for weeks.

20 - What are you currently working on?
I’m typing up a few essays and a longer prose thing that I don’t want to jinx by talking about. Apparently a very long elegiac poem about baby boomers is starting to froth up. Also, thinking of writing a poem called “Preschool of the Arts” about how late capitalist parenting (for middle class stressballs) is a real “war of all against all” situation. How tragicomic. Maybe that’s a negative parenting manual?

Posted by rob mclennan at 8:31 AM
Labels: 12 or 20 questions, Jared Stanley, Nightboat Books