Cole Swensen, On Walking On

Cooler this evening, particularly crossing the bridges, where the wind picks up and is making a mess of the surface of the water. People walking, many tonight, and almost in rhythm, as if it were a way of collectively resisting the wind. I stop and look over the parapet, down onto the quay, where five pigeons seem to be marching in step in a single, evenly paced line. I know this is only the projection of a human attachment to order onto random avian behavior, but still, it’s a remarkably straight line and remarkably evenly paced. 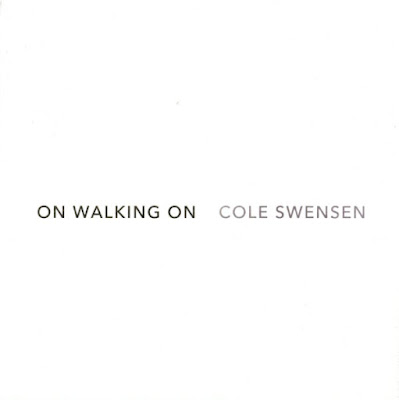 American poet Cole Swensen’s latest is On Walking On (New York NY: Nightboat Books, 2017), a book-length suite of poems engaged in the subject of walking, from her own notes on the subject to her responses to a lengthy list of other works by Geoffrey Chaucer, Jean-Jacques Rousseau, Dorothy Wordsworth, Henry David Thoreau, George Sand, Virginia Woolf, Thomas De Quincey, Charles Dickens, Robert Louis Stevenson, Gérard de Nerval, Guillaime Apollinaire, John Muir, Robert Walser, W.G. Sebald, Werner Herzog, Harryette Mullen and Lisa Robertson. The back of the collection includes a healthy bibliography, which Swensen introduces by writing: “This series hopes to honor the millennia-old connection between walking and writing without trying to be in any way definitive. It started with an interest in texts written by a number of writers about walks that they had taken and then branched out in various idiosyncratic ways. Idiosyncrasy, in the long run, became the only principle of both selection and order.”

The book moves from sections of shorter poems (up to six, but as few as two) alternating with sections of longer sequences focusing on specific works, from “ROUSSEAU: THE REVERIES OF A SOLITARY WALKER,” and “SAND: PROMENADTES AUTOUR D’UN VILLAGE,” to “SEBALD: THE RINGS OF SATURN” and “ROBERTSON: ‘SEVEN WALKS’,” a sequence echoing Lisa Robertson’s “Seven Walks” from her Occasional Work and Seven Walks from the Office for Soft Architecture (2003), that includes:

And thanking memory, we spent every afternoon in a park, hiding
a different century    my guide with the endless peaches, and then

suddenly a fig. Suddenly threw our class affiliations into striking
relief, and disappearing to everyone but ourselves, we let time slide

through us. Yet cannot deny: we felt hands too dragging through
our own, leaving empty. We were not alone. (“The Second Walk”)

As I’ve referenced in reviews of some of her previous books, what I’ve long appreciated about Swensen’s poetry books is the way in which she seems to approach each book-length work as a study on or around a particular subject, having written previously of landscape paintings (see my review of her LANDSCAPES ON A TRAIN), gardens (Ours: poems on the gardens of Andre Le Notre), hands (The Book of a Hundred Hands) and graveyards (see my review of her Gravesend), among nearly a dozen other lyric stretches across a realm of research (a great deal of which centres around medieval history or subjects). In certain ways, her multiple poetry collections over the years have evolved from collections of linked lyrics to book-length essay-poems, even to the point of each title existing as a single, continuous poetic line. On Walking On, also, moves temporally, threading another line through the collection that runs from the medieval walks of Chaucer, through to a far more contemporary walk via Lisa Robertson, allowing each step in the poem to move the collection forward through history and time. Responding to questions from Maria Anderson via The Rumpus in 2016, on an earlier selection of the manuscript (posted as a chapbook by Essay Press) [I also wrote on an earlier, albeit different, section of the same manuscript, here], Swensen wrote:

Cole Swensen: No, I’ve never thought about it specifically, but in fact I neither take anything along nor take anything away. My focus is on the rhythmic relationship between body and ground and the visual relationships among the elements of the always-changing scene.

But yes, sometimes I do have rules, or rather constraints. One I’ve been working with lately, for instance—and it only works in urban spaces—is the single constraint of turning left whenever I encounter an obstacle, something that makes me stop, such as a traffic light or a T intersection or crowd congestion. I’ve been doing a series of these walks this fall, always starting from the same place and always for the same length of time, to see how differently the walk develops. I end up in very different places.

Rumpus: This is a fascinating constraint. Have you ever looked at these walks visually? Drawn them up on a map to see the shapes?

Swensen: Yes! Exactly! I’m so glad that comes to mind! I do draw them out on a map, and in that way, the kinetic experience becomes a visual work, and the perspective that has been linear and time-based suddenly becomes bird’s-eye-view spatialized. I have also then retraced the lines on a separate sheet of paper, thus removing the map and turning the lines into an abstract drawing.