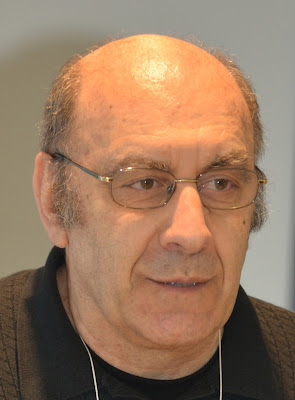 Michael Mirolla [photo credit: Salvatore Mirolla] describes his writing as a mix of magic realism, surrealism, speculative fiction and meta-fiction. Publications include the novel Berlin (2010 Bressani Prize winner); The Facility, featuring a string of cloned Mussolinis; and The Giulio Metaphysics III, where “Giulio” battles for freedom from his own creator. Other publications: the short story collection The Formal Logic of Emotion; a punk novella, The Ballad of Martin B.; and two collections of poetry: Light and Time, and The House on 14th Avenue (2014 Bressani Prize). His short story collection, Lessons in Relationship Dyads (Red Hen Press, California), took the 2016 Bressani Prize. The novel Torp: The Landlord, The Husband, The Wife and The Lover, set in 1970 Vancouver, was published in 2016, and 2017 saw the publication of the magic realist short story collection The Photographer in Search of Death (Exile Editions). The short story, “A Theory of Discontinuous Existence,” was selected for The Journey Prize Anthology; and “The Sand Flea” was a Pushcart Prize nominee. Born in Italy, raised in Montreal, Michael now lives in Oakville, Ontario. For more: http://www.michaelmirolla.com/index.html.

[Michael Mirolla will be launching his short story collection The Photographer in Search of Death at Octopus Books in Ottawa on Wednesday, February 28]

1 - How did your first book change your life? How does your most recent work compare to your previous? How does it feel different?
As I had been writing since Grade School and had many short stories and poems published before my first book (The Formal Logic of Emotion), its publication didn't change my life all that much – except perhaps to give me confidence about future publishing. My most recent published work is in some ways a throwback to some of my earliest: more speculative fiction/magic realism style material versus a more realist/naturalist approach in works such as Torp and Lessons in Relationship Dyads. In some ways, I feel as if I've gone full circle or perhaps an upward spiral is better – as if I could reach down and touch themes and concepts from my past which would be a long way off if I actually had to go back to them.

2 - How did you come to poetry first, as opposed to, say, fiction or non-fiction?
Well, while my first piece of published writing was a poem ("The Strange Land"), published in Canadian Forum when I was 19, I wrote a lot more fiction than poetry in the early days. And I also concentrated on writing plays. It was a play, for example, that got me into the MFA creative writing program at UBC way back in 1969. And one of the first awards I received was from the Ottawa Little Theatre Playwriting Competition.

3 - How long does it take to start any particular writing project? Does your writing initially come quickly, or is it a slow process? Do first drafts appear looking close to their final shape, or does your work come out of copious notes?
My projects start quickly. A few notes and I'm off. The writing itself also comes quickly. In spurts. When it comes to drafts, however, it all depends on the particular project. Poems comes out pretty much in finalized form. Most short stories also emerge almost fully formed. Novels are a different animal and may go through numerous iterations before something comes out that I feel works. Again, when it comes to notes, novels can create many files of research, much of its tangential and perhaps never destined to see the light of day.

4 - Where does a poem or work of prose usually begin for you? Are you an author of short pieces that end up combining into a larger project, or are you working on a "book" from the very beginning?
I think this definitely depends on the particular project. For an individual poem, it comes out of an image ... a feeling ... a colour ... Short stories arise from all kinds of sources – newspaper articles, a philosophy text, the internet ... A novel starts with a major concept/conflict/big idea. I've converted some short stories into a novella but, when it comes to novels, that's how they start. Although I have taken pieces of a novel and turned them into short stories.

5 - Are public readings part of or counter to your creative process? Are you the sort of writer who enjoys doing readings?
When I was young and an "artiste," it was the garret for me. The world would come a-knockin'. Now, I love readings. I love the interaction with the audience. They have very much become part of my creative process.

6 - Do you have any theoretical concerns behind your writing? What kinds of questions are you trying to answer with your work? What do you even think the current questions are?
If I had to come up with one major theoretical concern behind my writing, it would be the intersection between self-identity-society. Questions: What does it mean to be human? What makes us essentially human? How does the individual consciousness interact with that of others? At what point can we state that a human being has been stripped of all the non-essentials that accrue over a lifetime? In my opinion, the questions being asked in much of today's literature miss the point: rather than asking what it means to be human, they tend to ask what it means to be this or that -- gender, race, etc. Rather than looking inward to see what's right and what's wrong, they tend to be directed outwards, looking to place blame elsewhere.

7 – What do you see the current role of the writer being in larger culture? Does s/he even have one? What do you think the role of the writer should be?
I see the role of the writer to be similar to that of Socrates: to question the consumer propaganda, to sort the truth from indoctrination, to fight for what is truly individual and unique versus the sheep/herd mentality, to serve as a voice that combines head and heart in order to get down to what is really important and valuable for our short stay on the planet. Unfortunately, too many of our writers today are too busy in-fighting and dreaming of superstardom to appreciate these tasks let alone take them on in their writing.

9 - What is the best piece of advice you've heard (not necessarily given to you directly)?
“Try again. Fail again. Fail better.” – Samuel Beckett

10 - How easy has it been for you to move between genres (poetry to plays to short stories to novels)? What do you see as the appeal?
It has been relatively easy to move from one genre to another. Often I'm working in three or four different ones at the same time. I also find it easy to move from non-literary work to the literary output. A switch somewhere? Maybe. The appeal? Well, for me, each genre has its own way of "saying" something. The aim is the same; the approach is different. One thing is constant: language.

11 - What kind of writing routine do you tend to keep, or do you even have one? How does a typical day (for you) begin?
Not much of a routine these days. Typical day begins with email. Some days, I jot down what has been brewing overnight; other days I pull up something I've been working on; still others, I do secretarial work.

12 - When your writing gets stalled, where do you turn or return for (for lack of a better word) inspiration?
It's an internal process these days. I used to turn to the classics – poetry, novels, philosophical writing. But now I turn inwards.

13 - What fragrance reminds you of home?
Grated orange peels.

14 - David W. McFadden once said that books come from books, but are there any other forms that influence your work, whether nature, music, science or visual art?
Yes, all of the above (as strained through books).

15 - What other writers or writings are important for your work, or simply your life outside of your work?
James Joyce, Franz Kafka, Virginia Woolf, Samuel Beckett, T.S. Eliot.

16 - What would you like to do that you haven't yet done?
Take a trip to Mars

17 - If you could pick any other occupation to attempt, what would it be? Or, alternately, what do you think you would have ended up doing had you not been a writer?
Before I switched to English Lit and Philosophy at university, I was taking advanced math, chemistry and physics. I probably would have ended up as a chemist.

18 - What made you write, as opposed to doing something else?
I have been writing since Grade School. Without writing, I wouldn't exist. From the start, it was my way of making sense of myself.