Some Paintings of Ghosts

There are so few paintings of ghosts, which is really rather odd
since there at last they could be seen, could slightly live
in the visible, under glass

in the shock of recognition on the face of the dying

that, in a Rembrandt sketch, or I saw it once
in a painting by Ingres, though he had not
put it there. 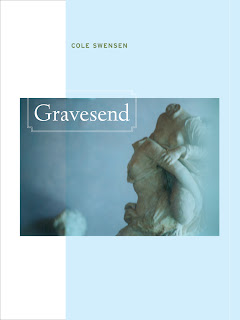 According to the back cover copy of Gravesend (University of California Press, 2012), American poet Cole Swensen’s [see her 12 or 20 questions here] thirteenth trade poetry collection, the book “takes its name from the English town at the mouth of the Thames, revisits the genre of the ghost story and, through fragmentation, juxtaposition, and allusion, powerfully summons the uncanny, the spectral presence.”

Swensen has long worked her poetry collections as thematic projects, from hands to gardens to a book of the hours to the movement of opera, each book as much of an essay of sorts as a movement, a progression through a sustained query. Gravesend writes out the shapes and considerations of ghost stories, using the real Gravesend as a focal point from which she ripples out, composing and incorporating stories of Pocahontas, Henry James, folk and fairy tales, rumours and other fragments, wrapped up into a poem-collage. What are facts but stories that have been repeated often enough to turn to stone?

Gravesend is named after Mr. Silvaneous Grave
who in 1123 opened a store here
at the end of the road
leading from London to the sea.

No, London does not go to the sea.

So Gravesend is named after Mr. Albert Graves
who established a hotel at the first point
that boats turned in from the channel to go up the Thames.

And Gravesend is named for a preacher,
Euphonius Grave by name, who fell off a cliff
one night at just this spot. There are those who say
the waves carried him off, ablaze.

Once we dreamt that a grave had an end,
that a life didn’t just keep on growing and growing
until the grave stretched from here
to its clearance.

No, a grave is a grievance.

South Africa and India. It was a door
through which people fell into the sea.
I never returned.

Gravesend swings back and forth
like a window in the wind. It is named
for the fact that you never returned. It bears
the name of a man who disappeared in plain sight
in the town square on a sunny day.

I’m fascinated how Swensen manages to wrap fact, fable and story together into such a strong and cohesive mesh, writing out this English town at the mouth of the Thames. But how does one move from French gardens to an English port town of some fifty-six thousand inhabitants? Many of the poems stretch their way across the page in familiar Swensen poetic forms, but other sections write like prose, such as the trilogy of poems “Interview Series,” suggesting a more formal or informal series of interviews to comb through the facts and fables of the centuries-old town. The notes at the end of the collection confirm this, citing a list of interviewed for the first and third pieces, writing also that the “interviewees for the second interview were various people living in the town of Gravesend, Kent, England in the summer of 2008; I did not take their names, and I have not used their exact words.” Part of “Interview Series 2” reads:

The Three Daws is arguably the oldest pub on the Thames, and, as I’ve been reminded by at least five people in the village, it plays an important role in Great Expectations. I ask the barmaid what she thinks of the name Gravesend. Gravesend? It’s a good name. It’s in the Domesday Book. We used to have more pubs in this town than in any other town in England. Ghosts? You’re writing a book on ghosts? This place is full of them. It’s the oldest pub on the river. They say Pocahontas died here. No, I mean here, in this pub, that’s what they say—and why not believe it? No, I’ve never seen a ghost, but I’ve heard one. I’ve been down here in the bar, and heard someone walking directly above me when I knew that no one could be up there. And bottles fly off the shelf sometimes, or chairs get up-ended. Everyone who works here has a different story; we all feel them.

The book exists in three sections, hinging on the three question-titles posed, from “Have you ever seen a ghost?” to “How did Gravesend get its name?” to “What do you think a ghost is?” Each question suggests an opening as opposed to furthering any particular agenda, suggesting too that poems were composed out of the variety of answers, thusly answering for the variety of forms and rhythms Swensen writes. If we are as much constructed from the stories we repeat, so too, historic Gravesend, making this perhaps, through Swensen’s eye, the truest depiction of the city and its inhabitants. Or perhaps the ghosts of such.

Sometimes the ghost arrives before the body is gone and the breath which will one day white, there will be walls, or illness may be the cause and cause the ghost to crawl up inside, a bright

illness, when the eyes go, and the ghost walks around looking like you, and we talk quietly, and she says things I remember your saying, but at the time they were out of context and made no sense, and now I look around the room that fits. And I walk across the room with my eyes closed

Posted by rob mclennan at 9:01 AM
Labels: Cole Swensen, University of California Press

Thanks so much, Rob, for your constantly fabulously attentive readings of people's works! And thanks for this one, specifically. I thought it might be interesting to send, too, the information that's going out on the press release because it addresses an aspect of the book that is particularly important to me. That text is:

“Ghosts appear in place of whatever a given people will not face” (p. 65)

The poems in Gravesend explore ghosts as instances of collective grief and guilt, as cultural constructs evolved to elide or to absorb a given society’s actions, as well as, at times, to fill the gaps between such actions and the desires and intentions of its individual citizens. Tracing the changing nature of the ghostly in the western world from antiquity to today, the collection focuses particularly on the ghosts created by the European expansion of the 16th through 20th centuries, using the town of Gravesend, the seaport at the mouth of the Thames through which countless emigrants passed, as an emblem of the ambiguous threshold between one life and another, in all the many meanings of that phrase.