Nicole Markotić, Bent at the Spine

"No such thing as a prose poem"

mumbled the Cyclops. shining her black leather eye patch. hard plastic mimics cement. trial children leap the ladder. rig construction tumbles into the valley of faraway. yearly postcards line the ceiling. goes to show how many pairs of boots fit into one box. x-rated continues his morning breakfast to read that crocodiles have no tongue. except when he looks inside one there brags the rogue organ. not tied or mangled just limp and jaded and only slightly extinct

the font fades and 14 pages blew out the side window. well isn’t that the way we harbour plot-line? each glottal stop opens the throat. treat me to a new typeface or send metre back to the morgue. each flyleaf remembers its copyright. true. each stammer confesses to grammar health

heroin could contradict this story or you could pretend these words belong to the same sentence twice. every time you save your breath, Hypothetical Barbara takes a bath

It has been a while since a poetry collection by writer, editor and critic Nicole Markotić, and the publication of Bent at the Spine (Toronto ON: BookThug, 2012) furthers an investigation into the sentence that began in her two previous poetry collections – Connect the Dots (Toronto ON: Wolsak & Wynn, 1994) and Minotaurs & Other Alphabets (Toronto ON: Wolsak & Wynn, 1998) – as well as through two novels – Yellow Pages: a catalogue of intentions (1995) and Scrapbook of My Years as a Zealot (Vancouver BC: Arsenal Pulp Press, 2008). Her prose is fantastic, and Yellow Pages, a novel about silence, is one of my favourite [I included it some time ago in such a list of favourite Canadian novels]. Much of her work as a poet focuses on the prose poem, and she is one of the few Canadian writers exploring the form, a variant on what some others such as Jonathan Ball and Jason Christie have been more recently exploring. In her essay, “New Narrative and the Prose Poem,” she writes: “My interest in this form begins at the level of the sentence.” It reminds of a fragment of an interview with Lisa Roberson I keep quoting (by Kai Fierle-Hedrick in The Chicago Review 51:4/52:1, spring 2006): “I’m really a gentleman collector of sentences. I display them in cabinets.” In the same essay, Markotić writes:

I am interested in a dialogue about “new” narrative, which is perhaps not so much new, as newly theorized. Many prose writers do not consider themselves fiction writers, yet at the same time are not really part of on-going poetics discussions which, for the most part, do not focus on narrative. Although I also write prose fiction, I consider my prose poetry and other alternative, interdisciplinary, and innovative sentences to be a neoteric prose that both challenges and expands language boundaries.

For me, the prose poem is a poetic strategy embedded within the structure of narrative, and a feminist response to patriarchal language and forms. By embracing both prose syntax and poetic disruptions, the prose poem defies conventional linear grammar and refuses to satisfy my desires for either poetry or story. My desire is for so much more than causal, linear, rational and persuasive normative sentences. In my novel and in my poetry, I try to live between the prose of narrative and the fulfillment of the habit of fiction.

Carved into a series of structurally-themed sections, the first sequence/section, “Big Vocabularies,” jangles and sparks with a crackle and pop, as the opening of the four-poem piece begins:

West of the coulees, the river jogs, the hoodoos idle, the
poem immobilizes

If, in deo, a cheese-grater replaces the blender, do you waffle
the deco art? 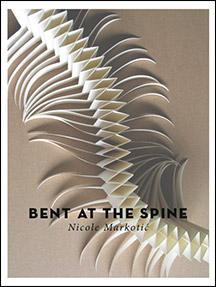 Some of the most striking pieces in the collection exist in the section “Widows and Orphans,” which also appeared as a chapbook with Vancouver publisher Nomados in 2004 [see my review of such here], a collection (if recollection serves) of poems that bounced off titles taken from overheard conversation (such as the piece above, “No such thing as a prose poem,” where you can easily hear the jagged bounce of Paul Celan influence). Riffing off found lines in a blur between poem and story, the pieces as much respond to the title/line as bounce clear of the line, going far further afield. Throughout the collection, her cadence and lines shift, altering punctuation and breath-lines, holding only to the consistency and purposes of each section, and each poem, itself. The section “guests” plays with the structures and content of various poet friends and/or mentors, writing a variant on George Bowering’s Curious (Toronto ON: Coach House Press, 1973), as well as a number of recent threads through his poetry since. Some of her subjects include Bowering himself, as well as Robert Kroetsch [see the piece here, produced as an above/ground press broadside], Margaret Christakos, Dennis Cooley, Fred Wah, Susan Holbrook, Daphne Marlatt, Erin Mouré and Phyllis Webb, among others. Circling the referential, the best of these poems work deeper into a reaction and response to the writers and their works.

Dear Phylly: What follows is a sort of rant, a champagne-laden, bowl-shaped, opal and naked harangue. Alongside you, not hurtling. They say you are solely a woman, and that you write poetry that doesn’t mess up the universe. They’re wrong: Pauline still reads the books you haven’t yet written. She’s plotting to reinvent herself as D-eye-anna with an “I” and to change the course of Canadian coffin texts. You refuse to publish because you refuse to write. So they say. How am I to respond? What imitation? What emulation? You write of the “Baby Ex Machina” as if we recognize that baby, as if the Machina is never In. someday, your autobiography will explode and I shall become ugly. If lucky. You once said an animal cannot forever on them on them on them? Will I? Pumping blood, your Venus fly-trap undercover spider opens a ventricle. A spy spied. By whom? you may ask. By the useful. By the dozen. By the sliver of the zinc-plated satellite. Sometimes I hear you writing in between the inbetweens. Because after condemned flames, what? Charlatans, rogues, the usual muse stand-ins. I won’t listen, but Pauline keeps reading with my fingertips.