The earliest indications of human attempts to intervene in the workings of the river date to the early 13th century. It was the Canal du Moulin, built to connect the Gave with the River Ousse in order to ensure a steady supply of water for the seigniorial mill, built in the lower town, just below the chateau.

Go. Water always, in one way or another, says go. And the wheels of it, and the grind within, grounded in, until hundreds of mills filled in the region, a whir in the wind that was taken for wind. 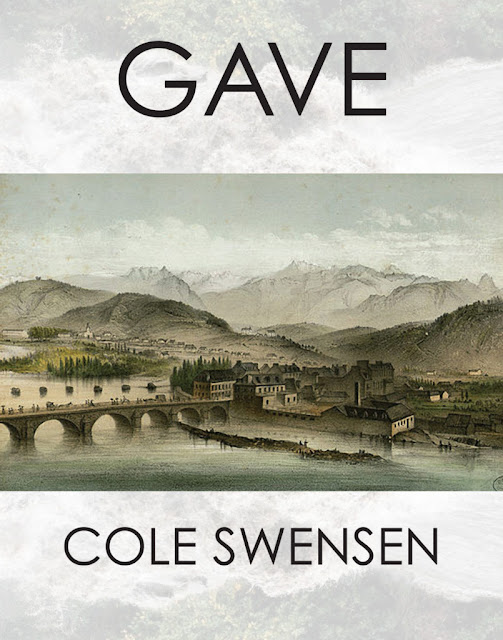 American poet, translator and editor Cole Swensen’s latest poetry title is Gave (Oakland CA: Omnidawn, 2017), a book-length suite of poems centred on the Gave de Pau, a river in southwest France. As she writes to open the collection: “in the regional language, the word ‘gave’ means a torrent and is used to designate a major river. Though there are many gaves throughout the area, in the following text, when the word ‘gave’ is used alone, it refers to the Gave de Pau, and in particular, to that stretch of the river that has been historically linked to the city of Pau and the communities immediately surrounding it.” Swensen has long been fascinated, it would seem, on the medieval histories and landscapes of France, specifically on how humans have attempted to domesticate the landscape (from her engagement with a variety of elements from the Medieval period and into the Victorian, from gardens to architecture to painting to gravesites). In Gave, Swensen composes an intriguing structural binary through the narrative, utilizing prose poems that are more informative against poems constructed out of fragments and staggered lines in a curious echo of work by Susan Howe (but blended, as opposed to the more defined lineations between Howe’s prose and collage-poems). As she writes:

a few examples of
the curve and
of the turn and of the return
of
yet never
even if you were to weave it from the grasses
would it encircle
or ever offer
a figure with a center.

With over a dozen titles to her credit, Swensen constructs poetry books as exploratory studies, the results of which are comparable to similar works by Anne Carson, Susan Howe, Pattie McCarthy and Shannon Maguire, for their ability to refuse the straightforward, and delve book-deep into her subject’s rather nebulous concrete for the sake of the poetic. In many ways, Gave is a book on the river and where the river meets human interaction, interference and industry, constructed as a portrait of that interaction, and the potential one-sided cost upon the Gave.

The Gave de Pau is a tributary of the Adour, which runs into the Atlantic at Bayonne. One hundred and ten miles long, its source is on the French-Spanish border in a spectacular group of peaks known as the Cirque de Gavarnie.

Nine thousand feet up, the river begins in a 1,450-foot waterfall, then winds down through rugged terrain collecting the waters of the Gèdre, the Gave do Héas, the Bastan, and the Gave de Cauterets along the way. It joins the Gave d’Oloron just above Peyrehorade, after which they are known as the Gaves réunis until they join the Adour seven miles later.

At its height, usually in May, fed by melting snow and rain falling in a catchment area of over 1,000 square miles, its flow averages 4,275 cubic feet a second. The runoff it collects is one of the most abundant in France. And like all major rivers, it importantly contributes to the economic, political, and social dynamics of all the cities, villages, and farms that it passes by and through.

Posted by rob mclennan at 8:31 AM
Labels: Cole Swensen, Omnidawn

I am so everfresh in love with Swensen's syntactic torques.