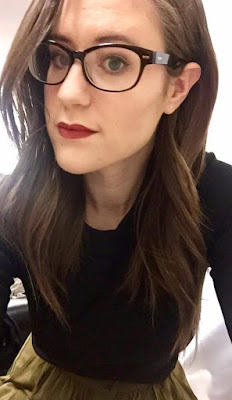 Emily Izsak is in her second year of U of T’s MA in English and Creative Writing program. Her work has been published in Arc Poetry Magazine, The Puritan, House Organ, Cough, The Steel Chisel, The Doris, and The Hart House Review. In 2014 she was selected as PEN Canada’s New Voices Award nominee. Her chapbook, Stickup, is available on woodennickels.org and her first full-length collection, Whistle Stops, will be out in April 2017 from Signature Editions.

1 - How did your first book or chapbook change your life? How does your most recent work compare to your previous? How does it feel different?
My first chapbook was really just compilation of everything I had done up to that point that felt half decent. I had more of a concrete plan when I began writing my first full-length book. I like Whistle Stops more than anything I have ever written. Once, while I was working in a pottery studio (shouts out to Clay Design), a customer asked me if I was a potter. I told her no, that I was a poet. She responded, “well, you’ll figure something out someday.” Having a book makes me feel like I’ve figured something out and like calling myself a “poet” isn’t so presumptuous.

3 - How long does it take to start any particular writing project? Does your writing initially come quickly, or is it a slow process? Do first drafts appear looking close to their final shape, or does your work come out of copious notes?
It takes me anywhere from an hour to a few hours to write a poem (and I write fairly short poems). I sort of have notes. I usually collect a bunch of words that I like on a page in the document I’m working on and whenever one gets used in a poem I’ll remove it from the bunch. First drafts and final drafts would look pretty similar to people who aren’t me, probably, but little edits (changing a word here and there or taking out an article) make a big difference to whether or not I feel like a poem is finished.

4 - Where does a poem usually begin for you? Are you an author of short pieces that end up combining into a larger project, or are you working on a "book" from the very beginning?
Definitely working on a book from the beginning (my first chapbook is an exception). I don’t think I could go back to writing individual pieces. I like how poems in a book can coalesce and call back to each other and also there’s less pressure on each individual poem to be all-encompassing.

5 - Are public readings part of or counter to your creative process? Are you the sort of writer who enjoys doing readings?
I’m not good at public readings. My voice isn’t particularly loud or dynamic. I like hearing people laugh at the jokes in my poems, though. I also like being around other poets. Reading in public is like getting a back massage at a spa—vulnerable, a little awkward, but ultimately feels good. I’ve never been to a spa.

6 - Do you have any theoretical concerns behind your writing? What kinds of questions are you trying to answer with your work? What do you even think the current questions are?
How can we represent gender in literature without relying on anatomy or stereotypes? If language can’t represent reality, can it represent unreality? Can it create its own reality? How do trains work? What is sexy?

8 - Do you find the process of working with an outside editor difficult or essential (or both)?
Essential– but also, the opposite of difficult– splendid, wonderful, joyous. Nobody will ever read my work as closely as an editor. Also, I’ve had the pleasure of working with some fantastic editors including the legendary Victor Coleman and of course Garry Thomas Morse who solicited Whistle Stops before it existed and sends me relevant Youtube videos whenever I need them most.

9 - What is the best piece of advice you've heard (not necessarily given to you directly)?
“Get rid of the fucking similes” —Victor Coleman

10 - How easy has it been for you to move between genres (poetry to critical prose)? What do you see as the appeal?
They’re very separate things. I write prose much faster than I write poetry. Most of the prose I write nowadays is about television shows I like.

11 - What kind of writing routine do you tend to keep, or do you even have one? How does a typical day (for you) begin?
Deadlines are the best. If I have a deadline, I’ll get shit done. If I don’t, I’ll write when I feel like it (which is usually one poem a week).

12 - When your writing gets stalled, where do you turn or return for (for lack of a better word) inspiration?
Other poems.

13 - What fragrance reminds you of home?
Paprika.

14 - David W. McFadden once said that books come from books, but are there any other forms that influence your work, whether nature, music, science or visual art?
I like stand-up comedy, particularly Louis CK, Maria Bamford, Stewart Lee, and John Mulaney. They all have a really good sense of rhythm and timing that has probably influenced my work.

15 - What other writers or writings are important for your work, or simply your life outside of your work?
Mina Loy, Jack Spicer, Allen Ginsberg, Gertrude Stein, William Carlos Williams, bpNichol, Victor Coleman, Michael Boughn, Michael Harman.

16 - What would you like to do that you haven't yet done?
Make a video game.

17 - If you could pick any other occupation to attempt, what would it be? Or, alternately, what do you think you would have ended up doing had you not been a writer?
Pastry Chef.

18 - What made you write, as opposed to doing something else?
There were things I wanted to read that didn’t exist yet… like poems about my specific boyfriend.

20 - What are you currently working on?
A series of poems on the mating dances of tropical birds and how that relates to gender and performativity and theatre and modern sex. I’m still figuring it out.