In the beginning there was nothing but immediacy

a continual source of forgetting
that doesn’t need us

from one to the other, it looks like slight-of-hand
whose expression would keep a secret
though the secret is not its own

in the end, a sacrificial yellow strikes y eyes
the body won (“Overyellow: The Dissolution”)

Translated by Cole Swensen is Nicolas Pesquès OVERYELLOW: The Poem as Installation Art (Anderson SC: Parlor Press, 2017). The sixth volume in his “The North Face of Juliau” sequence of poetry books, this is but the third translated into English (also by Cole Swensen), alongside Physis (Parlor Press, 2006) and Juliology (Counterpath, 2008). As the preface to the current collection reads:

Nicolas Pesquès has been working on a single project for over twenty years: La face nord du Juliau (The North Face of Mount Juliau); it’s now twelve volumes long. On the one hand, it’s a work about place—about the attempt to construct, through writing, the possibility of place in the external world It’s an attempt based on the recognition that the “external world,” too, is constructed of and through language, and so Pesquès interrogation of the mountain that dominates his landscape becomes an interrogation of language, of how it brings us the world and how it simultaneously denies us access to it. But on the other hand, the series is also—one could even say, is only—about color, about the irrepressibility and the impact of the vivid. Slowly going throughout the collection is a suggestion that color is alive in a way that nothing else is. 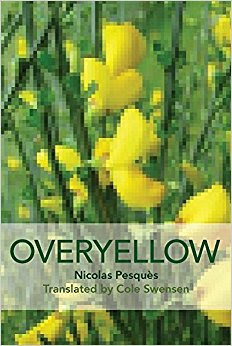 The poems in OVERYELLOW: The Poem as Installation Art are composed as an extended, single lyric, abstractly circling yellow and its concept, “OVERYELLOW,” writing: “OVERYELLOW is the name of the god of labor and the lively // a reclining body that watches us, its breasts seized by diction / making the hill come forward[.]” The idea of writing poems-as-installation are intriguing, and the abstract of Pesquès’ lyric deliberately evade the concreteness he suggests, composing something that exists momentarily, here and there; it is almost as a trick of the light, poems shifting in and out of focus, masterfully evading the possibility of anything too firm or solid. In Pesquès’ OVERYELLOW: The Poem as Installation Art, the light is magnificent.

This project is based in the hope that the forest of broom will
happen again.

This object condenses and runs it.
It enlarges the circle, the mirror of the estate. It spreads the brain.

Like, at the end of the road, a wall of air.