Morgan Parker, There are more beautiful things than Beyoncé

Another Another Autumn
in New York

When I drink anything
out of a martini glass
I feel untouched by
professional and sexual
rejection. I am a dreamer
with empty hands and
I like the chill.
I will not be attending the party
tonight, because I am
microwaving multiple Lean Cuisines
and watching Wife Swap,
which is designed to get back
at fathers, as westernized media
is often wont to do.
I don’t know
when I got so punk rock
but when I catch
myself in the mirror I
feel stronger. So when
at five in the afternoon
something on my TV says
time is not on your side
I don’t give any
shits at all. Instead I smoke
a joint like I’m
a teenager and eat a whole
box of cupcakes.
Stepping on leaves I get
first-night thrill.
Confuse the meanings
of castle and slum, exotic
and erotic. I bless
the dark, tuck
myself into a canyon
of steel. I breathe
dried honeysuckle
and hope. I live somewhere
imaginary. 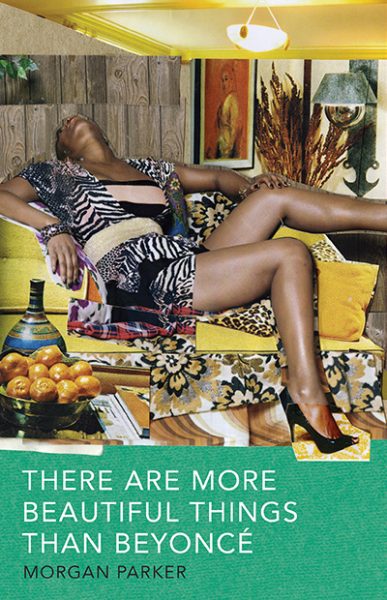 I’ve been enjoying the vulnerability and swagger of Brooklyn, New York poet Morgan Parker’s There are more beautiful things than Beyoncé (Tin House Books, 2017), a pop-culture mélange of daring, playful and fiercely smart lyrics. There are elements of Parker’s There are more beautiful things than Beyoncé that are reminiscent of some of the earlier work of Toronto poet Lynn Crosbie (best evidenced through her selected poems, Queen Rat [see my review of such here]), for their shared mix of contemporary pop culture, vulnerability, bravado and first-person flâneuse. As Parker writes to open “Poem on Beyoncé’s Birthday”: “Drinking cough syrup from a glass shaped / Like your body I wish was mine but as dark / As something in my mind telling me / I’m not woman enough for these days […]”

I find poems engaging contemporary pop culture, whether this collection or even Sarah Blake’s Kanye West-inspired Mr. West (Middletown CT: Wesleyan University Press, 2015) [see my review of such here] far more compelling than poetry collections centred around historical cultural figures (The Beatles, for example). Where some of those other collections engage with a kind of nostalgia, Parker, through writing Beyoncé, Drake and Michelle Obama (among others), instead engage with more contemporary matters, such as how it is to be black and female in America, circling out into larger issues of the price of fame, negotiating love, sex, friendships and other engagements, composing a larger canvas of studies on how to simply live and be in the world. The openness and vulnerabilities displayed in Parker’s poems are quite striking, even as she plays with familiar tropes in fresh ways, such as her poem “13 Ways of Looking at a Black Girl,” riffing off Wallace Stevens’ oft-altered “Thirteen Ways of Looking at a Blackbird” (from his 1923 debut collection, Harmonium), that includes: “I am hungry  for myself […]” There is even a riff on Canadian writer Lawrence Hill’s 2007 novel (and subsequent miniseries), The Book of Negroes, in her own poem of the same name, that includes: “This book is uncorrected proof. You read it / on your eyelids. You sleep under it. // You give it away. You tear out whole chapters. / You say you read it but you didn’t.” The third poem in her triptych reads:

You see the commercial on BET
while you’re painting your nails.

The women are only crying.
The slave cabins are dull. You’re trying

to text this dude: Negro, please,
why sleep when the world so bad.

For him you would be pumice shined to pearl.
He makes you wanna write your name.

Everybody has an opinion.
You shiver and it is permission.

This is a poetry collection that holds a great deal of wisdom and lively energy (and one that is clearly improved through live performance), and was an absolute delight to read. One can only imagine (and hope) that Beyoncé herself was equally charmed.