Do you want a beer, he asked
the child lying in the coffin.
Looks like you could use one,
and don’t forget your chores.
He never liked that boy
though he’d never seen him before.
He liked to sneak into funerals
and turn corpses into drunks.

It wasn’t much of a career but
it paid the bills and offered satisfaction.
No one ever asked who he was,
he had no distinguishing features.
Time, he said, is on my side.
He clutched a beer. He coughed. He died. 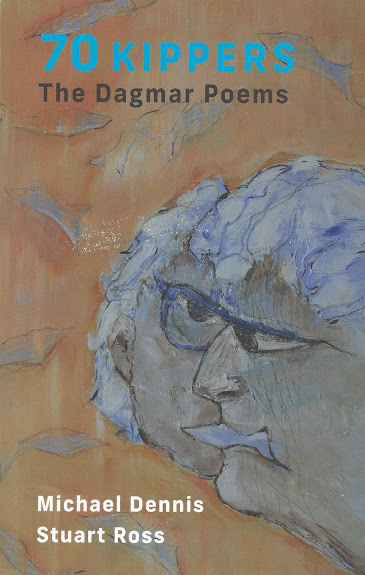 The latest from Ottawa poet Michael Dennis and Cobourg, Ontario poet, editor, publisher, writer and bon vivant Stuart Ross is the full-length collaboration 70 Kippers: The Dagmar Poems (Cobourg ON: Proper Tales Press, 2020). The back cover offers: “Two pals. / Two very different poets. / One kitchen table. / Several bottles of wine. / 6 writing marathons over 3 years. / 122 collaborative poems. / 70 kippers. / A book of poetry. / An act of love.” Both Dennis and Ross have been writing and publishing since the late 1970s—only a few years longer than they’ve known each other—as two poets existing entirely outside of the academic system, quietly going about their work, from their respective corners of Ontario. Throughout seventy numbered poems that make up 70 Kippers: The Dagmar Poems, their shared explorations of narrative overlap and blend, and one can see elements of Dennis’ darker working-class mixed with Ross’ surrealism. For anyone aware of their individual works, it is a curious mixture, such as in the thirty-eighth poem, that reads: “In another country no one would complain / about the conditions under which dogs / dreamed like cats, saved like squirrels, / barked like llamas, under the billowing / animal cracker cloud sky. / Things couldn’t be better / or worse, he complained.” What is immediately clear is how this project is very much a conversation between friends, and the pull and push between their aesthetics, composed as a snapshot of what has been an ongoing conversation going back years. As they write in their “Authors’ Note” at the back of the collection:

These poems were written at Michael Dennis’ kitchen table on Dagmar Avenue in Vanier over six marathon writing sessions, the first on August 3, 2014, and the last on October 2, 2017. At each marathon we wrote 20 poems (well, 22 at the last session) simultaneously and collaboratively. We each began with 10 sheets of lined paper and wrote a first line on each. We shuffled the sheets and passed them across the table, where the other of us wrote a second line, shuffled the sheets, and passed them back for a third line. This process continued, and as we unilaterally declared a poem completed, either by adding a final line or seeming our collaborator’s line the ending, we placed that poem on the floor under the table. We did not discuss the poems as we wrote, though we often laughed and cursed each other. Each writing session began around eight in the evening and lasted three hours and 15 minutes. Wine was consumed, always red. Once the last poem met the heap under the table, we retrieved the batch, straightened out the stack, and read them all aloud. In late 2018 and early 2019, we whittled the selection down to 70 kippers—I mean, keepers—and did some editing, which occasionally skewed the alternating-line sequence when a line or several lines were excised. Sixteen of those poems, in slightly different versions, appeared as the chapbook The Dagmar Poems, from Burnt Wine Press. we only had one fight in the process. It’s long behind us.

Dennis’ most recent full-length collection is Low Centre of Gravity (Vancouver BC: Anvil Press, 2020) [see my review of such here], a collection of first person lyric narratives following on the heels of his Bad Engine: New & Selected Poems (Anvil Press, 2017) [see my review of such here], both of which were edited by Ross. Ross’ latest full-length title is the poetry collection Motel of the Opposable Thumbs (Vancouver BC: Anvil Press, 2019) [see my review of such here], his eleventh full-length poetry title to date. One should note that the poems that make up 70 Kippers: The Dagmar Poems aren’t the first collaborations by either poet, as Ross has been working collaboratively for years, back to The Pig Sleeps (Contra Mundo Books, 1991), written with Vancouver poet Mark Laba, and his collaborative novel with Gary Barwin, The Mud Game (Toronto ON: The Mercury Press, 1995). Ross even published a collection of short poem collaborations he wrote with twenty-nine different collaborators in In Our Days in Vaudeville (Toronto ON: Mansfield Press, 2013) [see my review of such here]. The collection included five poems that Ross composed with Michael Dennis. Composed roughly a decade prior to the earliest poems in 70 Kippers: The Dagmar Poems, the poems in In Our Days in Vaudeville are different in tone, and more separate, as though each were still feeling out the other’s voice and cadence, feeling their ways into and through each poems. From that earlier collection, the poem “GROCERY SCHEDULE,” for example, leans more on the side of Ross’ surrealism than Dennis’ plainspeak, and reads:

Pepper, onion, mushroom, toilet paper,
newspaper, wax paper, paint chips:
with these on my shopping cart
I sing the body electric. You once had
perfect pitch, but you pitched it
away on transparent sheets of anger.
Now when we bind our wrists,
try to harmonize, repair our flaws,
salve our wounds, connect our
furtive glances to hope, bob our
apples, clear our throats—
two things happen:
guess which ones
they are. Splendid
or not so resplendent,
our lovers giggle and preen
like sombre botanists.
Geological time ebbs,
buddy. The train stops here!
Now!

As Ross wrote as part of the introduction to In Our Days in Vaudeville: “One evening in the mid-2000s, I sat down in the Ottawa kitchen of my long-time friend, the very prolific poet Michael Dennis—who had never written a surreal phrase in his life—and we cracked open a bottle of wine. I suggested we write a collaborative poem, one word at a time, passing the sheet of paper back and forth. Then we did another poem, two words at a time, then three, then four. I think we got to about seven words at a time before we called it quits for the night. Again, I found myself involved in poems that contained words and phrases and lines that would never appear in my solo work. I loved the hybrid that we created. It deepened our understanding of each other’s work, and it deepened our friendship.” The progression over that decade, the more they worked together so directly, is interesting, and adds layers of possibility to each of their work. I’m always curious to try to understand how collaboration might broaden the scope of any individual author’s solo work, although perhaps this is something that might not always be possible to understand consciously, or possibly articulate.

A small-mouth bass looked at me.
I could swear he mouthed the word help.
My wife said fish don’t talk, but
she’d been wrong before.
I turned my back on her, threw the fish a rope.
That’s when we toppled into the green water.
Things were different between us here.
I realized the fish had been an ally
feigning distress to repair a marriage.

Surprising what fish know
about humans (who they call Gill Sans),
just like the former Leafs defenceman
Todd Gill, who had three shoulders,
and used them all, the small-mouth,
the medium-mouth and the large-mouth.
Hooked like and sinker.