You excavate anything that has tried to lodge itself
in your body without permission. You bury the toothbrush
between your back molars and scrape whatever

you find. One loss makes you feel all other losses.
Eleven years later, when you no longer eat pizza
or speak Spanish, when your father’s profile invades

your clenched jawline, you borrow his brisk gait,
his snort, his face. People say you look white.
Your father never does. The restaurant won’t seat

you, the hostess says neither of you meet the dress
code (your father’s wearing a double-breasted suit).
You are a man trying to roll your r’s again. Where did

the words go? You are still trying to retrieve the sounds
you once dreamed in. You hardly remember your mother
tongue. You are trying to pull something useable from

the wreckage. Yet it all feels familiar. Your best friend
compliments your clean pronunciation, the way you have
learned to get go of everything you once called home. 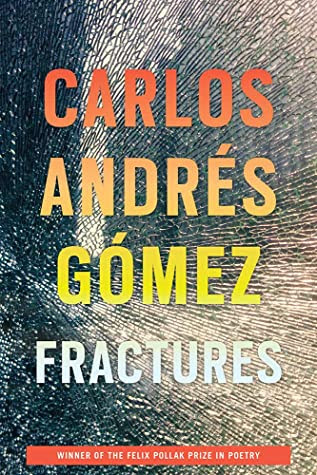 Described as a “Columbian American poet from New York City,” Carlos Andrés Gómez is the author of the full-length debut, Fractures (Madison WI: University of Wisconsin Press, 2020), winner of the Felix Pollak Prize in Poetry. Fractures is a book of breaks and about what might crumble, but not necessarily fall apart. “Shoulder and soldier were the same / word.” he writes, to open the poem “WHEN TWO WORDS FRACTURE THE MIRROR,” “My fumbled speech less / that of an immigrant’s son, now / able to make something of / the white noise that claimed / everything.” Gómez writes of breaks of language and experience, an intricate narrative interrogating culture, personal histories, homophobia.

Fueled by a narrative precision that includes the occasional looseness, all of which ripples outward from a passionately held core around identity and belonging. There is the who we are versus who we wish to be, and the how we are perceived versus the how we wish to be, all of which has the potential for collision and conflict. “Sometimes I search for the exact day / I stopped dreaming in the language / that sings my name.” he writes, as part of “NATIVE TONGUE.”