Kate Sutherland, The Bones Are There

We were led astray by the unreliable map
Had we sailed E by N instead of SE by E
we should have reached the American mainland
in eight days. The map must have been false
We must have skipped across the so-called
Juan de Gama’s land. I suspect the gentlemen
who drew up these charts obtained their knowledge
from visions. It is an easy matter to sit in a warm room
setting down on paper distorted accounts
and guesswork. If they must exercise imagination
let them keep their reveries to themselves
We did not find land there, not the least trace of it
Not birds, driftwood or seaweed. By July 14th
half our water was gone

Toronto writer and lawyer Kate Sutherland’s latest book is The Bones Are There (Toronto ON: Book*hug, 2020), a continuation of some of the work of her debut poetry collection, How to Draw a Rhinoceros (Book*hug, 2016) [see my review of such here], writing out an exploration of lost species utilizing an array of archival material. “We cannot now hope to procure a living solitaire,” she writes, as part of the second section, “though every part / of the skeleton could doubtless be found in the caverns of Rodrigues [.]” As the back cover of The Bones Are There attests: “Zigzagging across the globe, Kate Sutherland’s fourth book is poetry by the way of collage: pieced-together excerpts from travellers’ journals, ships’ logs, textbooks and manuals, individual testimony, and fairy and folk tales that tell stories of the extinction of various species, and of the evolution of human understanding of—and culpability for—the phenomenon.” The Bones Are There is, as one might expect, a book of acknowledgements, archaeological searches and of writing out the bones of the lost, and the dead. As she writes, further on in the second section: 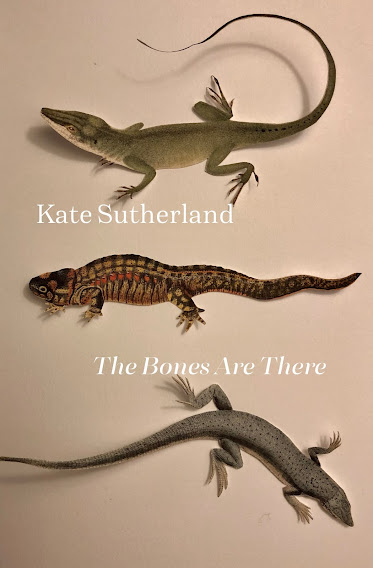 Composed in three sections—“Beasts of the Sea,” “The Bones Are There” and “Familiar”—the first of which appeared as a chapbook through knife│fork│books in 2018 [see my review of such here], I find it curious her use of punctuation, such as in the short lyric poems in the first section (an example being “The Map,” above). Whereas the periods within the lines speak to a structure of sentences, as do her use of capitals, she doesn’t include a period at the end, suggesting the rhythmic and line-break might be enough to suggest the end of one line or phrase before the beginning of another. The effect is curious, and quite subtle, such as in the opening of “Blue Foxes,” another poem from the opening section, that reads: “We were far too busy killing blue foxes / knocking them down with the axe, stabling them / The more of them we killed, the more / malevolent and audacious became the others [.]”

I do find it interesting the shifts in Sutherland’s writing, moving from two short story collections both published by Thistledown Press—Summer Reading (1995) and All In Together Girls (2007)—to two poetry titles-to-date (published by Book*hug) that focus on extinction and the archive, writing out elements of evolution, ecology, exploration, journal writing, and the (as the back cover of The Bones Are There writes) “legacies of imperialism, colonialism, capitalism, and misogyny, charting the ways in which they juxtapose one another while impacting the natural order of things.” Her poems move from those in the voice of those exterminating species as they move across new landscapes to a series of reports on the dead, executed and collected. There are elements of her writing that are reminiscent of other poetry titles constructed out of journals, from George Bowering’s George, Vancouver (Weed/Flower Press, 1970) to K.I. Press’ Pale Red Footprints (Pedlar Press, 2001) or even to Lisa Robertson’s The Weather (New Star Books, 2001). She utilizes the archive; not as an end, but as a way in which to examine, articulate and critique. Sutherland writes the ways in which others, from animals to people, particularly women, are victimized through the conquest of capitalism, colonialism and conquest. As Sutherland writes as part of the third section:

About midsomer last. Olive Barthram fell out with Joan Jorden and devised to afflict her with witcheries. First Olive sent three toads to trouble Joan in her bed, not suffering her to rest. The first, being teased out into the middle of the chamber, returned and sat croaking on her bedside until thrown from the window. Within a few days another came and vexed her and it was taken and burnt. After came the third which Joan was counselled to burn herself. Going downstairs to do so, she was violently flung to the foot of the stairs and lay there a while for dead. Simon Fox put the toad into the fire and when it began to burn, a flame arose where the toad lay when Joan fell. The flame grew so great that it seemed to them to endanger the house, yet no hurt was done.

On October 13, 2020, the publication date for this new collection, her publisher posted an interview with Sutherland, where she speaks of, among other subjects, some of what she’s currently working on, furthering her critiques of extinction through the lens of the archive:

I’m writing a sequence of poems about climate change using as my vocabulary only words that appear in the 1818 edition of Mary Shelly’s Frankenstein; or, The Modern Prometheus. Climate change is a predictable preoccupation for me given its role in the extinctions I explore and lament in The Bones Are There. And Frankenstein is proving a generative frame for thinking about it because of obvious connections with the theme of the novel and the conditions under which it was written (in the Year Without a Summer that followed upon the 1815 eruption of Mount Tambora), but also because of the ways that the climate crisis of our time can be linked to emerging scientific and economic discourses of that time.

Posted by rob mclennan at 8:31 AM
Labels: BookThug, Kate Sutherland