Kate Sutherland, How to Draw a Rhinoceros

I.
Almost 50 animals among extinction efforts greatest hunted increase is more of our rhinoceroses since southern this time than their 14,000 success stories short savannas protected population of numbers law inhabited international grass discovered currently by 1895 Africa 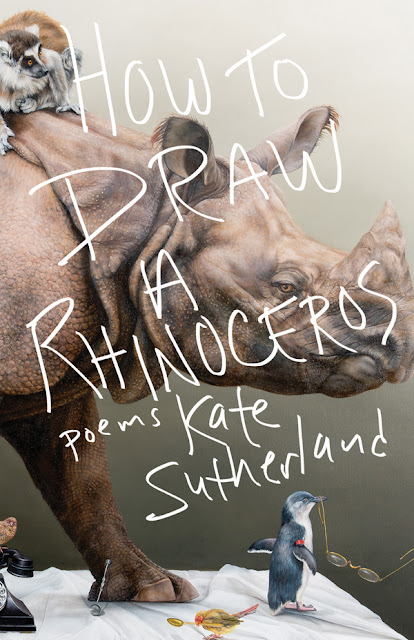 Some might know her through her two collections of short fiction—Summer Reading (1995) and All In Together Girls (2007)—both published by Thistledown Press, but Toronto writer Kate Sutherland is now the author of a poetry collection as well—How to Draw a Rhinoceros (Toronto ON: BookThug, 2016). How to Draw a Rhinoceros is a collage of narrative lyrics alongside denser poem-fragments, all stitched together from a variety of rhinoceros sources from the middle ages to the Victorian Era, “The Rhinoceros / or Unicorn of Holy Writ” (“O’BRIEN’S FOUR SHOWS”), and hunters such as Teddy Roosevelt, King George V and Ernest Hemingway, to the more contemporary trade in horn artifacts. The poems are constructed from extensive reading and research, and an awareness of a creature not often portrayed in contemporary poetry (I suspect centaurs and mermaids, even beyond lions, cats and dogs, achieve more ink), although I still have the plastic rhinoceros that accompanied Fredericton writer and artist Joe Blades’ poetry chapbook, Rummaging for rhinos (Ottawa, ON: Pooka Press, 1995). “Wombwell’s Royal Menagerie / hit the road in 1805 / not the first, but the biggest / fifteen brightly-painted caravans / to Pidcock’s four,” she writes, in part two, “George Wombwell (1777-1850),” of the sequence, “THE WILD BEAST MEN.” She continues:

Sutherland’s collection is a bit of a mix, from the playful, dense and inventive to narrative poems that rely a bit too heavily on research, but most of the poems live in the centre of those two sides, showcasing a perfect blend of form and function. Certainly, there are pieces here that I want more from, such as the aforementioned “THE WILD BEAST MEN”—one of a series of poems that do little more than offer me what I might be able to discover otherwise, but most of the poems here take elements of that research as a jumping-off point. The poem “GOING, GOING, GONE,” for example, utilizes her research and plays with it, instead of simply repeating facts, offering a list of the possible, even as they dissolve and disappear before our eyes. The first two of twenty “Lots” write:

Lot 2
Rhinoceros horn libation cup with magnolia in fitted wooden
stand, late 17th century
The base has a magnolia bud broken off and reaffixed with glue
adhesive

Really, the poems in Sutherland’s How to Draw a Rhinoceros that feel the most effective are those propelled not by narrative, but by the language, using elements of research and narrative as tools in which to further the sight and sound of the words themselves, such as “DÜRER’S RHINOCEROS,” “GREAT FAMILY OF GIANTS,” “OFFICIALS SAID” and “CONSERVATION,” among others. As well, the “Clara” poems that close the collection are quite wonderful, and reminiscent, slightly, of some of Stephen Brockwell’s “voice” poems (or even more playful versions of Michael Harris’ “Death and Miss Emily” poems). They include this short delight, riffing famously off “Romeo and Juliet”:

What becomes interesting in the collection as a whole is in seeing how the accumulation of different forms and perspectives effectively form together into a singular portrait, suggesting that the book’s title isn’t metaphoric but indeed, literal. This book is Sutherland’s portrait of a rhinoceros, sketched fully and fleshed out in a blend of fine lines and rough edges.