In this ad
for Newfoundland,
an old woman
steps onto the porch
of the lone house
on a remote cove
and shakes a white sheet
at a partly cloudy sky

with no one
wearing them 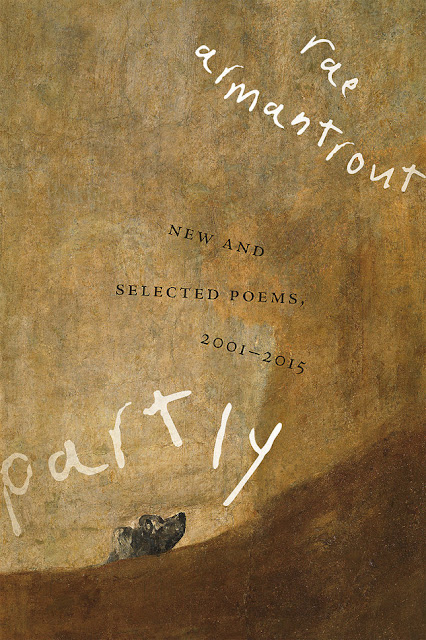 San Diego poet Rae Armantrout’s latest collection, Partly: New and Selected Poems, 2001 – 2015 (Middletown CT: Wesleyan University Press, 2016), provides a portrait of the award-winning poet’s past decade and a half, following on the heels of her first selected poems, Veil: New and Selected Poems (Wesleyan University Press, 2001). I’ve complained enough over the years about editions of selected and/or collected poems that lack introductions, so I’ll skip over that for now. Given that this is her second selected poems, one that deliberately begins after the previous one ends (I suspect, in part, because that other title is, one can happily inform, still in print), one of the curiosities of this new title is in how it allows readers of her work, both new and old, to be more aware of some of the shifts in her poetry over the years, and even between the two books themselves (oh, had only someone covered such in an introduction!). There is certainly a finer precision and density to her poems in the years since Veil appeared, one that has deepened with each new collection. Her poems revel in the indirect line presented in the most direct way possible, writing to the heart of a particular matter that might not have been immediately revealed, or even clear. Her poems meander in such a straightforward way that they become remarkably easy to misread, and yet, the simplicity is but one of precision, not ease; of an ellipsis that might lead to clarity, but not through the straight or obvious path. Her poems lead us to such places we don’t realize until we’re already there. In his “Foreword,” to Veil: New and Selected Poems, “‘Aloha, Fruity Pebbles’: The Poems of Rae Armantrout,” Ron Silliman provides a worthy overview of Armantrout’s work up to that point, writing:

In this sense, Armantrout belongs to what might be characterized as the literature of the vertical anti-lyric, those poems that at first glance appear contained and perhaps even simple, but which upon the slightest examination rapidly provoke a sort of vertigo effect as element after element begins to spin wildly toward more radical (and, often enough, more sinister) possibilities. Armantrout’s ancestors in this are not so much Lorine Niedecker, with whom she has been compared more than once, nor her teachers such as Denise Levertov, but rather Jack Spicer, Emily Dickinson, and Arthur Rimbaud.
It is pointless to characterize Armantrout’s writing as surreal as it is to identify it as an instance of language writing. Nowhere else in either tendency is there anything quite like these works. If they are often disturbing in their subtextual resonances, these poems are also remarkably cheerful and good-natured, written with an ear for (and eye to) American popular culture that is the most acute in contemporary poetry. Imagine David Lynch as rewritten by Frank O’Hara and you’ll be somewhere in the ballpark, except that Armantrout’s work lacks the claustrophobic mannerism of the former and the casualness (feigned or otherwise) of the latter.

Partly: New and Selected Poems, 2001 – 2015 spans the distance of her six trade collections produced since Veil: New and Selected Poems—all of which appeared with Wesleyan University Press—Up to Speed (2004), Next Life (2007), Versed (2009), Money Shot (2011), Just Saying (2013) and Itself (2015), as well as an opening section of some fifty pages of new material (including the title poem). Whereas considerations of culture, history and the larger world have long been part of her ouvre, her work since Veil has become more focused, tighter: more precise. As the collection Money Shot, for example, referenced the American financial crises, Just Saying explored the complex nature of the American economy. Part of the joy and play of Armantrout’s work, something referenced obliquely through this new book’s title, is in how she seems to revel in the fragment, whether the line or the stanza, employing thoughts that aren’t necessarily incomplete, but certainly thoughts that aren’t articulated out loud in their entirety, allowing or even forcing the reader to pay a far deeper attention. She writes in fragments, and yet, everything manages to interconnect, as she writes in the title poem from Up to Speed: “The Sphinx / wants me to guess. // Does a road / run its whole length / at once?” Armantrout writes so precisely and articulately about what might not be possible to precisely articulate. What does that even mean? Do you know what it is she stopped just short of telling us?

Wait, I haven’t found
the right word yet.

In a bright light
at the far end,
attractive strangers gesture.

They are searching
the system
for systematic threats.

I was going
to pay attention.

Attention passes
through a long cord

into the past
progressive