Anselm Hollo, The Tortoise of History

The Way They Pop Up Now

late in this life
the dead and the living

Technicolor
or black and white

different parts of the brain
begin talking to each other

looks out the window
thinks squirrels are not very contemplative

but the cats watching them are

There is a sweetness to the foreword by Anselm Hollo’s widow, Jane Dalrymple-Hollo, that opens the posthumous volume The Tortoise of History: poems by Anselm Hollo (Coffee House Press, 2016):

Could Anselm have possibly foretold
that The Tortoise of History, this peculiar compilation of old and new
musings, revisitations, letters to past and future, love notes
to friends—and to me

was an inevitable foreshadowing of this day, when I, his Janey
would stop the endless fuss, unplug the phone, sit quietly
for 20 minutes,

and then settle into his chair, in our kitchen
and read this book—aloud, in his cadence
and really take in

this “message in a bottle”? 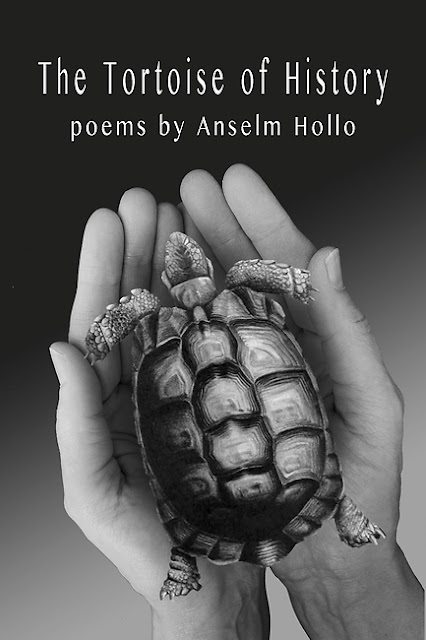 I’ll admit, my reading of the late poet and translator Anselm Hollo’s extensive work isn’t nearly as complete as it should be. My engagements with his more than forty titles is limited to but four works: the chapbook Tumbleweed (Weed Flower Press, 1968) (generously gifted from the publisher, Nelson Ball), and larger trade collections Maya (Cape Goliard Press, 1970) (generously gifted by Nicky Drumbolis), Pick Up The House (Coffee House Press, 1986) and Notes on the Possibilities and Attractions of Existence: Selected Poems 1965–2000 (Coffee House Press, 2001), meaning that my take on this posthumous volume is limited (at least, based upon what it could be). How does one easily assess a potential “last volume” by a writer with such a lengthy career? In the poems collection in The Tortoise of History, Hollo swivels his short meditations on small turns in short lyrics and the occasional longer sequence, composing staccato moment after moment in a first-person cadence that runs through the length and breadth of what I do know of his work, such as the poem “Crocus,” that reads:

The collection wraps up with an essay on the Greek poet Hipponax, via William Carlos Williams, and Hollo’s own take on the “halting meter” he discusses, through a sequence of poems. As Hollo opens his short essay:

William Carlos Williams ends Book 1 of his Paterson (New Directions 1992, p. 40) with a quote from John Addington Symond’s two-volume Studies of the Greek Poets, prefacing it with an “N.B.:”

“In order apparently to bring the meter still more within the sphere of prose and common speech, Hipponax ended his iambics with a spondee or a trochee instead of an iambus, doing thus the utmost violence to the rhythmical structure. These deformed and mutilated verses were called choliambi, lame or limping iambics. They communicated a curious crustiness to the style. These choliambi are in poetry what the dwarf or cripple is to human nature. Here again, by their acceptance of this halting meter, the Greeks displayed their acute aesthetic sense of propriety, recognizing the harmony which subsists between crabbed verses and the distorted subjects with which they dealt—the vices and perversions of humanity—as well as their agreement with the snarling spirit of the satirist.”

There is an echo of this quote, one that Williams found relevant to his search for a new measure, in the final lines of Book 5, the last complete installment of Paterson (p. 236):

We know nothing and can know nothing
but
the dance, to dance to a measure
contrapunctally,
Satyrically, the tragic foot.