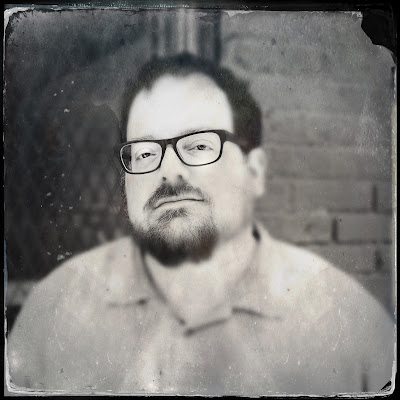 Tobias Carroll [photo credit: Jason Rice] is the managing editor of Vol.1 Brooklyn. His writing has been published by Bookforum, Men's Journal, Tin House, Hazlitt, and Rolling Stone. He is the author of the collection Transitory and the novel Reel. He's on Twitter at @TobiasCarroll.

1 - How did your first book change your life? How does your most recent work compare to your previous? How does it feel different?
As of right now, my first book is still about a month from its release date, so I’m not sure that I can answer this in full. That said, having a book accepted for publication was a definite boost to my confidence as a writer--that sense that someone else enjoyed this work enough to commit to publishing it. I’ve also been very lucky to be working with two presses--Civil Coping Mechanisms and Rare Bird--who each have an aesthetic that I really admire.

In the last few years, I started introducing surreal or fantastical elements into my fiction after staying mostly on the realistic side of things for many years. I’d say that’s the main difference there: making use of those elements where they felt appropriate.

2 - How did you come to fiction first, as opposed to, say, poetry or non-fiction?
In the late 1990s, I did a music zine called Eventide, which led to me doing some freelance music writing. Through a combination of the two, I met a guy who was starting a journal, small press, and literary website. He asked me if I wanted to write some fiction; I gave it a try and the habit stuck.

3 - How long does it take to start any particular writing project? Does your writing initially come quickly, or is it a slow process? Do first drafts appear looking close to their final shape, or does your work come out of copious notes?
It varies. For something longer, I usually have an idea of how best to make it work before I start writing. Sometimes shorter pieces vary wildly from first draft to final version. (And my novel Reel went through a whole lot of false starts before I found an opening that clicks.)

4 - Where does a work of fiction usually begin for you? Are you an author of short pieces that end up combining into a larger project, or are you working on a "book" from the very beginning?
Some of my stories have begun through prompts: my story “The Wenceslas Men” began its life when I was asked to write a cosmic horror story for a reading, for one thing, Others might begin with a specific image or location (the story “Winter Montage, Hoboken Station” comes to mind). The novel I’m working on right now is somewhat fragmented in its structure, and so far, two of the pieces within it have been published on their own. And I’d like to return to the narrator of the story “New Evidence of the Kings County Sasquatch” in something new, but the one attempt I made at it didn’t really work for me.

5 - Are public readings part of or counter to your creative process? Are you the sort of writer who enjoys doing readings?
I really enjoy doing readings. They can be incredibly useful on a very basic level–in terms of seeing how the language in a piece sounds, for one thing. And it can also be inspiring to see what other writers are doing, and getting a sense of what might be possible. There have been a few cases where hearing someone else’s story helped unblock me on something wholly unrelated that I’d been working on.

6 - Do you have any theoretical concerns behind your writing? What kinds of questions are you trying to answer with your work? What do you even think the current questions are?
The concerns that come up in my fiction tend to reveal themselves more after I’ve finished a story. I had a very bad experience many years ago when I tried to start with a theme first; the ensuing project ended up feeling all too heavy-handed.

As far as themes that interest me? What loneliness or solitude can do to a person is definitely one of them. It’s something that I find myself returning to repeatedly, even when I’m not entirely aware of it at first.

8 - Do you find the process of working with an outside editor difficult or essential (or both)?
I think it’s important; I’ve been lucky to have not had any serious disagreements with any of the editors I’ve worked with. I have gotten a lot of good feedback from editors, both in terms of my fiction and the nonfiction and criticism I write on a pretty regular basis.

9 - What is the best piece of advice you've heard (not necessarily given to you directly)?
A few years ago, I was house-sitting for friends. In their apartment at the time was a printout of an Eleanor Roosevelt quote, which I managed to misread. I believe the actual phrase is, “You must do the thing you think you cannot do.” In my mind, I read that as, “You must do the thing you cannot do,” which seemed very compelling.

10 - How easy has it been for you to move between genres (short stories to the novel)? What do you see as the appeal?
There are things you can do with a short story that don’t work as well for novels: experimenting with form is one thing that comes to mind. Some stories need 10 pages to tell; some need 200.

11 - What kind of writing routine do you tend to keep, or do you even have one? How does a typical day (for you) begin?
It varies somewhat. I freelance full-time, and sometimes finding the time in the middle of the day depends on how certain projects are going.

12 - When your writing gets stalled, where do you turn or return for (for lack of a better word) inspiration?
I try to have a couple of different projects going on at once, so that I can turn to something else if I’m blocked on another project.

13 - What fragrance reminds you of home?
I’d like to say pines, but that’s more idealized than anything. I grew up in central New Jersey, and so there aren’t that many smells that seem all that specific to the area. Strangely, chlorine in pools does bring back memories of going swimming at the Y with my dad when I was a kid.

14 - David W. McFadden once said that books come from books, but are there any other forms that influence your work, whether nature, music, science or visual art?
Music’s played a big role in a lot of my fiction. Some of the stories in Transitory were inspired by specific songs, and Reel opens at a punk show. And I studied film in college, so that’s also played a part in how I relate to storytelling. (Sometimes to a fault.)

15 - What other writers or writings are important for your work, or simply your life outside of your work?
So, so many. There are a host of writers who have been influential for my work–Javier Marias, Kelly Link, Warren Ellis, William Gibson, and Ralph Ellison all come to mind. But it’s also great to feel like a part of a literary community here: my friend Jason Diamond, who founded Vol.1 Brooklyn, has a memoir out later this year, and there a host of friends and writers who live nearby (Sean H. Doyle, Dolan Morgan, Natalie Eilbert, Michele Filgate, Michael J. Seidlinger, Lincoln Michel, Kyle Lucia Wu, Brian Joseph Davis, Emily Schultz, D. Foy) or further afield (Gabino Iglesias, Mairead Case, J. David Osborne, Rios de la Luz, Duncan B. Barlow, Rahawa Haile, Luke B.Goebel) who I’ve gotten to know over the years.

16 - What would you like to do that you haven't yet done?
More longform nonfiction; more essays.

17 - If you could pick any other occupation to attempt, what would it be? Or, alternately, what do you think you would have ended up doing had you not been a writer?
I’ve worked a whole lot of office jobs over the years, but I was always doing something creative at the same time. It’s hard to imagine myself without the urge to make….something.

18 - What made you write, as opposed to doing something else?
I don’t think I could go through life without creating things. I studied film in college, and I think, to some extent, I still approach storytelling from that angle–but it means that I have an unlimited budget and don’t have to worry about a torrential downpour washing the set away.

19 - What was the last great book you read? What was the last great film?
I recently finished reading Robert Macfarlane’s Landmarks, which evocatively described both landscapes and the way in which we talk about landscapes, which is no small feat. (And it also left me with about a half-dozen books that I need to read.) As films go–a theater near my apartment recently screened Steven Soderbergh’s Haywire. It was my third time seeing it, and this time around, the elegance with which it was made really clicked for me.

20 - What are you currently working on?
I’m working on revising a novel, tentatively titled An Apolitical Song, which focuses on a trio of friends coming of age in the 1990s hardcore scene. I’m trying to write more essays as well: it’s a form that I’d like to be more confident in writing.