Think of the thing that dislocates your ear,
then imagine how the ear is recovered. The blast

and cure, what detonates and mends; and then,
how to restring the instrument. Here the gondoliers

have no need for us; they sing into their own canals
and navigate the city without sinking. Sound

is a form of energy that moves through air and water;
its waves of pressure collect in us. What you want

is char without fuel, sonetto, a little song to fill the jar;
you want shaken bottles and sudden explosions.

What I want is your flammable mouth, its cinematic
mottle and cue. We agree to disagree. Gondolier,

navigate the city without poles. Let the little song
and its echo fly through your unfastened ear. 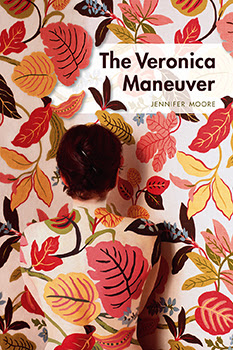 I’m charmed by the narrative lyrics that make up Ohio poet Jennifer Moore’s first full-length poetry collection, The Veronica Maneuver (Akron OH: The University of Akron Press, 2015), a book that follows her poetry chapbook, What the Spigot Said (Salt Lake City UT: High5 Press, 2009). Set in two sections of shorter poems on either side of the eleven page poem-section “The Quiet Game,” the pieces in Moore’s The Veronica Maneuver are sharp, and even striking, in parts. The variety of her structure and line-breaks becomes interesting, from the pauses generated through an accumulation of short lines to her prose poems, packing in as much as possible in small spaces. As she writes in her title poem:

If I were a bull, I’d have to decide between focusing on a target and charging everything that moves. Either way, I’d get hooked behind the shoulder and brought to my knees in front of everybody. What the spectators want is the estocada, the death blow and difficult exit. So banderilleros toss darts into the bull’s back; then flowers for the matador, while the body’s dragged from the ring. You wear a muleta as a little retro jacket; we pour one out for the bull.

Occasionally there are places in which I wish her poems were tighter, but the wit and will of such a first collection, I’d suggest, allows for the occasional moment. Either way, I am curious to see what she might do next.