Regret is a gift
that keeps on giving I
think it was Sontag
or Sonic the Hedgehog
who said just dash dodge
weave faster than you
can think n there’s no
time to shame spiral
Crushing
on Muse—whose
even slight squint bursts
me into high July—
while dialing,
essentially, a trick.
This is my argument:
Muse crashes into
the edges of my nights,
isn’t crushing,
doesn’t love me,
doesn’t have his shit
together (tho neither,
frankly, do I) but yanks
me n my hand onto the dance
floor til tilt-a-whirl Goes on
like land, just accum-
ulating in my eyes. 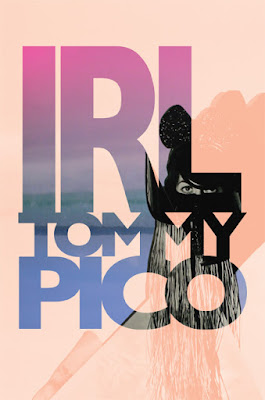 “[A] sweaty, summertime poem composed like a long text message” is how the back cover describes Brooklyn, New York poet and editor Tommy Pico’s first full-length poetry title, IRL (Birds, LLC, 2016). There is something very clear in the text as to why Pico was named by Flavorwire as one of their “50 Writers You Need to See Read Live,” a kind of breathless, insistent energy and rush, demanding every bit of your attention. Composed closer to the staccato-shorthand of text messaging than the lyric, Pico’s IRL is lively, pulsing and sassy, writing out a long poem that speaks of history and language, pop culture idols and icons, and a heritage that includes his rhetorical declaration, spawned from, it would seem, his background as a member of the Kumeyaay nation: “I survive seven generations / into a post-apocalyptic America / that started 1492. Maybe / you’ll live too?” Pico’s book-length poem reads as incredible immediate, seemingly composed via texts from his (ie: the narrator’s) shared apartment, writing out everything and anything, a busy chatter quickly turning from the seemingly mundane to an almost divine clarity and back in a blink, writing: “America / reclines undying I want America / to know who is still dying / for its sins. I want America taken / alive w/ all my names. I have cocks / in my eyes and songs / in my stars and so Yeah, / I fucking hate you / for wanting to die. / And hate myself  for thinking / it might be for the best.” This is a rich and confident text by a poet worth paying attention to; his writing demands it.

Boundaries
aren’t cages. Meter
is a fine flute.
But maybe nobody wants
to hear you. Maybe
you are just an asshole.