breaking what it needs,
digestion, the nourishment process

could be a good model

so on doors I pluck for sound, and out
of varying instruments 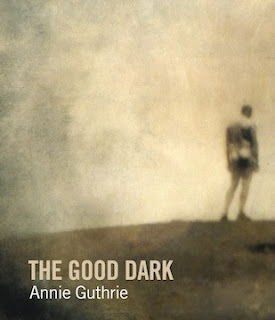 In the “Foreword” to Tucson, Arizona poet Anne Guthrie’s new poetry title, The Good Dark (North Adams MA: Tupelo Press, 2015), poet and critic Dan Beachy-Quick writes that the book “[…] offers itself as a curious testament to the labyrinthine complexity of human relation to the world and those others that fill it. For in the poems there are powers, there are forces, there are laws, but none of them exert an authority that removes the poet from her need to write so as to listen: ‘sometimes it admits you its existence.’ That existence is manifold. There is nature, and there is God, and there is the gossip between them that the human ear eavesdrops upon; there is also the human, relations of body to body, and convolutions of heart to mind and mind to heart that understand love’s reciprocity is a confounded, confounding form.” A bit further, his introduction ends:

Guthrie writes a last line that doesn’t illuminate all those that came before. Better, it holds within the various darknesses in which this book does its utmost work. “It was this kind of human,” she says; and reader, I hear it thus: kind as type, and kind as adjective. This kind of human, this poet kind, gives us this kind book in which the difficulty we fear to admit that we are our own living example of will be tender to us even as we tend toward it, word by word, line by line, poem by poem, letting our vision adjust to the good dark.

Composed in four lyric sections – “unwitting,” “chorus,” “body” and “epilogue” – Guthrie’s The Good Dark is constructed out of a sequence of short, stand-alone fragments, similar in tone with a content shifting around the lyric “I” and a conversation around the divine, from the natural to the deeply personal; of “dusk, grasses wind the hymn” and “like a river stepped in by mistake” to “sometimes shadows become articulate[.]” Her poems move from the clipped fragment to the stanza, writing out an intimate space of self, the body, memory and the spirit, yet there are places where I wish her lines were just a bit tighter than they are. Otherwise, the flow here is lovely, even if her lyric is occasionally unclear.

When she was a girl she was an inventor.
Lies would fly out of her mouth, bright world, bright wings.
At first the children would flock to her like a colorful mother.
But then the room took on the other hue,
and feeling the feel of too-heavy wings, the too-heavy bird
fluttered and tottered and fell.