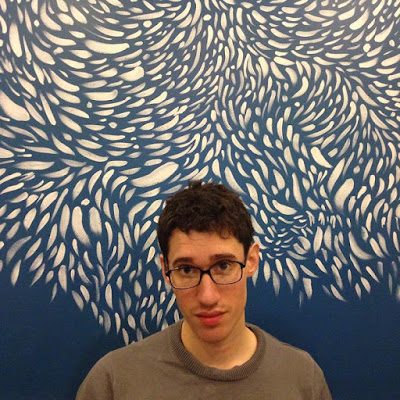 Roberto Montes is the author of I DON'T KNOW DO YOU, named one of the Best Books of 2014 by NPR and a finalist for the 2014 Thom Gunn Award for Gay Poetry from The Publishing Triangle. His poetry has appeared in The Volta, Guernica, The Literary Review, Whiskey Island, and elsewhere. A new chapbook, GRIEVANCES, is forthcoming from the Atlas Review TAR chapbook series.

How did your first book change your life? How does your most recent work compare to your previous? How does it feel different?
Publishing has so little to do with poetry it is important to undergo it every once in a while. I don’t mean this to sound negative; it was mostly a positive experience for me. But there is so much push and clamor for publication in the culture of MFA’s and fellowships that we never have any time to discuss what it actually means. Both for the work and for the poet. What do you gain and what do you lose? The most concrete thing I gained was the muted respect of my psychiatrist after my book showed up on the NPR end of the year list. A person stands to lose a lot if they allow that kind of valuation to swallow them. I’ve seen poets win an award or get a publication and then begin chasing that same kind of success by reproducing the works that got them there. Some people call this ‘finding your voice’ but, in my opinion, the voice you find in those situations is rarely your own.

How did you come to poetry first, as opposed to, say, fiction or non-fiction?
By accident! I took an introductory poetry workshop in undergrad taught by the amazing poet Rebecca Morgan Frank. My original concentration was fiction but after that class I switched to poetry. It helped that my fiction was terrible.

How long does it take to start any particular writing project? Does your writing initially come quickly, or is it a slow process? Do first drafts appear looking close to their final shape, or does your work come out of copious notes?
You’ve hit a sore spot. For the first book all my poems came in short bursts nearly fully-formed. Over time I began to write longer, sprawling pieces that drag on for days. I tend to edit as I write so it’s sort of a back-and-forth as the lines go on. It is like a colony of ants building a bridge with their bodies. I oftentimes have no idea where a poem is going until I hit the other shore. And then, just like that, it’s over.

Where does a poem usually begin for you? Are you an author of short pieces that end up combining into a larger project, or are you working on a "book" from the very beginning?
In the past I’ve stumbled upon engines more so than single poems. For example, I became infatuated with spam for a period of time—the way they so expertly prey on our insecurities and clotted hopes—and that led to 30 or so poems. In the first book I happened upon the phrase “One way to be a person is” and that led to a few poems. I’m in an awkward in-between, really. I write series that are too short to be books but too numerous to be one-offs.

Are public readings part of or counter to your creative process? Are you the sort of writer who enjoys doing readings?
I am a ham so I love reading. I do admit, however, that when I read I view myself as first and foremost a performer of sorts. It’s not that I think “serious” poetry can’t be shared in a public space but when I always choose poems to read that I think are engaging and can be performed. It is strange because I have a few poems that I genuinely like but will never read because I don’t think they’re suitable to that environment. The written word plays with a different affective space than something spoken. I think both are interesting and have their merits. But they should not be confused.

Do you have any theoretical concerns behind your writing? What kinds of questions are you trying to answer with your work? What do you even think the current questions are?
I do not think poetry can answer anything. Not to be gooey, but, I think poetry operates in purely in an interrogative affective space. I try not to engage in theoretical concerns because I believe that can lead to a strangling of that space in a way that helps no one. The closest thing that I have to a theoretical concern is the belief that good poetry exists in such a way that it saps power from the powerful and gives power to the powerless.

What do you see the current role of the writer being in larger culture? Does s/he even have one? What do you think the role of the writer should be?
The writer should write. I privilege poetry over the poet so I don’t concern myself so much with how an individual should act or what role they should occupy. As a rule, though, whatever role a poet feels they should have in the world is probably the wrong one and I encourage them to avoid it at all costs.

Do you find the process of working with an outside editor difficult or essential (or both)?
A good editor is invaluable. The further from you they are aesthetically the better. When you are reduced to pleading “but that’s not what I was going for” it really forces you to view the work in a manner you wouldn’t have if your editor just ‘got it’. Sometimes I think I use aesthetics as an excuse for laziness or to enter the poem and ham it up. Someone who doesn’t share your inclinations can bend your poems in really interesting and necessary ways.

What is the best piece of advice you've heard (not necessarily given to you directly)?
“Another poet’s success does not take from your own. So fuck it.” (paraphrasing)

What kind of writing routine do you tend to keep, or do you even have one? How does a typical day (for you) begin?
I write in-transit, mostly. I used to have an hour train ride to and from work every day that I dedicated to writing and editing. It was amazing! I recently moved, however, and my commute is much shorter so I’m having difficulty writing as much as I used to. Writing is such a superstitious act it is so strenuous when you are forced to change your rituals!

When your writing gets stalled, where do you turn or return for (for lack of a better word) inspiration?
Fear.

What fragrance reminds you of home?
There’s a particular dish my grandmother would make: picadillo. My partner and I are vegetarian so when we make it we use veggie ground beef but, somehow, the smell of the spices still rings true.

David W. McFadden once said that books come from books, but are there any other forms that influence your work, whether nature, music, science or visual art?
I have a great interest in the lives of mathematicians. I feel a strong connection with those who work for years to discover the mechanics of reality using only inscrutable symbols.

What other writers or writings are important for your work, or simply your life outside of your work?
A few poets who invigorate and inspire me: Jenny Zhang, Natalie Eilbert, Wendy Xu, Sara Woods, Joshua Jennifer Espinoza, Eduardo Corral, Carrie Lorig, & Rigoberto Gonzalez.

What would you like to do that you haven't yet done?
Realize myself in such a way that, when I’m done, I can simply unlace my body of existence.

If you could pick any other occupation to attempt, what would it be? Or, alternately, what do you think you would have ended up doing had you not been a writer?
I have no idea. From a very early age writing was something that I bent toward. I cannot imagine an existence other than the one I have. Sometimes I imagine what it might be like for people who don’t have poetry but then I freak the hell out and am forced to imagine something else.

What made you write, as opposed to doing something else?
^ ^ I never had a choice.

What are you currently working on?
I am working on a full-length manuscript and editing a chapbook, Grievances.