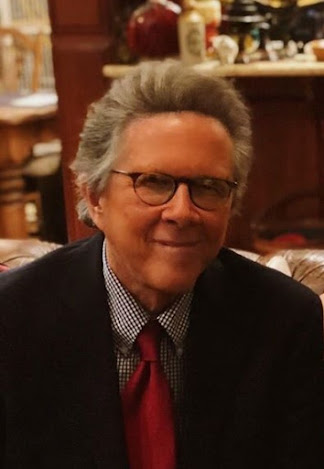 Glen Weissenberger, a Harvard Law School graduate, has distinguished himself as a trial lawyer, a law professor, a legal scholar and a law school dean. After four decades in the legal profession, Weissenberger began a second career devoted to writing short stories and novels. His stories have appeared in the SLAB Journal, the Broadkill Review, Bluntly Magazine, The Prospectius Journal and the Boston University Law Review. His novels include Made to Measure Man and Companions by Contract. Weissenberger’s legal books and articles are consulted and cited extensively by judges and lawyers throughout the United States. His latest publication is a novel, The Dark Secrets of Barth and Williams College, A Comedy in Two Semesters (atmosphere press, 2020).

My first book was radically different than my current novel, The Dark Secrets of Barth and Williams College. Written in 1980, my first publication was a treatise on the newly enacted rules of evidence for Ohio courts. Over the years that book has been revised in annual editions, and it has become a legal classic.  Frankly, the book demonstrated to me that the law book market represents a continuous source of royalties for legal authors who can write clearly and meet a deadline. I am the author several legal books which are revised every year in new editions.

In my career as a trial lawyer, law professor and dean, I have written volumes of articles and treatises on legal subjects. I have always enjoyed writing, even if the subject is rather dry. For me, the challenge of nonfiction is to make the writing engaging and exquisitely clear. I always anticipated, however, that when I retired from the legal profession, I would also write fiction, and not surprisingly, my first two novels were about lawyers. My current novel also draws upon my experience as a professor and involves the absurdities of academic politics.

Anything I write, I formulate first in my head. As I am engaging in random acts of life, like reading, cooking, and exercising, my mind visualizes the content and structure of what I will ultimately put on paper. I never use notes. Consequently, when I write, the process is rapid and fluid. In fact, I generally use dictation software because I'm a pathetically slow typist. The first drafts, however, always require a great deal of polishing, and several revisions are a substantial part of the process.

My better short stories start with a complex emotion that I feel but do not fully understand. I write the story as a way of giving context to the emotion. The inspiration for my novels is not entirely different, but for a novel, I engage a parallel process of creating an imaginative plot. When I wrote Dark Secrets, I was in a particularly whimsical mood, and I totally enjoyed writing it. The story employs broad, absurdist comedy. Despite its title, it is hardly a dark novel.

My publisher would like to arrange readings, but obviously, the pandemic has made this difficult. I expect that this novel will have a second launch after society returns to a semblance of normalcy. Nevertheless, I wanted to make Dark Secrets available now when it may have the effect of functioning as an entertaining escape.

Even when I was much younger, I considered that the most valuable commodity we have is time. I am not happy unless I am using my time meaningfully. In the same way, I hope that members of my reading audience will consider reading my work to be a rewarding use of their time. In my opinion, the greatest questions in this world are not universal. Rather, they are personal and individual. How a person sorts out these matters is up to him or her. If a book I write represents a good use of time for the reader, regardless of whether the book helps the reader discover something new or is simply entertaining, I am satisfied.

In my lifetime, I have written for several diverse audiences, and it is impossible to identify a singular purpose of communication in the written form. Even if we focus just on novels, the role of the author varies greatly. Some poorly written novels have become very popular simply because they provide an escape or entertainment, and I think there is nothing wrong with fiction in this category. Very few novels change a reader's life in any significant way. In fact, there is research that shows that a substantial percentage of novels that are begun by a reader are never finished. I think a successful novel is one that at least sufficiently holds the interest of the reader to finish it.

I have always found that working with an editor is not only helpful, but enjoyable. Perhaps I've been lucky that I've only encountered reasonable editors.

10 - How easy has it been for you to move between genres (non-fiction to fiction)? What do you see as the appeal?

I have had no great difficulty shifting between writing nonfiction for lawyers and writing fiction. Common to both is the challenge of keeping the reader with you. While it is obvious that legal writing should be clear, I also think that fiction authors should make an effort to keep the reader from becoming lost, confused and abandoned. For the most part, I think that while a plot may be puzzling and twisted, the actual prose should not be.

Whatever project I'm working on, I almost always write in the afternoon. When I'm writing, I don't like the overhang of other tasks that must be completed in the day. Consequently, things like exercising, reading mail and other matters of daily life, I complete in the morning. While I often write into the early evening, I never write after dinner, which in our house tends to be as late as 8:30 or 9:00.

I almost never get stalled because I already have in my head what I want to write on a particular day.

I have been influenced by Saul Bellow, Philip Roth, John Irving and Michael Chabon. I am also benefited by a lifetime of watching people do extremely foolish things.

I would like to have a feature role as an actor in a Hollywood film.

I have been extremely lucky to have had a career which has allowed me to assume diverse professional roles. Writing has been integral to all of them.

Even since I was very young, I naturally enjoyed writing. Writing nonfiction became a necessary part of my career as a law professor. Writing fiction is actually harder, but it is more enjoyable. Some things are just part of who you are.

Most of the "great books" I read as part of my formal education, but in the last five years, I have read one truly great book: A Gentleman in Moscow, by Amor Towles. While it was well received, I don't think it garnered the accolades that it deserved. I consider The Phantom Thread (2017) to be a great film. While I think it is difficult to make a great comedic film like Some Like it Hot (1952), I consider Wes Anderson’s Grand Budapest Hotel (1914) the best recent comedy.

Trying to spend more time with my family.

Posted by rob mclennan at 8:31 AM
Labels: 12 or 20 questions, Atmosphere Press, Glen Weissenberger