She eats as though she was starving. Hair
in place. her mother associated all that was
ugly with what was hateful. She hated her
stomach (which “She” do you mean?). She sat
in the corner where we put her, facing a wall.
Your friendship was her sorrow. Pain went
both ways. The stolen, stolen was the measure
of grief. Her house was bombed in half. Had
to run. Had to run. Had to run. In half a
person cannot be. Nor fully be. No fill.
She asked if she could eat more. (Again
which “She” do you mean? Make yourself
clear.) She said yes—sausages, eggs, toast.
Disgust. The Rise was reflected in all these
eyes that stared. Took sides for survival.
The glass is empty and being filled was
never understood. SATIATED. The woman
dressed in tattoos said that word, said there
was nothing like it. She held the girl in her arms.
you can’t white that out. (“Wale; or The Corse”) 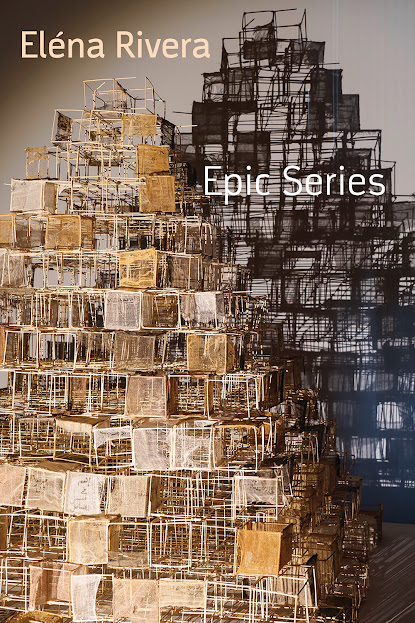 I’m intrigued to see Eléna Rivera’s latest, the full-length Epic Series (Shearsman Books, 2020), a collection built out of three sections—“Wale; or The Corse,” “Unknowne Land” and “The Wait: for Homer’s Penelope.” I first encountered Rivera and her work through picking up a second-hand copy of her chapbook Wale; or The Corse (Buffalo NY: Leave Books, 1994) at Montreal’s The Word Bookstore somewhere in the 1990s. As the poem writes: “There is no access when the destruction / is so great.” Upon first encountering the work, I ascribed it as connecting, even unintentionally, with the language writing I was aware of through the Kootenay School of Writing, at that time only peripherally aware of anything that might have been happening in Buffalo, or any other non-Canadian space. Born in Mexico City and raised in Paris, Rivera is the author of numerous poetry titles including Scaffolding (Princeton University Press, 2017) [see my review of such here] and The Perforated Map (Shearsman Books, 2011), as well as numerous works in translation (including two above/ground press translations of work by Sandra Moussempès).

Rivera composes three extended suites of poems utilizing words, and language itself, as the building blocks for something greater than itself. Epic Series is a book of unfolding, and accumulated dismantling, structured as a triptych, each section of which appeared previously as self-contained small press publications. The second section of Epic Series, “Unknowne Land,” for example, won the Frances Jaffer Book Award and appeared with Berkeley, California publisher Kelsey Street Press in the spring of 2000, and “The Wait: for Homer’s Penelope,” appeared as a chapbook through Mill Valley, California’s Em Press in 1993. Given the nature of composition and publication, stretched out across years, the three pieces fit together remarkably well, and it is curious to wonder if the pieces were always intended to connect, or if the connections between them only revealed themselves from such a distance of years, or even through the possibility of joining together for this collection. As a whole, Epic Series is certainly epic, a series and sequence covering a vast distance and across a broad canvas. “A landscape can be viewed from any window,” she writes, as part of the second section. Rivera writes her epic through an array of formal considerations, from dense lyric to stretched-out fragments to the prose poem. The notion of the “epic” is even punctuated through her third and final section, writing out “Homer’s Penelope,” providing a voice to the figure of Odysseus’ wife, Penelope, traditionally associated with marital fidelity. “Memory can be disputed,” Rivera writes, as part of Penelope’s poem, “bears a distaff. / Marks made in a desperate attempt to find my own.”

How could I ever get past this point? a hammer oscillates.
They were not “wise” so were strung up on photographs?

I could not separate myself from them. My own murder.
The back and forth motion made me nauseous.

I cannot stand apart from my own kind.
I too open like a ring to bleed.

It becomes clear fairly quickly, through looking not only at this current collection, but throughout Rivera’s published work-to-date, that she is a poet very much engaged with form, and experimentations in and through form, from the classical to the experimental. Given what her writing has accomplished, I’m curious as to why her work isn’t better known than it is; it makes me wonder if the wealth of her work as a translator overshadows her own writing, which would be something quite frustrating, indeed. Both her own writing and her translation exist as two elements of an ongoing engagement and study on form and language. In her piece “The Perforated Map, and Writing the Unknown,” an essay that explores where her considerations of geography, language, culture and form meet, and prompt some of her structural explorations, she writes:

"The body is a field," Robert Creeley wrote. The body is a map. "In America space haunts, not architecture," I wrote in Fugitive. And so I approach what haunts me : Books like Susan Howe's Europe of Trusts, Leslie Scalapino's Way, Inge Christensen’s Alphabet and Michael Palmer's Sun ; Theresa Hak Kyung Cha's Dictée written in multiple languages, calling on all nine of the muses for a fluid interplay of literature, identity, history, film and biography haunts me : poets like Marina Tsvetaeva, Paul Celan, George Oppen, Lorine Niedecker and Arthur Rimbaud haunt me ; Emily Dickinson and H.D. haunt me ; Bishop’s “Crusoe in England”, Virginia Woolf, and many others left unaccounted for, haunt me.