The Saddest Thing Is That I Have Had To Use Words: A Madeline Gins Reader, ed. Lucy Ives

What remains lacking is a full consideration of Madeline Gins as a writer—as a poet and novelist who began, in the earliest days of popular computing in the United States, thinking through writing in a radical sense, as a process-based technology, in and of itself. It is my hope that this collection will open up a broader discussion around Gin’s work, as well as the recent history of interdisciplinary practice more generally, particularly in its relation to the novel, poetry, and possible gradients between the two. I mean this in scholar Thomas Beebee’s sense, i.e, that “genre is also a site of … noise, the cusp between different use-values of texts and between discursive entity  and non-entity,” as well as in Lyn Hejinian’s sense of literary strategies that “bristl[e] with perceptibility. As a high school and college student, I was constantly told that novels were very important, while poetry was irrelevant to contemporary culture; that while poetry was pretty and all, it was “dead,” “I, too, dislike it,” and so on. yet, what I have come to see is that the location and value of poetry was too poorly understood in these curricula: Poetry may be writing, of course, but it is not necessarily that; it is also image, performance, gesture, sung, social life, gossip, furniture, food, shelter, dance, research, email, garments. This is not to say that poetry has no determined or identifiable form, but that it suffers when it is confined to a stanza. It may well need all the room of a novel, if not the room of an actual room. Madeline Gins is the one who taught me that. (“EVERYTHING I RECEIVE WILL BECOME PART OF A NOVEL: An Introduction to the Work of Madeline Gins,” by Lucy Ives) 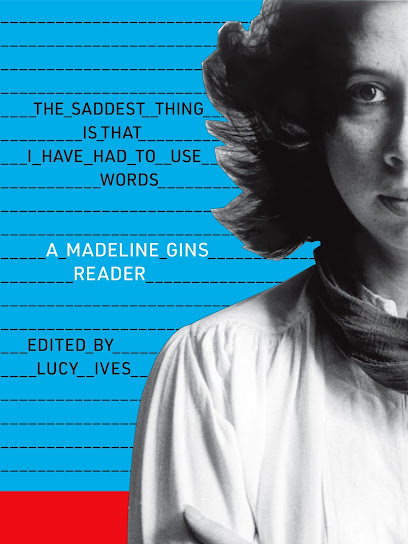 Thanks to the publication of The Saddest Thing Is That I Have Had To Use Words: A Madeline Gins Reader (Catskill NY: Siglio, 2020), edited by American poet and fiction writer Lucy Ives, I’ve been introduced to the work of the late Madeline Gins (1941-2014), a writer living and producing work in New York City during a particularly lively shift of visual art moving from galleries into more conceptual realms. Married to the artist Shüsaku Arakawa, with whom, as Ives writes as part of her lengthy critical introduction, “she is perhaps best known, as of the writing of this introduction, for her work with Arakawa on the Reversible Destiny architectural project, via which they designed and oversaw the realization of structures they believed had the capacity to stave off death, including lofts in Tokyo, a park in Yoro, Japan, and a house in East Hampton.” Gins existed as a writer attuned to the visual arts during a period when conceptual approaches were moving the realm of visual arts from gallery spaces into what lay beyond those perceived limitations. I’ve argued in the past that I believe Christian Bök to be a conceptual artist, but one who utilizes the realm of “poetry” as his compositional structure, and Gins appears to have done similarly, a good half-century prior. During the early years of her production, working as a conceptual artist was confusing enough for the culture, but being a writer attached to visual artists utilizing the same was even moreso. Ives lengthy introduction offers incredible insight into Gins’ extensive solo and collaborative work, and the collection includes not only writing but complete facsimile reproductions of her published books, providing an acknowledgement to an important American mid-century artist. Unlike Frank O’Hara in the 1950s and 60s, who was writing poems in representation as ekphrasis for portraits of fruit baskets, Gins was working on far larger and more complex structures, such as her 1969 book WORD RAIN (or A Discursive Introduction to the Intimate Philosophical Investigations of G,R,E,T,A, G,A,R,B,O, It Says) (New York NY: Grossman Publishers, 1969), that opens:

I induce a sly birth with my eyes the lines of creases. (Delete) I massage geometry with a scented oil. The maintenance of lips. The battles of containers. I speak in the midst of a sifted reticence. Over there in the center, I am imploded as the size of a fly. Words fall off the curls of nothing after I have left for the next moment.
I am folded into her. I am involved in the curves of her grey folds. I know how to use them. I know better now than at first but I knew then too. She moves as I shift. Words rain on a molded juncture which you might mistakenly call my head.
I fill her up at the typewriter. I move her femininely as befits her body. I take her with me. I introduce the tensile subject into her. I am her introduction to the room, to the word rain, to the waterfall pummeling down over membranous rocks. I find her room. I move in the damp ocean. Words cannot say how I am she.
I am not afraid to move. I am the judge. It is raining in the ocean. I am a river of hypotheses, categories and disjunctive relations. I pulled Aristotle taught. I wave them and words rumble out. They eddy into sentence with my meaning. Read this with me, read that with me, read me with me, read objects (tables,toes,toads,tails,tins,trains,type,tears,throat) read write read right. This is still life. Only I write and read. If you’ve misplaced me on your own, bring me up again from off this page.