The Eyes Have Woods

You grew       hairy with conflict
through the evergreens

You wore a cape        inexplicably
in the warm evening

The woods resinous       with amber terpenes
& something starchy-sweet like gourd

You forgot everything else
thorny, dark as pitch, pulsing

with the (MEWLING) of the mammal
snared in the lops 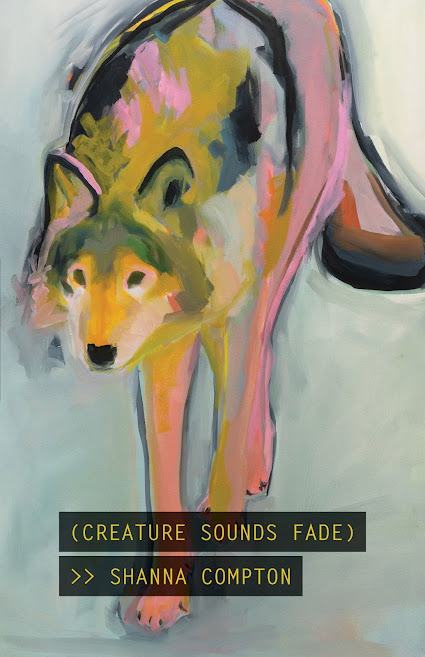 The latest title from Lambertville, New Jersey poet, artist and book designer Shanna Compton is (Creature Sounds Fade) (Black Lawrence Press, 2020), a collection of poems predominantly built of single-page lyric narrative sketch-works, as multiple of her poems give the simultaneous impression of quick thought and deep consideration. Her poems move across the page at quite a speed, from a human interior to an exterior and engagement with landscape and eco-concerns, enough that the two seeming-poles become nearly indistinguishable. “The picked edges of the birches’ / bitter bark,” she writes, to open the poem “Paper Trees,” “Red-gold admixture / of mind      a fleeting logical thread / she keeps tangling around / her spindle body [.]” Compton plays with familiar landscapes and phrases fragmented and re-formed, twisting expectations and direction, constantly darting between lines, between trees, in an out of view in simultaneous outreach and retreat. Compton writes through a voice akin to something wild, something feral, one hesitant to step to far towards an encroaching array of human activity. “My love I am a tangled I am choked & salted,” she writes, to open “Shorn Fur,” “My love I am feeling the itch of the buds soon to burst from my skin [.]”

This is Compton’s fourth full-length poetry title, after Down Spooky (Open Book Award Winner, Winnow, 2005), For Girls Other Poems (Bloof, 2008) and Brink (Bloof, 2013). (Creature Sounds Fade) is composed in three sections of shorter poems as well as a third section, “(INDISTINCT CLAMORING),” a section made out of a single, slightly longer poem, “White Chrysanthemums.” At five and a half pages, “White Chrysanthemums” sits at the conceptual centre of the collection. This is the poem around which the entire collection holds, and hangs together, anchoring the body of the book, the accumulated body of the poems included here. As she writes: “I cast my eyes around, / recalling yesterday, floating descriptions.” Later on, she offers: “Earlier I was reading back over the unfinished poems / collected in a folder, mostly half-starts and interrupted / sessions and noticed that I am somewhere stuck / on the yellow blazing of forsythia, letting it in every April / and every next April forgetting I’ve already said / whatever there is to say about the almost violent way it slashes / into the gray tail end of winter.” There are hints and elements of the entirety of the collection in this poem, as the book as a whole ripples out from this lone, single poem.

This is such a stunning, solid collection of poems. To paraphrase Don McKay: poems any bird would trust to land upon. There is an incredible physicality to the poems in this collection, both of landscape and the body; a physicality she references as part of an interview conducted by Tom Beckett for his E-X-C-H-A-N-G-E-V-A-L-U-E-S blog, posted February 23, 2006. As part of her response to his query on inspiration and direct response, she writes:

Landscape, or maybe place is a better word. The way you feel surrounded by certain scenery—except it’s more than physical location or just props. When I was kid, going out into a pasture or out into the woods on the “deer lease” (Texan for a piece of property leased for hunting) or taking a walk around the neighborhood, I was fascinated by the way each place affected me. In the house shut up in my room vs. out in the living room. In the yard or up in a tree in the yard. In different aisles of a grocery store. New places excite me or sometimes unnerve me until I become used to them. I’ve had to practice some behavioral therapy to get over some of the less pleasant effects of this sensitivity. But I love to travel, and I think these sensations of place are what I try to capture in the photographs I take when I’m traveling, too.