and watched the rangers chase away the elk,
Her limbs virgules as she fled on the diagonal.

We’ve been waiting for the birch to bloom.
after vodka in two different bars,

you lead me off the path.
My glasses fog with your breath, our mouths

like the eggs of songbirds, radiant—
the holiday displaced into mid-spring. 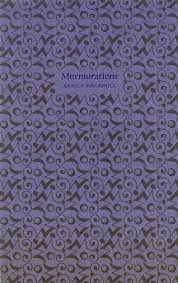 I’m intrigued by the intimacy of indirect speech Halifax poet Annick MacAskill explores in Murmurations (Wolfville NS: Gaspereau Press, 2020), a second full-length collection after her debut, No Meeting Without Body (Gaspereau Press, 2018) [see my review of such here]. Murmurations is a collection of first-person narrative lyrics composed as love poems, writing short bursts of description and narration that run slant; as a way to speak to something else, something other. “I say / friend—though more than oil painting / or sculpture,” she writes, to close the poem “BANFF,” “I’d like to know / the weight of you, hold it / between my teeth or under / my tongue, a secret / like the white ermine in the snow.” Constructed as five sections of short lyrics after an opening poem—“[…] the gopher on her hind paws / watches the tentative dance / of our walking. // I swear / everyone looks in love these days— // we angle our ambitions / like the sideways flight of the crow, / bur frantic.” (“WATER HUNGER”)—the poems in Mumurations are sly, underlined by a subtle physicality and sensual purpose. The poems are fueled by tone, texture and language, utilizing narrative structure as a means to an end, as opposed to an end unto itself. As part of a recent interview around the collection conducted by Alli Vail as part of the Victoria Festival of Authors website:

AV: This collection explores changing relationships, but it also delves into physical seasons: “February is a cold tongue, slick —” and “Snow through the first days of April — my boots / reveal the bloodied pinks of early cherries” or “August / and autumn already here in the trees.” Do you find it easier to focus on writing poetry in certain seasons, or do you follow a strict, year round writing schedule?

AM: It’s not new to structure a book of love poetry around/over a year—Spenser did it, Carol Ann Duffy did it, Marilyn Hacker did it, and while Petrarch’s Canzoniere took many years to write, it contains 366 poems—one for every day of a standard calendar year, with a bonus piece. Writing the poems in Murmurations over the course of twelve months (November to November) was a way to interact with this tradition. Perhaps because of this structure, no one season proved easier than the others, or more inspiring.

As for my writing schedule, it’s far from strict, though when I get started on a project I like, I do try to keep working on it in a continuous way, even if that’s just in the back of my mind.

The evolution of MacAskill’s work has allowed her lines the lightest touch; poems (to paraphrase Don McKay) any bird would trust to land upon.