“To read what is hidden” the conversation
begins with that, the silence, the cloaked waiting
It must be paid attention to no matter
what—it demands to be first as is its right,
and too much accretion woven around it
will hide instinct’s way if ego’s unwilling
to bond with, to taste the dialogue’s intense
distance—that entering of mind’s divisions,
bringing one tongue forward reading the other’s
silence without unraveling completely,
having a sense of direction a desire
to meet the poem’s density where thickness
clings to a cloaked rendering that doesn’t end
but meets with isolated words: tuff, gorse, edge 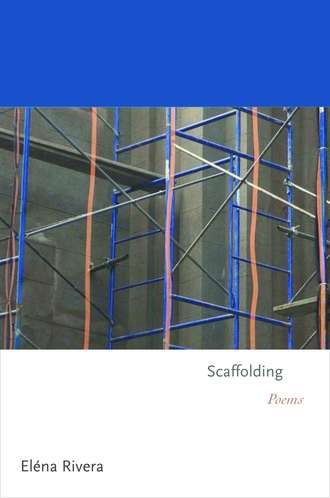 Somewhere during the later 1990s, I picked up a second-hand copy of poet and translator Eléna Rivera’s small title Wale; or The Corse (Buffalo NY: Leave Books, 1994) at Montreal’s The Word Bookstore and was immediately struck by the flow of her lyric, and the structure of the book-length poem, and spent years curious about how what she might end up doing next. Given that, I’m very pleased to finally be able to get into her most recent title, Scaffolding (Princeton NJ: Princeton University Press, 2017), a collection of eighty-two sonnets composed as a kind of “day book” project over the space of nearly a year (the dates run from mid-July through to the end of the following April). Composed around the sights, sounds, buildings and figures, both contemporary and historical, of New York City, where Rivera now lives, Scaffolding is well-named, with a collection of sonnets entirely centred around structure. As part of an interview around the book published on the Princeton University Press blog soon after the book appeared, she spoke on the combination of title and her use of the sonnet: “The sonnet form is a kind of ‘scaffolding,’ a structure, for the substance and sounds of the poem, as is the hendecasyllable line. I also like the darker meaning of the word, ‘an elevated platform on which a criminal is executed;’ there was something that felt dangerous about these poems, about what I was doing.” Earlier in the same interview, she wrote:

I’ve always been interested in form, the interplay between form and content, between the inner and the outer. I wanted to experience what it would be like to write discreet poems over time. I had been engaged with writing long poems for a while. I’d work on a piece, playing with different possibilities, until the form would come to me and I knew then that the poem had found its direction (the amount of time I have, and the concerns of the poem, are what dictate the poem’s length). I was interested in the book as form (a love of the epic) and made one-of-a-kind books, and books in hand-letterpress editions (fascinated by the weight of the single lead letter). At first the sonnet seemed the complete opposite of what I had been doing, but really it wasn’t that different, the form got smaller, tighter, and I filled it rather than found it; it shaped the conversation, the music of it. I really became fascinated by the fourteen-line form, what such a compact container could give rise to, and once I committed myself to it I felt compelled to continue.

While some have argued for the limitations of the sonnet, Ottawa poet Stephen Brockwell has argued, as others have, the sonnet’s infinite possibilities and endless mutability, which most likely suggests why the sonnet is still in such use. With the form of the sonnet and the idea of scaffolding, Rivera’s Scaffolding exists as a kind of catch-all, able to hold anything and everything, picking up multiple elements from her knowledge of New York City to compose collage-sonnets tight enough that even a bird might land upon them.

It’s madness this falling in love with sadness,
that faint sound a song that keeps resurfacing
between thoughts that Icarus carried too far
seen from the river’s edge painting by Bruegel
She’s able to swim with help from a large dog
(over and beyond tale of the falling youth)
I envy the comfort that she takes from him
(falling brusquely into a dream) bathed in a
sunlit world where “the whole pageantry” deepest
when at my desk voluntarily holding
“it” the absent, the falling, the dangerous
just balances at the edge of the tale, of
dangerous dropping places where “knights” “ladies”
plummet and cannot recover from madness—