some sense
from sound

by this splint
of attention.

Occasionally a book of poetry appears, seemingly out of nowhere, that is openly discussed between poets as a ‘must read’ well before any reviews or notices have appeared, as is the case with poet Jack Davis’ remarkable debut, Faunics (St. John’s, NL: Pedlar Press, 2017). Faunics owes a debt to Nelson Ball and Mark Truscott, both of whom are acknowledged, both as notes at the end of the collection as well as individual dedications, for their influences upon his work. Because of this, Davis’ poems aren’t merely short or short-lined, but poems that fully comprehend the lessons of what Ball and Truscott (and others, including jwcurry, Cameron Anstee, Michael e. Casteels) and others have been working on for years (it might be worth pointing out that Anstee, also, has a debut collection set to appear very soon), writing an incredibly precise lyric of sustained attention.

of replacement
a seed’s 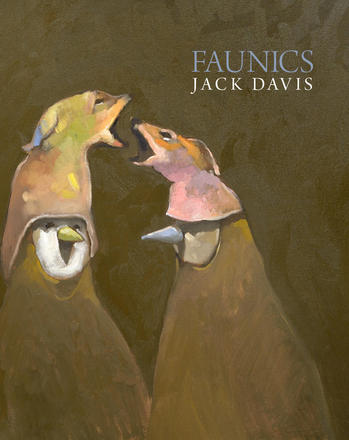 Davis engages in what has been referred to as “quietude,” an incredibly detailed attention to smallness, silence and lines as short as a single word. Nearly one hundred and forty pages thick, Davis’ Faunics is smallness multiplied and magnified, composed of short, intricate and dense lyric poems that weave their ways through language, space and multiple species of birds, animals and fauna. He writes of listening, sparrows, asides, winter and counterweights, attending to his most immediate and intimate in ways both startlingly familiar and completely refreshing. As he writes to open the poem “Curtail”: “All beautiful / of pieces // every flesh / desired // found breath / our bodies // the broken-into warmth / of animals [.]” There is such a deep and abiding respect and attentiveness in these pages, in which he attends far more to his Northern Ontario surroundings than to the facts, or even the distractions of, his own presence. As he writes to open the poem “Edible Forests and Potable Waterways of Northern Ontario”: “Music / pushed through / flax & pigment / played into / other woods [.]”

Set in four sections – “Living Daylights,” “Animal Light,” “The Pre-Linguistic Heights” and “Voir Dire” – Faunics exists as a sketchbook of poems on nature, a distant cousin to the 19th century botanical book, as done by such as Virginia Woolf and Catherine Parr Trail, but one composed out of language, a fauna of sound and meaning in the sharpest detail, and the smallest possible space. This is easily one of the finest and most understated collections I’ve read in a long time.

I'm a bit late to be thanking you, Rob, for articulating part of what makes "Faunics" the must-read book it is. I adore this book. Each time I recommend it to someone, I send them to your blog (saves me trying to explain).