Since building myself a Patreon page, I've also been posting to a password-protected patron-only blog (I've actually been posting a small mound of a longer poem-in-progress there over the past few weeks). I thought it might be worth reprinting the occasional post here, for the sake of general interest. Access to the blog comes with donations as low as $1 a month, all of which goes toward me working on all of my (mostly payment-free) writing, editing, reviewing and publishing. 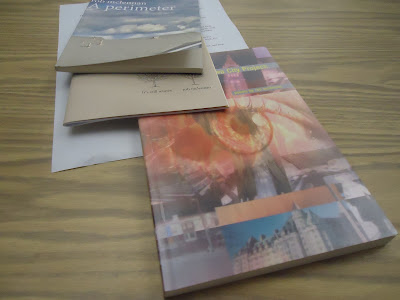 I recently did an informal classroom reading and talk, answering questions around my poetry collection The Ottawa City Project (Chaudiere Books, 2007) at the University of Ottawa, thanks to the fact that Cynthia Sugars has been teaching a class on writing on Ottawa. Apparently other titles they’re going through in the class include Monty Reid’s Garden (Chaudiere Books, 2015), Andre Alexis’ Despair and Other Stories of Ottawa (Coach House Books, 1994) and a novel by Priscila Uppal (I don’t know which one). It was fascinating to revisit a book I’d composed over a decade earlier, from reading aloud from the book to taking a field of questions, as well as listening to the students work line-by-line through a couple of pages. How does the book hold up? How does it compare to some of the Ottawa-specific work I've been exploring since, including the Alta Vista-specific A perimeter (New Star Books, 2016)? (Not that these last few bits were discussed, but they were close to my own thoughts.)

It was a bit unsettling, catching the occasional reference in The Ottawa City Project has become hopelessly outdated. The University of Ottawa building that held the large mural of Pierre Trudeau’s eyes is no longer there, for example. I speak of the Somerset foot-bridge over the canal as not yet constructed. Does this make the book temporaly fixed in a good way, or a bad way? Does the book capture a particular period or simply exist as an outdated text? Am I simply saying the same thing? Given the bulk of the class (save one) were born after the 1998 ice storm, what chance had they to catch every detail? It was cool, at least, hearing that two of the students looked up information on Paul Chartier’s doomed attempt to bomb Parliament and a sitting House of Commons in 1966. “Why did we not know about this?” they asked. They were thrilled for the discovery, and a bit baffled as to why this was something they weren’t aware of.

I completely agree. Why did they not know? And why did I only know the same information due to catching it in a Judith Fitzgerald poem?