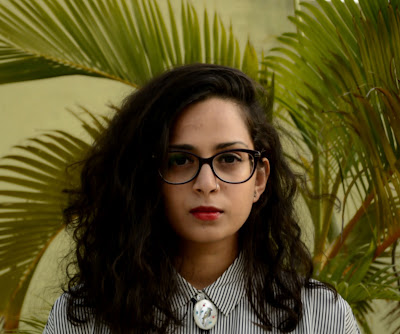 Aditi Machado is an Indian poet who lives in the United States. Her first book of poems, Some Beheadings, appeared from Nightboat Books in 2017. She is also the translator of Farid Tali’s Prosopopoeia (Action Books, 2016) and author of the chapbooks Route: Marienbad (Further Other Book Works, 2016) and The Robing of the Bride (Dzanc Books, 2013), as well as texts appearing in Western Humanities Review, Jacket2, Volt, and The Capilano Review, among other journals. She edits poetry in translation for Asymptote.

1 - How did your first book or chapbook change your life? How does your most recent work compare to your previous? How does it feel different?
My first chapbook was called The Robing of the Bride. It won The Collagist Chapbook Contest in 2012 and was published by Dzanc in 2013. At the time, the great change in my life was to have this object in the world that I had made but which was also made by others, physically. It was a gift. But now that you ask this question, I realize also that that was my first long poem—or one that got into the world somehow. I wrote the early drafts for a class called Poetry and History taught by Carl Phillips and it forced me to engage certain materials and ideas for a prolonged period of time, so that the form of the poem was also prolonged. And though I think I write differently now (less narrative, more meditation) I’m still primarily writing long poems. And they keep getting longer.

2 - How did you come to poetry first, as opposed to, say, fiction or non-fiction?
When I was a child I wrote all sorts of things. When I was sixteen I wrote a novel which I was certain would rock the very foundations of “literary fiction.” What happened actually was that I got something out of myself that was necessary to get out, so that I could look at it and realize I had no real affinity for narrative or personality. Toward the end of high school and through college I mostly wrote poems on/for the internet and realized that’s what I wanted to do.

3 - How long does it take to start any particular writing project? Does your writing initially come quickly, or is it a slow process? Do first drafts appear looking close to their final shape, or does your work come out of copious notes?
I don’t write often. I used to. But in the past two or three years I’ve slowed down considerably. Typically, I’ll write a few lines or brief stanzas almost every day for several weeks; then I’ll rewrite that material several times, with long breaks between successive drafts. But I do occasionally get certain sections “right” the first time.

4 - Where does a poem usually begin for you? Are you an author of short pieces that end up combining into a larger project, or are you working on a "book" from the very beginning?
The current manuscript I’m working on, tentatively called Emporium, I knew would be a book even as I wrote the first poem. Each poem is fairly long, because an image or line or word gets poured over, re-examined, and transformed over the course of several pages. So I suppose it begins with an image, line, or word. But words, especially. I learned some Old English and Latin recently, which makes me ever more curious about the life of certain words. I told some of my students, thereby shocking them, that I was obsessed with the word “cunt.” But it wasn’t meant to be shocking. The OED entry for “cunt” is fascinating. Among other things, in medieval times, a particular flower was called “cuntehoare” and, at another point in time, the word “quaint” was used as a variant of “cunt.” It remains to be seen whether I’ll work this into a poem …

5 - Are public readings part of or counter to your creative process? Are you the sort of writer who enjoys doing readings?
I love reading in public!

6 - Do you have any theoretical concerns behind your writing? What kinds of questions are you trying to answer with your work? What do you even think the current questions are?
In my first book, Some Beheadings, I think a lot about thinking. I’d been reading Etel Adnan and Geoffrey Hill who are both very philosophical writers whose intellect is incredibly, though differently, sensuous. So I got caught up in this question of what it would it mean to feel your own thoughts and whether those feelings change in relation to different landscapes (it turns out they do). Right now I’m writing more about haptic encounters, especially in marketplaces. And I’m wondering what it does to us to collapse distance as against seeing across distance. The wondering seeps into my non-writing life (if not the other way round), so when I’m shopping, I’ll think about the difference between paying with cash (and how you pay with cash—do you place it on the counter or into the cashier’s hands and how long you take to count your money) and paying with virtual money.

7 – What do you see the current role of the writer being in larger culture? Does s/he even have one? What do you think the role of the writer should be?
In some ways I think writing is the culture, if one thinks of writing as a kind of making-of-the-world that’s happening all the time, even in speech. It’s just that the culture doesn’t recognize this about itself. I also keep noticing that ideas have been alive in language even before they have put forth as ideas. So maybe all writing is speculative, even when it’s looking at the past, and the role of writers is to speculate and to be always avant, without even knowing it? I mean, let’s be bold.

8 - Do you find the process of working with an outside editor difficult or essential (or both)?
I can’t think of a single bad experience I’ve had with an editor—maybe I’ve been lucky? I’ve certainly been lucky working with Nightboat, Action, and Further Other Book Works. It’s like having an incredible and detail-oriented conversation about language. I would say good editing is an art and, as art, is essential.

9 - What is the best piece of advice you've heard (not necessarily given to you directly)?
Maybe something like: practice kindness.

10 - How easy has it been for you to move between genres (poetry to translation to critical prose)? What do you see as the appeal?
Translation is a salve. You get to make all of these intricate decisions at the level of word, syntax, and sound (and, well, more), but you don’t experience the psychosis of the supposed “starting from scratch” that writing your own poems precipitates. Or maybe it’s a different type (pleasanter?) of psychosis. And of course, I don’t really see translating and writing as oppositional moves. This is to say, I’ll often work on translation and my-own-poetry projects simultaneously and sometimes also translate for the sake (=fun) of it.

Critical prose is another matter. I hate most of it and hate writing it. I do love essays and nonfiction, particularly when they’re, at heart, poetic: as in, they make something, or enact discovery or thought in some way. A small amount of critical prose does this and I don’t have a good sense of my own capacities here. The few essays I’ve written that I go back to are about poets I love, so it’s a way of reading them ever more deeply.

11 - What kind of writing routine do you tend to keep, or do you even have one? How does a typical day (for you) begin?
It depends on what other work (adjuncting, etc.) I have to do, but I’ve learned to stop feeling ashamed that I don’t have a set routine. I’m answering this question in December, when I’m off-term, so these days, I’ve been writing an hour or so in the morning and I try to do some translating in the evening. It’s lovely.

12 - When your writing gets stalled, where do you turn or return for (for lack of a better word) inspiration?
Books, movies, walks.

13 - What fragrance reminds you of home?
Petrichor. Also, there’s a particular kind of soft, humid breeze on a temperate day that is very precisely Bangalore (where I’m from), which I very occasionally experience in the United States.

14 - David W. McFadden once said that books come from books, but are there any other forms that influence your work, whether nature, music, science or visual art?
Maybe not nature exactly, but landscape, yes. I’ve written a few site-specific texts and felt very deeply the thinking I was doing in those places (dense, extremely biodiverse, tropical jungle), and felt it shaped by what was around me. And cinema. I love a lot of French and Russian cinema, and almost everything by David Cronenberg and Todd Haynes. I like movies that are incredibly spare (Robert Bresson) or terribly excessive (Paul Verhoeven)—they seem to operate like poems, with multiple systems of meaning not reducible to elements of narration.

16 - What would you like to do that you haven't yet done?
Travel dangerously.

17 - If you could pick any other occupation to attempt, what would it be? Or, alternately, what do you think you would have ended up doing had you not been a writer?
Fine-dining chef. (Would attempt; not inevitable).

18 - What made you write, as opposed to doing something else?
I don’t think I was good at anything else, really.

20 - What are you currently working on?
A book of poems tentatively titled Emporium. A translation project that isn’t official yet, so I won’t name it. Various syllabi.