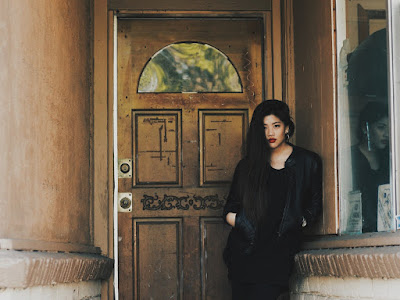 Leona Chen is the firstborn of parents raised under martial law in Taiwan, and the great-granddaughter of the aboriginal Ketagalan tribe’s last standing chief. The making of her debut collection, Book of Cord (Tinfish Press), was a 20th birthday gift to herself and to Taiwanese democracy. She is an undergraduate at Washington University in St. Louis.


Book of Cord is my very first collection. It has made me feel brave, especially considering I have never trusted that my art could be enough. It's strange that literature and lyric have so often been my salvation, but when it comes to becoming a "legitimate" writer, a published one, I still doubt that I'm worthy. I have been more confident in my lesser skills.


2 - How did you come to poetry first, as opposed to, say, fiction or non-fiction?


There is more universality in poetry. The poem to begin all poetry for me was from Rilke's Book of Hours. (Nearby is the country they call life/You will know it by its seriousness/Give me your hand). I was eight. I wasn't reading Rilke, I was reading the diary of some fictional Jewish girl living in Austria during World War 2. It had been her brother's favorite poem. I was a literal reader, or perhaps not empathetic enough to identify with her at the time, but the poem changed me in some significant way. I remembered it for over a decade, until I was old enough to read the entire piece, properly. And it has continued to change me. I borrowed those lines in a poem to my own sister.


3 - How long does it take to start any particular writing project? Does your writing initially come quickly, or is it a slow process? Do first drafts appear looking close to their final shape, or does your work come out of copious notes?


I did all of my work as a student, so I always had weekly deadlines. One would think working with assigned topics and time frames would be frustrating for a creative. But I liked the walls, the expectations. And I liked pretending not to understand them. We would be told to write about awkwardness, or ekphrastic poems from our museum, and I would somehow always turn in something off topic like, oops I wrote about being Asian American again.


4 - Where does a poem usually begin for you? Are you an author of short pieces that end up combining into a larger project, or are you working on a "book" from the very beginning?


I didn't realize I would be working on a book until I'd gone through semesters of poetry classes wanting only to write about the diasporic experience. And then I had to compile my works into a final portfolio during a docu-poetry class and I thought I might as well stop pretending I didn't have some ulterior agenda going on. It wasn't about writing a coherent collection. It was about having so much unresolved angst, so little closure about who I was that I literally could not focus on anything else until this book became a thing. And now that it is a thing, I've dredged up too much stuff to move on.


When I imagine my poems, I don't really envision a 5' girl with a Disney/Hollywood accent reading them. I sort of ruin my own artistic aesthetic. I would rather never, ever perform my work. Also, I'm shy.


6 - Do you have any theoretical concerns behind your writing? What kinds of questions are you trying to answer with your work? What do you even think the current questions are?


I worry a lot about appropriating generational, ancestral trauma in my work, especially as a young writer wanting to tackle identity or persona poetics. I never want to conflate personal suffering - lost love, broken relationships - with the real violence of colonization, genocide, oppression. I feel it is clumsy, unethical even, to exploit histories where poetic rhetoric fails. I think most teenage writers (and I was one until very, very recently) begin with a repertoire of poems about heartbreak and angst, and then we struggle to transition to other topics without clinging onto those visceral aches that first propelled us to write. And so part of growing up as a writer, I think, is becoming more sensitive to an embodied relationship with history, space, and time. I would be upset if I was thirty and still writing about boys who didn't text me back.


To speak truths, no matter how small they are. Especially as a minority writer, or a writer more sensitive to nuanced experiences and perspectives..


I am lucky in that my editors, when I've had them, have been peers and professors who've treated my work with a great deal of kindness. Especially in introductory poetry classes, my lack of confidence meant that I would have been very easily discouraged from writing. I hope their generosity hasn't meant that I'm delusional about the quality of my work, but they've kept me trying and practicing, which is what matters, I think.


"In good writing, you must kill all your darlings." Written on the syllabus of my first college poetry class.


I'm still an undergraduate, so a lot of my writing happens in between other stuff - and very often during (the wrong) class. I've tried to develop a serious routine - something with a fancy voice recorder, or a schedule, or a Moleskine journal. I've tried sitting in very expensive cafes, or waking up with the sunrise. But pretty much every poem in this collection started off in the margins of Calculus problem sets or takeout menus at 3am. I am disciplined in most things - but not my writing.


I had a professor, Gillian Parrish, who talked about training an ear for lyric and rhythm. And I think part of developing an instinct for what sounds good and feels right is sifting through as much content as possible. It's like those psychological crosswords where the first word you find is your deepest insecurity or whatever. Whenever I felt uninspired, I'd skim walls of text, relevant or not, and find words with resonance, anything that felt extraordinary. And then I'd sort of play around with the energy - words like ghost and bone, they have a gravity. But in pairings - silk ghost, brittle bone, the alchemy changes.


12 - What fragrance reminds you of home?


I’m an Economics major – allegedly. I think a lot of my work is influenced by pretending to be analytical but always finding a human, softer approach so much more intuitive and fulfilling. I became really creative trying to explain to interviewers why studying poetry made me a better data scientist. I wanted to do everything, and the connective tissue inevitably becomes apparent.


I like variety. On any given day, because of the nature of my schoolwork (and not because I'm fantastically industrious), I bounce from econometrics analyses to sociological research to canonical poetry to really frothy chick lit. I can't say I enjoy it all equally, but it absolutely informs my work.


Talk to strangers who've read the book - if there are any. I would hope so.


I would have liked to be more of a writer. Occupation TBD.


17 - What made you write, as opposed to doing something else?


I write, and do "something else." I would probably be much better at one of these if I stopped worrying about being accused of not being practical enough.


Marilyn Chin, Revenge of the Mooncake Vixens. Biting and clever in a way I am not.

I will not embarrass myself by revealing the last great film, because I am a huge fan of exhausted and admittedly terrible mega-franchise films.