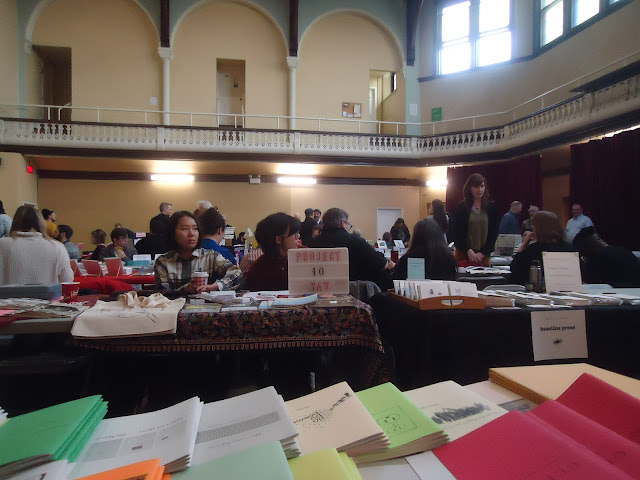 [the view from my table]

Further to my recent participation in Toronto’s Meet the Presses’ annual Indie Literary Market [see part one of my notes here; part two of my notes here], here are another few items I collected at said event.

Toronto ON: Toronto writer Kate Sutherland continues her exploration of animals real and imaged through her chapbook Beasts of the Sea (knife│fork│books, 2018), something the author biography references as well, presenting a bit more context for this current work: “She is currently at work on a new collection of poems on the theme of extinction.” Following her debut poetry title, How to Draw a Rhinoceros (Book*hug, 2016), the poems in Beasts of the Sea are similarly packed with an exploration based on both research and curiosity, moving through a sequence of dense lyric poems that point themselves toward magical beasts and pure scientific data. I am curious to see where this manuscript leads.

Red and white sea nettles, a large mass
of reed grass, various species of seaweed
adrift. Rock ducks and flocks of gulls
The frequent occurrence of animals
not commonly met in the open sea: sea otters
compelled by the structure of their hearts
to keep close to shore. We should have made it
in three or four days, ten at the most
had we taken advantage of the plainest signs
of nearness of land. We saw land as early as July 15th
but because I was first to announce it
and it was not so clear a picture could be made of it
the announcement was dismissed. Six wees
after leaving Avacha we reached land

Toronto ON: Another title from Desert Pets Press is Toronto poet Jacqueline Valencia’s chapbook LILITH (2018), a collection of short lyrics imbued with an undercurrent of soft anxiety attempting to seek out a sequence of calm. Sometimes the poems in LILITH achieve that calm, but the anxiety remains, ever-present, even if it remains muted, however hard the narrator and narration might attempt to push their way over and through, to what lies beyond. With the occasional light at the end of the tunnel, Valencia articulates some dark lyric stretches, domestic patters and rough patches; I am hoping both poems and narrators finally make it.

As you enter my living room, there is a black office desk in the far right corner. A black laptop with a broken screen sits beside a fingerprint-stained monitor above a crumb-infested keyboard. A grey scanner sits beside them, the top of it is cluttered with unfinished illustrations, my children’s drawings, old books needing to be put away. Two worn-down moleskine notebookskeep the papers in place. They are deep green, crammed with future waste paper and one possibility. A cracked mug adorned with a faded image of Stanley Kubrick waits by the keyboard with a cold layer of over-sugared coffee inside of it. A collection of dusty race medals hangs on the wall in front of the desk and below it resides a salvaged dollhouse. The dollhouse stores the overflow from the desk: papers, kids crayons, unread pamphlets/materials, and one vintage bowler hat that was used once in a community theatre production of Waiting for Godot.

There’s a soft tabby cat purring on my lap.
I’ve lost something.