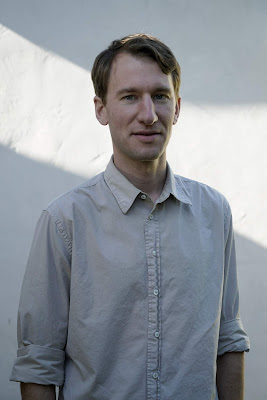 Geoffrey Hilsabeck is the author of Riddles, Etc. (The Song Cave, 2017). His poems and essays have appeared in The New York Times Magazine, Tupelo Quarterly, Lit Hub, and elsewhere. He lives in Morgantown, WV.

I don’t think my first book changed my life in any meaningful way. I suppose it granted me some legitimacy, but that’s bullshit, of course.

Good question. When I was younger I wanted to be an actor. (Still do, actually.) Then in high school I wanted desperately to be a painter and idolized Jackson Pollock. Freshman year of college I read Tender Buttons and got my first email account: those two together seem to have launched me on my current pursuit as poet. Also, I watched a TON of Marx Brothers and Laurel & Hardy movies as a kid. I watched those movies over and over again. They lack plot entirely—they have situations which serve as a kind of string on which to hang gags. Poetry’s like that, I think.

Each project seems to be different. What holds true is revision. It’s a sickness, really, the way I turn and turn the thing, constantly changing its shape until it’s just so. Except it’s never just so.

Another great question. Maybe it’s like the proverbial mustard seed: it starts with a line that drifts in from the ether—or the PA system at Kroger, as happened recently—and, with luck, becomes something bigger, a leafy place for the birds of the air to come and lodge.

I like giving readings because I write poems hoping someone out there will read them and find, as I have so often found in other people’s poems, some scraps of language to help make sense of their life, if only briefly.

I think poets are advocates for poetry. They pursue their calling, which is a noble, or at least an admirable, and very rare, thing to do. That kind of approach to life is an expression of privilege, of course, but also an invaluable service to the culture, such as it is, and I’m not sure it’s anything. The poet’s pursuit has nothing to do with money (though sometimes with other forms of capital), which in American life, enamored, devoted, besotted as it is with money, is pretty cool.

Writing is so lonely. It’s nice to have a partner sometimes, someone who like you is invested in helping this thing find its proper shape. Ben Estes and Alan Felsenthal at The Song Cave were wonderful editors—and promoters—of my book. I’ve written a number of essays, and those always go through at least one round of edits, sometimes more. I’m always grateful for the help.

Go on your nerve. That’s Frank O’Hara. And I once heard Frank Bidart talk about how important it is to follow your nose as a reader. I guess I perk up when someone named Frank starts talking.

10 - How easy has it been for you to move between genres (poetry to essays to translation)? What do you see as the appeal?

It find it quite hard, actually, but then again writing is hard. The formal demands of poetry and nonfiction are so different, and poems are so small—mine are, at least—and precise. It’s hard not to carry that approach into prose, but prose has to be bigger, looser. Poetry has a lot to do with the moment, is made up of a moment, even, and creates of that a new moment for someone else, while prose takes place over a long period of time, and each moment is less important than the accumulation of moments. In my experience (I translated a lot of Portuguese poetry about ten years ago), translation is as much an act of reading as of writing, the most demanding and intimate kind of reading. I can’t wait to do more. Just have to learn a new language.

All summer I wrote late at night and loved that. Riddles, Etc. was mostly written at 4 and 5 in the morning (coffee, cider donut), before my daughter woke up and before I went to work.

Cedar, Jello, whatever heavy smell history books and murder mysteries give off

I know almost nothing about science—it’s pretty embarrassing, actually—so every time I encounter a fact about the natural world I feel awe, and awe can be a good place to start. I’ve always loved visual art, esp painting—I also love film stills—and I like to write my way into images.

I’d like to act in a Shakespeare play, any part, doesn’t have to be a lead but preferably one with some depth. Malvolio, maybe. Prince Hal. Edgar in King Lear would obviously be fun, but I’d settle for Kent.

I have dreams of being a fireman.

After reading the painter James Rosenquist’s autobiography, I realized I could never be a painter because they’re always in debt. Also, I can’t draw. I don’t have the discipline to be a professional musician. I’m clumsy and ungainly, with long arms and legs, so dancing’s out. That leaves writing. But I think what really drew me to writing was that, as a medium, it’s the one most amenable to not making sense or making other kinds of sense. There’s a great Groucho Marx sequence (I think it’s in A Night in Casablanca), when he’s working the desk in a hotel and says to someone, ‘let’s change all the numbers on the rooms.’ ‘Think of the confusion!’ the person say. ‘Yes,’ he responds, ‘but think of the fun.’ That changing of the symbols so that they no longer stand for what they’re supposed to stand for is very appealing to me.

Bad Boy by Walter Dean Myers. Amazing. I wish everyone would read that book.

I’m woodshedding, and casting about. I recently finished a long poem (long for me: six pages) about a silent film actress named Mary Nolan. It’s a cross between Hollywood Babylon and an Old English elegy. And I wrote an even longer ekphrastic poem over the summer about some drawings by Robert Rauschenberg. I’m working with my Quaker political advocacy group: we write letters and lobby our congressional reps on issues around peace and social justice. I’m going to protests. I’m teaching. My wife and I just had a baby, though, so mostly I’m trying to keep him alive and healthy.

Posted by rob mclennan at 8:31 AM
Labels: 12 or 20 questions, Geoffrey Hilsabeck, The Song Cave