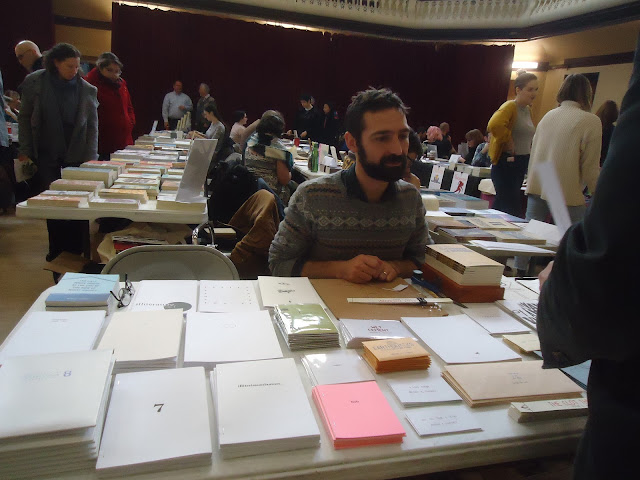 [Michael e. Casteels and his Puddles of Sky Press]

Further to my recent participation in Toronto’s Meet the Presses’ annual Indie Literary Market [see part one of my notes here], here is another item I collected at said event (don’t you feel bad for missing it now? I mean, you could just show up today to the ottawa small press book fair to feel better about missing out on such a grand opportunity):

Toronto ON: From Emma Dolan and Catriona Wright’s Desert Pets Press comes Montreal writer Kasia Van Schaik’s debut chapbook, Sea Burial Laws According to Country (November 2018), a remarkable assemblage of short prose pieces writing on violence, loss and grief, playing with the comparisons between  countries, from recent events to cultural differences. Her lines are quite striking, utilizing a straightforwardness that manages to strike with great force, writing a series of first-person narratives interspersed with short, self-contained asides, writing the murder of Swedish journalist Kim Wall on a submarine off the coast of Denmark, to drowning, and bodies of water, stingrays and the Portuguese man o’ war, to this small tidbit to open the short prose poem “US,” writing: “Family members are not allowed to attend a burial service on board a military vessel.”

A freelance journalist is last seen on the deck of a homemade submarine. Her body is found five days later, on a beach south of Copenhagen. Her head is missing. Her torso weighted down with metal rods. This, the submarine owner explains when questioned by police, was to ensure a proper sea burial.

Setting the tone for the collection, the chapbook opens with “SEA BURIAL LAWS ACCORDING TO COUNTRY,” a single-page scene that begins: “He wants to be cremated and she wants a burial at sea. Not that she’s dying, but eventually, when she does, she wants a water burial. This is a deal breaker for him but she will not compromise. Predators. Bathers. Contamination, he says. Water burials are restricted, even prohibited, in most countries. What is her reason for wanting one anyway? Why does she always have to complicate things?” It’s not often that I see a publication so compelling that I have to tell everyone to pick up a copy. Kasia Van Schaik’s work is damned good. Pick up a copy.

Yesterday the sea was thick with pulverized jellyfish. I met a 5-year-old girl collecting deposits in a net. She held the net out to me so I could see the blue threads that ran through the viscous. Do they still have brains, she asked, or memories? Actually, she didn’t say “memories.” What she said was “feelings.”

I walked along the margin of the tide, thinking about a photograph I’d seen of a girl waist-deep in a dumpster filled with fortune cookies. I hadn’t recognized her at first but then realized I knew her, or had known her when she’d been unhappy, or less happy, than she was now.

But again that could be a feeling (memory).

I’m aware of the waves all night, receding, then rushing towards me. I dream about a friend I have given up thinking about. He’s wearing a white suit, about to be married, trying to convey an important message to me, a set of instructions, but his voice is drowned out. (“STINGRAY”)