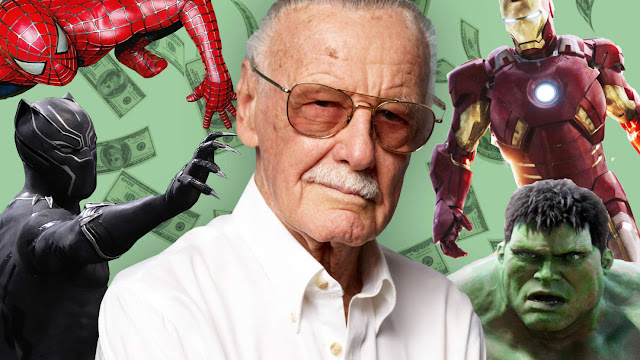 Given his death a few days ago, I feel like I have to talk about Stan Lee, well-known as one of the most important elements of establishing Marvel Comics, making the “Silver Age of Comics” an actual thing (apparently DC started it officially with a reboot of the Flash; who knew?), and promoting himself as much as he promoted anything else (I shall miss his movie cameos; having him sit with the Watchers was a thing of genius, connecting all of his cameos together in onebrief clip). Co-creator (with Jack Kirby and/or Steve Ditko) of what would appear to be nearly the entire original Marvel stable of characters, the effect and legacy of Stan Lee is complicated, enough that it is equally both overblown and understated. He helped create himself in his own image, after all, something that took away from Kirby and Ditko for many years, only recently acknowledged as co-creators of all those characters Lee was supposedly singularly responsible for (I didn’t think I could begin without at least acknowledging that).

There have been some wonderful appreciations and hefty obituaries posted so far: what would I even have to add? Not much, possibly. Nothing that hasn’t been thought or said a thousand times over, I suppose. But here goes.

What can I say? I’m a Marvel guy from way back, and still visit Heather over at Comet Comics (now ensconced in the basement of Black Squirrel Books) on a weekly basis. Over the past few months, finally bagging some twenty-plus years worth of comics (post-basement flood, as a way of organizing), I’ve discovered that I actually have some 10,000 comic books sitting in our wee house (not to mention the growing collection of trade editions). I’d say some 95% of these are Marvel titles.

I was a quiet, solitary kid, and comics provided touchstones to the larger world. The stories were funny, and touching, and personal, alongside the big explosions and sequence of conflict upon conflict. There were words I picked up I hadn’t seen or read previously; there was a consideration of helping others without the expectation of reward. There was the idea of doing something for someone else simply for the sake of doing it, for the sake of making things generally better for everyone. The idea of doing something because you should, even though it might be hard. Especially if it might be hard. There was the idea that one could work slowly, consistently and solitary on something that others didn’t know, didn’t understand or actively despised, and still be able to continue. The value lay in acknowledging that such value was in the doing.

Superman or Batman seemed pretty abstract, but a character like Spider-Man, created by Lee and Ditko, felt different. I identified with him at a pretty early age, with the early/mid-1970s run of Amazing Spider-Man, as well as those first few years of Peter Parker: The Spectacular Spider-Man, being pretty foundational for me. Despite a 1974 issue of The Fantastic Four being one of my first purchases, it was a while after before I managed to regularly get into non-Spider-Man titles (my mother’s lack of interest in assisting my purchases, as well as our rural address, did make following titles regularly pretty difficult).

I saw that it was possible to be lonely, unpopular and bullied and still not get worn down. It was okay to worry and be anxious and even a bit neurotic. And still be able to help. Be heroic without focusing on the hero part. Just be fucking helpful, whether saving a life or just making someone else’s day just a small bit better. And help because you should, understanding that even the smallest act could make a very big difference. It was possible to win while still losing. It was possible to keep going, and know it would eventually, always, improve. 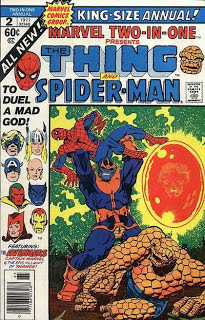 And that you don’t have to show off how smart you are. Just be smart. A sequence of panels from the second Marvel Two-in-One annual (1977) was always one that stuck with me, Thanos seeing how intelligent Spider-Man actually is, getting Thanos to pause, talk, and allow for him to formulate a plan. I like your friend, Grimm. He’s a schemer.

Years before comics were taken seriously by the mainstream, I learned as a very young person that it was possible to tell good stories in comics; good stories that were worth telling. Important stories. When Harry Osborn overdosed, or the death of Gwen Stacy. Loss upon loss, one might say, throughout the entire history of Spider-Man, losses that were rarely pushed aside, or forgotten about. Losses that weighed upon him (do you remember him smashing a table in Avengers Tower after House of M? gut-wrenching). And yet he kept going, keeps going; with optimism and good humour, in part due to sheer bloodyminded resilience. Keep going. Keep fighting. Don’t give up.

And bad jokes were always a good deflection. And if only you laugh at your own jokes, that’s okay too.

I know that a number of the examples I’ve offered weren’t actually done by Lee himself (Rascally Roy Thomas, for example), but I feel as though there’s a worldview I have in my head that was created, in part, by those three gentlemen at Marvel Comics, way back in the 1960s. As a kid, I saw Stan Lee as the man behind it all (the self-promoting front-man that he was), since coming to realize how it really was the triumvirate of Lee/Kirby/Ditko who created the foundations of the Marvel Universe, but for me in the 1970s (and, I’m sure, thousands of other readers). What did I know? Stan Lee’s Bullpen Bulletins made one feel included in a secret club, one that only those of us who were serious readers could belong to, although I’m still annoyed that a) I was too young to catch the Friends Of Old Marvel and The Merry Marvel Marching Society and b) I never did win a coveted No-Prize.

Thanks for this, Stan Lee. Thanks for all of this, and to Kirby and Ditko as well. With Lee gone, he’s the last of the lot, the last man standing of a particular era of storytelling, but one that opened up an incredible array of other possibilities. And, as the Man himself said: Excelsior,