We are raking leaves. Or I am raking leaves and she is wandering around picking up leaves, and a man shows up. He looks hot, I meat he looks overheated and sunburned or, the red face of an alcoholic, and I know when he calls me “ma’am” that he wants something. The usual “your neighbor told me to ask you,” then shows his hand, the infected gash. I remember this from subways, the men with amputations exposed or diseased faces or wounded legs—he shows his hand and begins to speak. I’m standing still, not saying no not saying yes, I’m listening, and she walks toward him and holds out a leaf, which he takes, then she takes it back. He laughs a bit uncomfortably, and continues: the wife who left him, the kid at home, and how he had a Band-Aid but sweated it off, how he used to bring in two thousand a week, but now zero, and he lifts his hat to show his other wound, not so bad as the one on his hand, more a scrape or a bruise on the forehead, and then, almost in slow motion, still standing before him, she opens her arms and wraps them around his legs, her face too close to his crotch. I, also slow, say Lucy, come here, and he pats her on the back and says, aren’t you affectionate. I take her hand and we go inside to find money, a ten is what I have, and I return and give it to him. Then he leaves, not without offering to bring her his son’s toys, since his wife left with his son. I say no, thank you, you don’t know, he says, how awful this is to have to ask for work this way, and I say I’m sorry, and have a good day, which feels stupid. We are raking, there is silence, and I say, why did you hug him? I don’t know, she says. I say, if Mommy or Daddy are not there, then don’t hug a stranger, okay? but if we are and say it’s ok, it’s ok. There is another silence. Then she says, don’t ever say that again.

Part critical diary and part theatrical script wrapped up in the minutae of the domestic prose poem, Denver poet and critic Julie Carr’s latest poetry title is Real Life: An Installation (Oakland CA: Omnidawn Publishing, 2018), a book that moves the contemporary lyric through the intimate moments and domestic patter and patterns of her household, children and childbirth, time, capitalism, American poverty, foreign and domestic policy, violence and mass shootings, military engagements and foreign wars, globalization and global warming. “It’s difficult to move off the facts.” she writes, as part of the powerful and densely-populated sequence “INTERLUDE: SILENCE IN 20 PIECES.” Further in the same poem, writing: “Rests. I am allowed the present tense.” As part of a 2014 interview for Touch the Donkey, Carr spoke to the origins of the manuscript, writing:

A: Like a lot of poets, I found myself in a situation where I had a number of manuscripts sort of lined up, ready to send out or even slotted for publication, and it seemed to be happening too fast. It was the summer of 2011, and my partner Tim said to me, you need something to write that will take you at least five years. In response I created a process for myself – I would write every day from labor day to labor day to labor day, beginning in 2011. I did not allow myself to read back what I’d written, except at three-month intervals, and then I could do only very slight cleaning for spelling and stuff. That way I was always writing into an unknown, forgetting what I’d done the day before, keeping it strange and off-balance. Of course themes and forms emerged, but they’d shift pretty regularly, and I had to allow that, since I was not editing at all. At the end of the two years, I had twelve sections and a total of almost 600 pages. Now I am editing, forming, shaping, and cutting most of it. The editing process will take as least as long as the original writing took. Probably longer.

The title came from my daughter, who was four when I started. She’d often refer to things and events as “real life,” in order to distinguish them from stuff that was happening in her imagination, in her dreams, or in stories and movies. For kids at that age it’s important to clarify, since so much is going on all the time that is not “real life” (and they are often unsure what is and what isn’t real). I started to notice that when adults use the phrase “real life,” they usually mean work, or the mundane, the everyday, as opposed to art, sex, love, illness, dreams, play – pretty much anything that is any fun or has any intensity attached to it qualifies as not real life! I thought I’d trouble the term, while also thinking a lot about labor, work, economics – throughout the writing.

I began thinking about installation art first because I always am, but second because of a talk Fredric Jameson gave in which he claimed that the artists of the future will all be installation artists, or something like that. I can say more about that if you like. 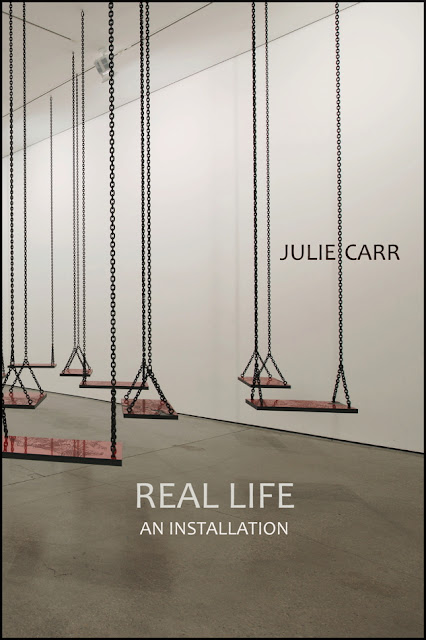 There is an incredible immediacy and vibrancy to the accumulated threads and fragments that swirl, loop and connect through the poems that make up this collection. There is something, one might say, of the “catch-all” to her structure, allowing anything and everything to become an integral part of the whole unit, reminiscent of similar umbrella structures by other poets, from bpNichol’s The Martyrology to Gil McElroy’s ongoing “Julian Days” sequence to more recent works by Emily Izsak. Theirs are the through-line that catches every bit of material that floats by, every scrap of it as important as every other. As the poem “TRY,” set at the openings of the fourth section, “FOURTH MOVEMENT: ALL THAT IS SOLID,” reads:

Coleridge too noticed the through-line between think, thank and tank

And Novalis: Language is a force-field of combinatory possibilities. Speaking only to speak we express the most stupid and original truths!

Start again: Only in free movement does the world render itself real

While Real Life: An Installation is certainly a collection that could and might even possibly contain anything and everything, it is hardly the mishmash such an idea might suggest—quite the opposite, in fact—strikingly clear, clean and coherent—and something that presents the volume as a whole as something incredibly powerful as an indictment on violence. In its own way, the expansiveness of the collection, paired with its accumulation of small, deeply personal and intimate moments, combine to create a book articulating a very particular series of moments in American culture, capturing elements of her world from the immediate to the historic to what comes through the news, and how one can’t help but bleed into the other. If poetry is the news that stays news, I couldn’t think of a better example of Pound’s mantra than Julie Carr’s Real Life: An Installation.

Pretend dinner made of rocks. Stretched just like a cat at meowed again.
Lulu went to “work,” came back with more rocks, their “groceries.” Scratched her head.

But I don’t want to stay here all by myself. (“DREAMS OF TEMPORARY SPACES”)

Posted by rob mclennan at 8:31 AM
Labels: Julie Carr, Omnidawn, Touch the Donkey