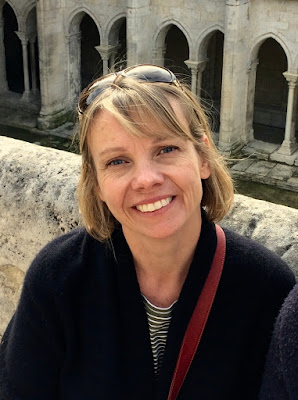 Jenny Haysom was born in England and raised in Nova Scotia. She completed a Master's degree in English Literature at the University of Ottawa in the 90s, and has since worked for independent booksellers and the Ottawa Public Library. Her writing has appeared in a variety of magazines—most recently in The Walrus, The New Quarterly, and The Fiddlehead. A chapbook of poems, Blinding Afternoons, was published by Anstruther Press in 2017, and her debut collection, Dividing the Wayside, came out this fall (2018) with Palimpsest Press. Jenny was on the board of directors for Arc Poetry Magazine for several years, guest-edited a special issue of children's poetry (2012) and was prose editor from 2014-16. She lives with her family in Ottawa.

My first chapbook (Blinding Afternoons, Anstruther Press) and my first book (Dividing the Wayside, Palimpsest Press) have made me feel legitimate, helped me to come out––in my forties!––as a writer and a poet. Until now, writing felt like a secret pastime, as something I did to avoid housework. Elizabeth Bishop once said “there’s nothing more embarrassing than being a poet.” Occasionally, I’ve felt embarrassed––or even ashamed. Many of my friends and family members don’t read poetry––don’t value it the way I do––and that’s okay. But now I acknowledge my vocation.

I do write prose, but poetry certainly came first to me. It’s easier to write a bad poem than a bad novel. All my life, I’ve had ‘great’ ideas––but seen few of them through to the finish line. I’m also a perfectionist. A poem is the best place for brief, compressed and refined expression.

As well as loving the musical qualities of language, I like its visual possibilities. Arranging words into lines and stanzas––using the space on the page––adds a wonderful dimension to the art. Also, what’s more exciting than a fresh and vivid metaphor?

It takes me a long time to do anything. It’s a slow process with copious, painful drafts (that I find––perversely––somewhat pleasurable).

Very occasionally, something comes to me almost fully formed––and I experience a joyful rush of energy that feels a bit like the first warm and sunny day after a long winter.

4 - Where does a poem usually begin for you? Are you an author of short pieces that end up combining into a larger project, or are you working on a "book" from the very beginning?
Ideas for poems really do strike me like lightning––often in the shower. Then I spend hours and hours refining that first flash of insight. In between poems, I try to write some prose and do the laundry.

I don’t often think about the larger project or the book.

Do you want me to be honest? Readings are terrifying and draining for me.

I always have theoretical concerns and try to write about ideas and problems––but I seldom provide answers and prefer to pose questions. It may not be a popular or fashionable position to take, but I believe that poetry––like all writing––should try to communicate with the reader (rather than obfuscate and confuse). A poem can be––should be––complicated, or even difficult. But clarity and meaning are important to me.

I don’t think that there’s one role to be played by any writer or artist. Today, being a poet seems to mean being a good or ethical person––or at least being seen to be good or ethical. In my view, artists––like all people––are flawed and complicated.

I’ve found it to be both: difficult and unhelpful/ essential and productive. It all depends on the editor––and the chemistry between the two writers.

I should mention that I’ve played both roles.

Go for a walk.

On a perfect day, I wake up early, drink lots of coffee and write all morning until one or two in the afternoon. Then I go for a long walk and solve a problem on that walk.

Those days are few and far between.

I find inspiration everywhere. The last poem I wrote was inspired by my mother-in-law being upset that her son––my husband––had holes in his socks.

A tangy smell in the woods. The sad, sulphurous stench at the beach. Ivory soap. Toast and coffee––my favourite foods.

I must admit––other people’s books have been essential to my own creativity. In past work, I’ve been influenced by or made reference to Chaucer, Donne, Bishop, Dickinson, Auden, Larkin, Stevie Smith, Roethke, Plath… not to mention living poets. I also like natural history and visual art, and enjoy reading books on these subjects.

Live in another province or country (which I did in my youth). Master the French language (still working on it––though it’s probably too late).

I could have been a visual artist of some kind––maybe an illustrator. I haven’t yet given up on the possibility, but maybe I should.

A great book that I recently read was Lorrie Moore’s novella Who Will Run the Frog Hospital? My daughter and I went to see Ladybird at the Mayfair Cinema last winter and we both cried at the end. Both are coming of age stories.