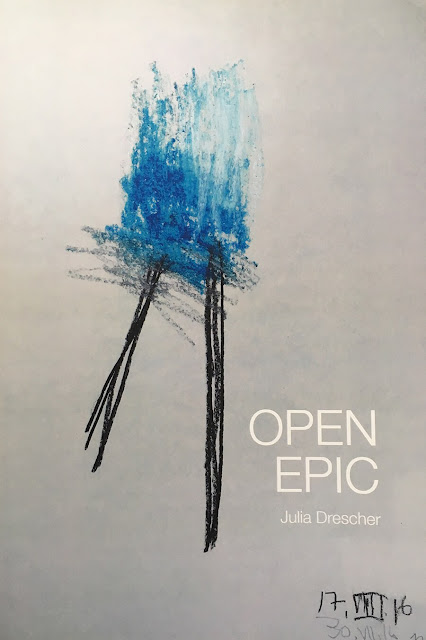 Colorado poet and editor Julia Drescher’s debut full-length poetry title is Open Epic (Fort Collins CO: Delete Press, 2017), a sequence of poems constructed via fragments. Structured in four poem-sections – “Hilda’s Hunting,” “Open Epic,” “Hands Chalk the Walls” and “Plural Bell,” alongside the opening lyric poem “[through her]” – the poems in Open Epic are expansive and detailed, evasive and suggestive, as her opening poem begins: “through her // the emptying // forms [.]” There is a lot going on in this collection, and a great deal to admire. Really, one might say that Open Epic is entirely a book on form, as much as it is an epic poem moving through and across the story of Hilda, who, by the end of the first section:

What rights of warren

Still thrilling what chase what viscera

Delicious our sad to say reports our

Clicks or rattles that is to say