Stuart Ross (with twenty-nine collaborators), Our Days in Vaudeville 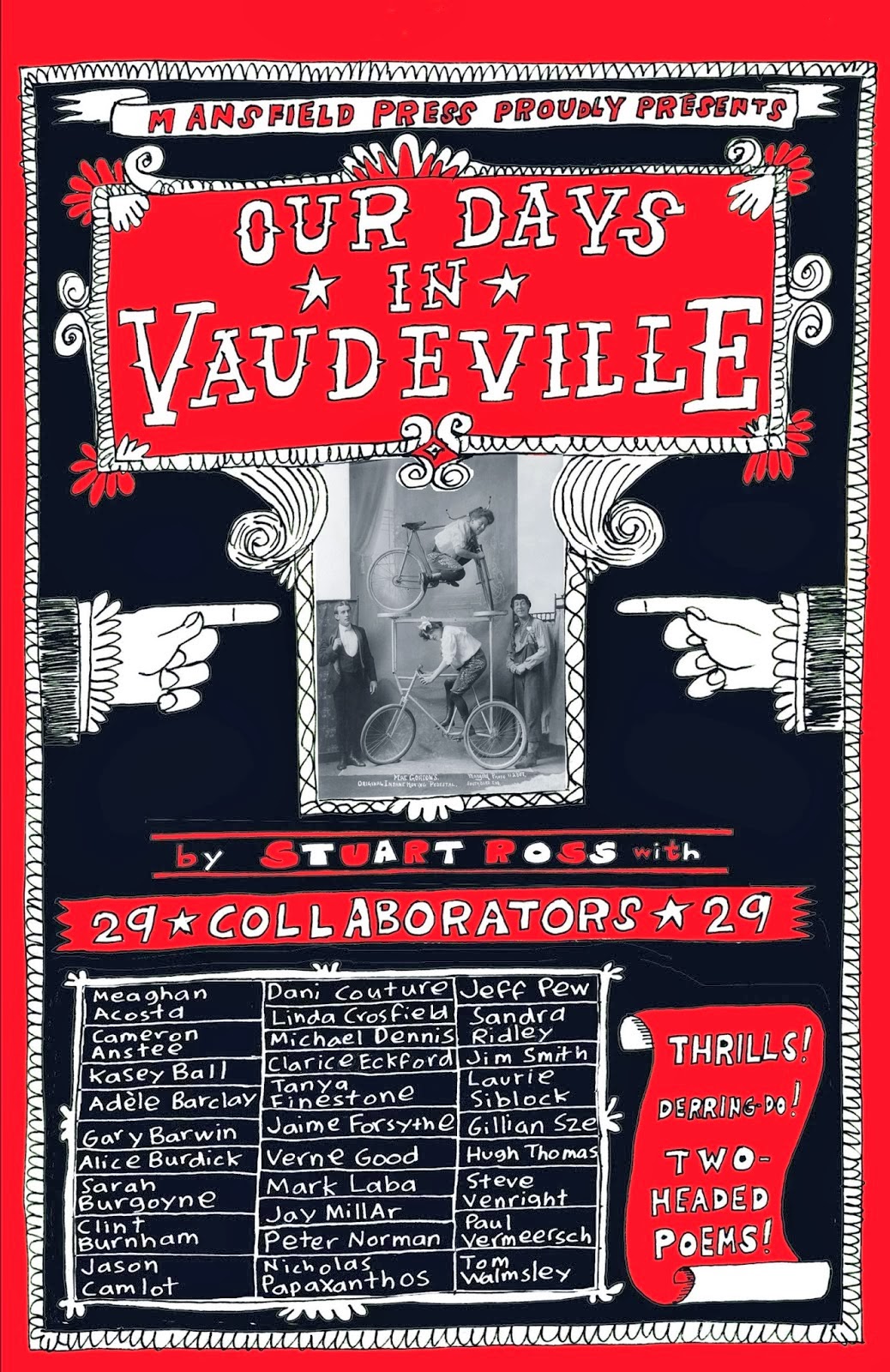 It would seem that the benefits of literary collaboration, in part, is in how the process, when done properly, can’t help but force a writer to broaden their range. In Our Days in Vaudeville (Toronto ON: Mansfield Press, 2013), Cobourg, Ontario writer, editor and publisher Stuart Ross has collected a book’s worth of collaborations in the short poem he’s composed over the past couple of years with twenty-nine different collaborators. His list of collaborators includes poets well-known and emerging, as well as some who really haven’t published previously, and include some expected and unexpected names, such as Mark Laba, Cameron Anstee, Gary Barwin, Alice Burdick, Michael Dennis, Dani Couture, Jay MillAr, Peter Norman, Hugh Thomas, Paul Vermeersch, Sandra Ridley and Jaime Forsythe. As Ross writes in his introduction, “This book contains collaborations with more than two dozen poets, all of whom are also friends of mine. […] Sometimes we write a word at a time, or two; sometimes a line at a time or a stanza; sometimes we just write for a while and then let the other take over.” In an introduction to the collection, Ross discusses his history of collaborating, both generally and very specifically, working through his lengthy collaborative histories with Mark Laba and Gary Barwin, to more recent projects, and commentaries on a number of the pieces included in this book. The introduction opens:

Collaboration has been part of my practice since I was a little kid. My first collaborator was Mark Laba, who lived in a triplex on the other end of Pannahill Road, where we both grew up in Toronto’s Bathurst Manor neighbourhood. As children, Mark and I collaborated on a cotton boll weevil cemetery; on drawings on sheets of cardboard we pulled from our dads’ laundered shirts; on Man from U.N.C.L.E. scenarios in my backyard that inevitably included us jumping repeatedly off the back porch into the grass.
In the experimental high school we both attended—the Alternative and Independent Study Program (now Avondale Alternative)—we began our literary collaborations. Inspired by Joe Rosenblatt, bill bissett and the Four Horsemen, we began creating sound poetry together. At sixteen, in the mid-1970s, we were doing readings at our school, and downtown at the Axeltree Coffee House in Trinity Church. We also wrote stories together, on yellow foolscap fed through a manual typewriter. A decade later, in the computer era, or maybe it was just the electric-typewriter era, Mark and I wrote a novel together, The Pig Sleeps. Broadly speaking, I provided plot and Mark provided the most bizarre similes in the history of Canadian literature.

For whatever reason, literary collaboration has long been treated as a kind of parlour trick, an amusement that exists outside and yet alongside what might be called ‘serious literature,’ even to the point of collaborative works ignored outright in favour of a particular author’s works. Over the past decade-plus there has been an enormous amount of collaborative poetry to appear in print in Canada, including: Christine Stewart and David Dowker’s Virtualis: topologies of the unreal (Toronto ON: BookThug, 2013); Douglas Barbour and Sheila M. Murphy’s Continuations (Edmonton AB: University of Alberta Press, 2006) and Continuations 2 (University of Alberta Press, 2012); Larissa Lai and Rita Wong’s Sybil Unrest (Vancouver BC: LineBooks, 2008; New Star Books, 2013), Oana Avasilichioaei and Erin Mouré’s Expeditions of a Chimaera (Toronto ON: BookThug, 2009); Gary Barwin’s Frogments from the Frag Pool (with derek beaulieu; Toronto ON: The Mercury Press, 2005), The Obvious Flap (with Gregory Betts; BookThug, 2011), and Franzlations: the Imaginary Kafka Parables (with Craig Conley and Hugh Thomas; New Star, 2011); Bill Kennedy and Darren Wershler’s apostrophe (Toronto ON: ECW Press, 2006) and update (Montreal QC: Snare Books, 2010); George Bowering and Ryan Knighton’s Cars (Toronto ON: Coach House Books, 2001); Peter Norman and Stephen Brockwell’s chapbook-length sonnet-collaboration Wild Clover Honey and the Beehive: 28 Sonnets on the Sonnet (Ottawa ON: The Rideau Review Press, 2004), as well as The Capilano Review’s “Collaborations” issue (3.4; Winter 2008). One could also mention derek beaulieu and Neil Hennessey’s TransCanada Research Team, various ongoing works by jwcurry, earlier works by bpNichol and Steve McCaffery’s Toronto Research Group, Douglas Barbour and Stephen Scobie’s sound-collaborations, and sound-poetry groups The Four Horsemen and Owen Sound, as well as an earlier collaboration between Stewart, Lisa Robertson and Catriona Strang produced as The Barscheit Horse (Hamilton, ON: Berkeley Horse, 1993). Given just how prevalent the form (or the act) has become, shouldn’t collaborative works be taken more seriously? Ross, in his introduction, continues:

I recognize that this book is insane. And I think it’s the second book of its kind ever published in Canada—one poet collaborating individually with a couple dozen friends. (The first was If I Were You, by Ron Padgett and twelve collaborators, published by my Proper Tales Press.) For me, it’s a dream book. It appeals to both the reckless experimenter and the commie collectivist in me. There’s beauty in here, and beautiful terribleness. There’s adventure and head-butting and collegiality.
Mostly, there is the vaudevillian unexpected—both in the creation of these pieces, and in the reading—and the vaudevillian eclecticism: I’m a devout believer in the incohesive poetry collection. My twenty-nine brave and wonderful collaborators and I have done our thing: now we’re sliding the book across the table to you.

I know that there was a point during the late 1990s and early 00’s that Toronto poet Stephen Cain was working on ten collaborations with ten different poets, including Jay MillAr, Sharon Harris and Christian Bök. Each of these works were said to be deliberately constructed with entirely different structures. I know a number of these works were completed, and produced as small chapbooks, with the idea that once the ten works were completed, Cain would attempt to get the entire manuscript published by a trade publisher. I know that the separate full-length prose collaboration between Cain and MillAr, Double Helix (The Mercury Press, 2006), saw print, at least. But whatever happened with this other project?

The sun enters the room like a blade of music.
An earwig crawls up the walls: a sudden aneurysm.

Whoever invented this chair must perform miracles—
Levitation may transpire in any cave. It’s easy to forget

A quietly brainwashing trigger finger stuck
In the wall-hole that holds the lost smile.

See how things look from down here? That motion
Shakes spiders from the ceiling, where they’ve

Been reminding the other insects
Of tedious obligations. But in the dark pantry

The organic environmental babies count
Their bundles of cash; their endless one two

Of their parts to comprehend.

As with what Stephen Cain appeared to attempt in his seemingly-abandoned collaborative manuscript, one of the strengths of the works in Our Days in Vaudeville is in its variety. For anyone familiar with Ross’ numerous individually-authored trade collections of poetry, his “voice” in this collection is quite clear, yet amorphous, as the poems progress. There is something of Ross the shape-changer to the collection as well, allowing different facets of his own work to shine through, depending upon whom he might be working with. The shifts throughout this collection are quite subtle, with some more overt, as the sound and score of his own writing weaves, eddys and returns, while bringing in structures and other elements familiar to each participating collaborator. In the poem “DOWNSIZED,” composed with Jay MillAr, one can see both authors on equal terms, managing a collaborative space in which they do balance remarkably well, and yet the poem would have been impossible by either individually. In the six collaborative poems included composed with Ottawa poet Michael Dennis, one can clearly see the conversations about writing and form between the two, written in straight lines and straightforward patter. In the collaborations with Gary Barwin, they eschew the direct statement so prevalent throughout the rest of the collection for a more fragmented, even choppy, line, breaking down phrases into a series of staccatos. What is interesting in this collection comes in part from a familiarity with the names within, and seeing how some pieces might have been triggered from conversation, or a prevalence for a particular kind of stanza or line, watching each of the participants share the tools of their individual practice in different ways.