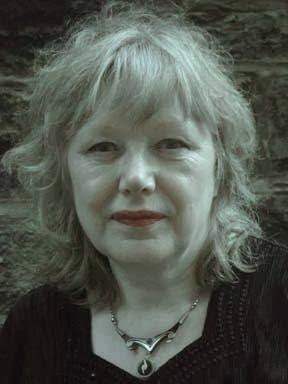 Geraldine Monk was born in Blackburn, Lancashire in 1952. Since first being published in the 1970s she has written six major collections of poetry and numerous chapbooks. Her writing has appeared extensively in the both the UK and the USA. As an extension to her activities in poetry she collaborates with many musicians including Martin Archer, Charlie Collins and Julie Tippetts. A collection of essays on her poetry, The Salt Companion to Geraldine Monk, edited by Scott Thurston, was brought out in 2007 by Salt Publishing.

1 - How did your first book change your life?
Not at all. My life had already changed and writing poetry came out of that change, not the other way round. My first book was hardly seen by anyone except a very few friends and contacts, Jeff Nuttall being one of them but in 1974 I’d entered a poem from that chapbook in a local poetry competition which resulted in me spending a week with the novelist Angela Carter at Lumb Bank (the Yorkshire home of Ted Hughes and Sylvia Plath now an Arvon Foundation writers seminary). It was the first and last time I entered a poetry competition but that week with Angela was pretty special. We smoked and danced a lot!  She was marvellous. She wanted to ‘mother’ me which I found hilarious. My second book Invasion changed my relationship with the poetry world. It got a rave review by Jeff Nuttall in Eddie Linden’s prestigious Aquarius  poetry journal and after that my poems were accepted by many magazines and anthologies.  That was in 1977.  Jeff then put me in contact with one of our finest and most original poets Bill Griffiths and Bill put me in contact with Bob Cobbing and there we have it –  the three bad boys of British poetry would publish and support me for the rest of their lives.  I didn’t see much of Nuttall although we corresponded quite often in the early days but Cobbing and Griffith would become two of the most important poet friends of my life.

How does your most recent work compare to your previous?
My early work was a kind of raw , disturbed surreal gothic, overturning or undertaking the dark side of the mind, my mind, through a condensed language.  Like many another before and since I had a lot of demons to be rid of in my teens and twenties. I have now got those pests under control or at least I hope so.  Keeping demons at bay is a balancing act on a fragile surface. My main works now tend towards the historical like Mary Queen of Scots (Escafeld Hangings, West House Books) and the Lancashire or Pendle witches (Interregnum, Creation Books).

2 - How did you come to poetry first, as opposed to, say, fiction or non-fiction?
Writing prose has too much dross in the way of ready-made syntax and contrivance of narrative which clogs my psychological arteries.  Poetry is essence.

3 - How long does it take to start any particular writing project?
How long is a piece of string. Everything depends on everything else –  the nature of the project, its size, complexity, involvement, etc.  In the case of longer historical works like Interregnum and Escafeld Hangings we are talking years rather than months.

Do first drafts appear looking close to their final shape, or does your work come out of copious notes?
Yes to both those questions.  Shorter poems can appear fully formed as is by some other agency than yourself.  That can be a bit uncanny and exhilarating but also a wee bit disappointing as if it’s not really yours because it appeared without effort.  Perhaps this says more about work ethic – a no pain no gain culture. You cannot predict whether something is going to slide out virtually fully formed with a smug grin or whether it will groan away for months like a mass of tangled body parts.

Does your writing initially come quickly, or is it a slow process?
I think I’ve answered this in the previous question. It depends.

4 - Where does a poem usually begin for you? Are you an author of short pieces that end up combining into a larger project, or are you working on a "book" from the very beginning?
Yes to both those questions.  Both procedures are possible and not mutually exclusive.

5 - Are public readings part of or counter to your creative process? Are you the sort of writer who enjoys doing readings?
Part of.  Yes I enjoy reading in public. Poetry is happy being loud in a public place. So am I. Not all my poems are suitable for performing – some of them I never read because they are page-bound whereas others just need to strut their stuff.  I do read my poems out loud as part of the process of writing to see how they are positioned in sound because there is an innate intelligence to sound –  it is not decorative – without it language cannot function so it cannot be ignored or relegated to a lesser role.

6 - Do you have any theoretical concerns behind your writing? What kinds of questions are you trying to answer with your work? What do you even think the current questions are?
I’m a poet not a theorist. I leave theory to the theorists.  I’m deeply suspect at the way many of the arts including poetry are expected to be theory driven especially in academic institutions.  It’s a recent fad but I’m afraid it’s one that is with us to stay.  I have quoted elsewhere one of my favourite passages from John Freeman’s book The Less Received (Stride Publications, 2000) and I will quote from it again, ‘...Critical Theory, or simply Theory, now dominates university English departments in Britain, the rest of Europe and America...one effect of the dominance of Theory has been to make its adherents less receptive to the prophecy of poetry. Poets...tend to be regarded by theorists less as seers than as impostors or dupes to be seen through, to be caught out, unconsciously reinforcing a dominant and malign ideology....One professor announced, in a short lecture that he saw it as “his mission” to try the writers of the past and find them guilty’.  Perfectly put I think. I’m not saying there aren’t some interesting theories and theorists but to put the poet and poetry in a subservient position to theory/theorists is a travesty.  Roland Barthes’ The Death of the Author was too good for theorists and academics to resist as it meant they not the poets could take centre stage.  Bah, humbug to that!

7 – What do you see the current role of the writer being in larger culture? Does s/he even have one? What do you think the role of the writer should be?
I’m only concerned with poetry here and I don’t think poets or poetry have any role in the larger culture of The West. Poets are like earthworms. If we stop churning the language over to create poetry then all cultural life will solidify become moribund and die.  So yes, our role is that of the unsung churning earthworm.

8 - Do you find the process of working with an outside editor difficult or essential (or both)?
I don’t work with any editor.  If I need a second opinion or feel I want to sound a poem out I will consult another poet.

9 - What is the best piece of advice you've heard (not necessarily given to you directly)?
Jeff Nuttall circa 1973.  He wrote to me along the lines of introducing the particular, e.g., a discarded meal, the telephone ringing, catching the number 22 bus: from ashtrays to Andromeda – that kind of stuff.  It added a dimension to my poetry that was missing in the very early work.

10 - How easy has it been for you to move between genres (poetry to collaboration with musicians)? What do you see as the appeal?
Easy with music because so much of my poetry has a sonic, modulating, physical quality to it so working with musicians has always been a natural extension of my work.  The appeal is both creative and social.  Writing and performing on your own work can be rather lonely at times.  Collaborating and touring with Martin Archer and Julie Tippetts made me realize how much fun it was to work in a group but also the almost limitless range for interpretation a text has, how much scope for variation of presentation. But like other projects with musicians it was not a permanent grouping (Julie lives at the other end of the country ).  However I am now a member of the antichoir (my coinage) Juxtavoices and it is one of the best creative environments I have experienced.  With Martin Archer and the poet Alan Halsey as co-directors and with Christine Kennedy and myself also poets we provide most of the texts between us, both adaptations and original. The beauty of JXV (as we abbreviate it), is that although we have a few brilliant singers like Lyn Hodnett, Julie Cole and Bo Meson many of us (and I include myself in this) can’t sing for toffee and many of the members aren’t part of the artistic community but just saw us perform and joined us.  The range of backgrounds and vocal competence give it a unique dynamic which makes for a sound like no other!  We do quite a lot of site specific work from old bear pits to disused steel foundries. So watch out for JXV coming to a staircase or warehouse near you.

11 - What kind of writing routine do you tend to keep, or do you even have one? How does a typical day (for you) begin?
I always write late at night or in the wee small hours.

12 - When your writing gets stalled, where do you turn or return for (for lack of a better word) inspiration?
I don’t.  I just let it rest. I enjoy not writing.  It will bubble up eventually. There’s usually something on the back burner – just let it be until it’s good and ready.  I think ‘writer’s block’ is an unhelpful concept and self-fulfilling prophesy.  If you never write again you are not meant to ever write again.

13 - What fragrance reminds you of home?
Rain.

15 - What other writers or writings are important for your work, or simply your life outside of your work?
My life isn’t outside my work.  What’s important depends of what I’m doing at any given moment.

16 - What would you like to do that you haven't yet done?
The splits.  See the aurora borealis.  Speak another language fluently.  Visit all the English counties.  See a ghost.  Down an oyster and like it.  Ride a bike without falling off.

17 - If you could pick any other occupation to attempt, what would it be? Or, alternately, what do you think you would have ended up doing had you not been a writer?
A foreign correspondent or a geologist or historian or biologist or architect or dietician or astronomer or failing that to live in a place dark enough to be a serious stargazer.

18 - What made you write, as opposed to doing something else?
Fate. Fortune. Alliteration.

20 - What are you currently working on?
I’ve just finished curating the final launch of CUSP: Recollections of Poetry in Transition (Shearsman Books, 2011) which I edited and which is a collective autobiography of selected post war British poets.  I’m now working towards ‘Unforgiving Mirrors’ which is part bio part other stuff part poetry part maybe prose – I don’t know to be honest I’m at that lovely stage where I’ve no idea what will become of it.  It changes with the light.