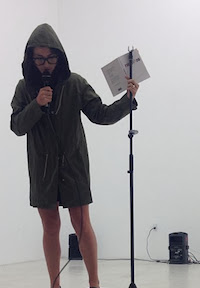 Lucy Ives is the author of two books of poetry, Orange Roses (Ahsahta, 2013) and Anamnesis (Slope, 2009), and a brief novel, Nineties (Tea Party Republicans, 2013). A deputy editor at Triple Canopy, she lives in New York.

1 - How did your first book change your life? How does your most recent work compare to your previous? How does it feel different?
I think the biggest change to my life, as far as writing is concerned, did not come with the publication of my first book but rather with taking formal writing classes and showing my work to readers who didn’t simply say, “This is bad,” or “This is OK,” but instead said other, more confusing things. This showed me that what I had written was legible to someone else, an obvious fact but still kind of a surprise to me! I don’t know if anyone is ever prepared for this experience—of being read and, for better or worse, interpreted—no matter how much he or she has written and/or published.

2 - How did you come to poetry first, as opposed to, say, fiction or non-fiction?
Some of the first things I wrote, as a child, were poems, with rhymes. I would probably write everything in rhyme even now, if I didn’t feel compelled by contemporary prose conventions (and a certain kind of potentially positive shame) not to do so. I don’t know where this inclination comes, or came, from.

4 - Where does a poem usually begin for you? Are you an author of short pieces that end up combining into a larger project, or are you working on a "book" from the very beginning?
At the broadest and vaguest level, I have to say I never know exactly what I am doing, if I am actually writing a poem or not. When something seems impossible to work on anymore then I considered it finished, at least provisionally, and try to figure out what kind of a thing it is. But, having said that, I also feel as if I understand things as parts of larger wholes, even in very early phases, so perhaps I always know quite precisely what I am doing. It’s a tricky and not entirely uninteresting thing, I find, the question of what one knows or can know about the things one makes.

5 - Are public readings part of or counter to your creative process? Are you the sort of writer who enjoys doing readings?
I think poetry readings are very important. Perhaps I mean this in relation to the way that I, and I think others, experience poetry right now: It’s not that the book itself is unimportant (people sometimes jump to say this), but that the reading also provides kinds of information and sensation that one would not want to miss. I find hearing people read their work to be an intense and revealing experience. Perhaps all this goes without saying; I only bring it up because poetry readings occupy an odd space between theater and social gathering—and this is possibly what makes them boring and unpleasant to some, overwhelming to others, and sometimes very good.

6 - Do you have any theoretical concerns behind your writing? What kinds of questions are you trying to answer with your work? What do you even think the current questions are?
I care about time. I wish that I had a talent for physics and/or math, as that might allow me to work with it a little more directly than I can as a writer, but it seems to me that time is a medium in which we write as well as a factor in human affairs whose inexorable movement is more broadly beyond our control, even if we have varied experiences of it and even the sense of controlling it, from time, as it were, to time. I’m fascinated by the way setting a piece of writing aside for a year can, as if this somehow allowed the text to “develop” (as on light-sensitive paper), bring out kinds of meaning that one had not initially been able to perceive—and in the ways in which small amounts of writing, executed over a longer duration, can accumulate into something larger, with a kind of significance and coherence that was not apparent from day to day during the period of composition.

7 – What do you see the current role of the writer being in larger culture? Does s/he even have one? What do you think the role of the writer should be?
Much of the time I am trying to write the sort of thing that I myself want to read. It’s usually something that I believe doesn’t quite exist yet—or does exist, but exists in a form that I would like to see be somewhat different. So I understand the writer as someone who should observe the forms “culture” (something of a generalization, sorry) takes and receive, describe, and, when compelled, revise those forms. But all this is so general! What I mean to say is that a major job of the writer is to have trust in her—and here I’ll refrain from the “his or her” prevarication, since I think that this is also relevant—instincts and inclinations. My own experience of myself as a thinking, communicating being is that I often consciously or personally know less than I can express in writing. So I try to maintain a position, as a writer, of staying out of the way of the writing itself, while it is happening, but then of also working to have the discipline to come back to what I have written, knowing that some of it is going to be more significant or worthwhile than other parts of it. I feel it’s important not to care too much or desire too much personally from one’s own writing, which is very hard to do, seeing as it can be a fairly private process. I think that the role of the writer is to contend with all these tensions—which to me have a larger social and even historical significance and are repeated elsewhere in the ways we live and act.

8 - Do you find the process of working with an outside editor difficult or essential (or both)?
I myself work as an editor so tend to think editors aren’t terrible. However, there is a limited usefulness to editorial intervention. Rewriting someone’s work should not be the goal.

10 - How easy has it been for you to move between genres (poetry to critical prose)? What do you see as the appeal?
I write a good deal of prose now and feel fairly comfortable in it, but this has not always been the case. In my new book, Orange Roses, there is an essay, “On Imitation,” about the problems of learning how to write prose. In America, you sort of learn how to write a paragraph in high school—and then, when you get to college, you’re supposed to be able to write essays with a kind of impossible facility and speed (this, at least, was my experience). So I think it’s worth questioning the ways in which prose is used as a pedagogical tool, and how the presence of prose as a dominant mode of composition affects how we think and write, even when we are not writing in prose. However, I must admit I also feel a lot of affection for sentences.

11 - What kind of writing routine do you tend to keep, or do you even have one? How does a typical day (for you) begin?
If it were a physical and economic possibility for me, I might stay up all night every night and sleep during the day. I think night is a very good time for reading and writing—but then again, I also feel that way about the late morning and later afternoon, so who knows.

12 - When your writing gets stalled, where do you turn or return for (for lack of a better word) inspiration?
To books, especially older and probably obscure ones. I like how singular certain unpopular, formal, instructive, or analytical books can feel. They seem abandoned to me, and I like the weird feeling of being there with them, in that.

20 - What are you currently working on?
I am writing an essay about disappointment and a short novel titled Transformation Day.