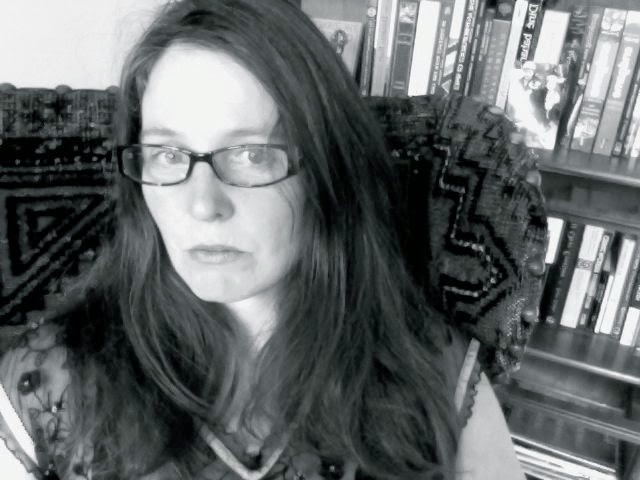 DENNISON SMITH is a poet, playwright, actor and novelist whose work has been performed and published in England, Canada and the U.S. Her recent novel, The Eye of the Day, will be released by Harper Collins Canada in February 2014. Her first novel, Scavenger, was published by Insomniac Press and presented in play form as Desert Story. Smith is the author of two books of poetry: Anon Necessity and Fermata. Originally from Chicago and Vermont, Smith is now a Canadian citizen and splits her time between a small island in British Columbia and Norwich, England.

1 - How did your first book change your life? How does your most recent work compare to your previous? How does it feel different?
At the 2013 Worlds Literary Festival, we briefly discussed the subjects of integrity and courage. It seemed to me that a writer shouldn’t be too quick to ascribe a fixed meaning to either word. Every phase in one’s life demands a different variety of the two. What is courage in one phase might be cowardice in another. In Scavenger, I attempted to literally transcribe the way I thought: writing that’s reckless and scattershot on the surface, elliptically cohesive deeper down. In The Eye of the Day, I’ve reached for greater transparency, with the intention that novelistic convention might discipline my idiosyncrasies. (I don’t use convention in the pejorative sense here. I mean rather the creative tension in which the individual voice encounters the weight of history.) Presently, I’m working on my third novel, Seeds. Both Scavenger and Eye lurk behind this new novel. Here, I hope there is a wedding occurring between world views, form and truth.

2 - How did you come to fiction first, as opposed to, say, poetry or non-fiction?
I didn’t. I began with poetry and playwriting. I still do both, a little. Fermata, a collection of my poetry, came out with Quattro Press in Oct 2012. In 2013, I wrote a five minute play for a UK conference on writing and climate change. Sure, five minutes isn’t much after so many years away from playwriting, but it was enough to give me the itch again.

3 - How long does it take to start any particular writing project? Does your writing initially come quickly, or is it a slow process? Do first drafts appear looking close to their final shape, or does your work come out of copious notes?
No notes. Not anymore. Just write. And rewrite. I can’t really tell the difference between writing and rewriting, because rewriting happens simultaneously to writing, and I would never be able to count the number of drafts. That said, however, Seeds began as a couple of disconnected short stories, which hung around a few years, while I was finishing The Eye of the Day, and is only now emerging into a novel.

4 - Where does a poem or work of prose usually begin for you? Are you an author of short pieces that end up combining into a larger project, or are you working on a "book" from the very beginning?
Oops, I think I just answered that.

5 - Are public readings part of or counter to your creative process? Are you the sort of writer who enjoys doing readings?
I was originally an actress, so I’m very comfortable with readings. Also I’m committed to sound.  There is a strong aural quality to my writing, and I get to explore that viscerally in a reading.

6 - Do you have any theoretical concerns behind your writing? What kinds of questions are you trying to answer with your work? What do you even think the current questions are?
Seeds is written like an archeological dig: vertical time. The nature of time, the simultaneity of history, giving rise to the uncanniness of knowing and apparent coincidence, or the intricacies of cause and effect (I could call it ‘karma’, but I don’t like the moral implications of the word). You’ll find those preoccupations everywhere in my writing. What we know, what we don’t know, about others, about ourselves, and whether we can say for certain what anything is. Moral and social ambiguity. The world glimpsed darkly. The violent moment turning on a dime. Like weather. I write a lot about weather. I could say ‘nature’ but that sounds just a little bit too glib. Seeds is set at the point that global warming has caused major environmental and geopolitical shifts. And in The Eye of the Day, Amos crosses Canada on skis spiking trees as he goes (a form of eco-resistance). I think writing can be a form of eco-resistance.

7 – What do you see the current role of the writer being in larger culture? Does s/he even have one? What do you think the role of the writer should be?
To a certain extent I just answered that, at least as far as it pertains to myself. Beyond my own preoccupations, I won’t presume to speak: there are so many varieties of writers and so many diverse needs.

8 - Do you find the process of working with an outside editor difficult or essential (or both)?
Not difficult. Fabulous. A god send. A privilege.

9 - What is the best piece of advice you've heard (not necessarily given to you directly)?
‘Patience, Grasshopper.’

10 - How easy has it been for you to move between genres (poetry to fiction to plays)? What do you see as the appeal?
Different genres fulfill different needs for me. Short stories only happen in the gaps between novels. Poetry happens in the more general gaps: when there’s suddenly space in my head. Poetry doesn’t have momentum in the way a novel does. It isn’t, for me, what I do every day purposefully and with great diligence. Poetry either appears in the pauses, or I reach to it to write myself back into alignment. But the novel is steadfast. Consuming. Head-eating. Once it has me, there’s little room for a poem to appear.

11 - What kind of writing routine do you tend to keep, or do you even have one? How does a typical day (for you) begin?
I’m flexible. I write in the mornings if I can. If I can’t, I write in the afternoon. I’ll write at night when I don’t find time in the day, but I don’t like to, because it disturbs my sleep. I write between 4 and 8 hours most days. But some days I just go riding or walking or spend the day in an art gallery or hanging with my daughter or a friend. Those days I don’t write at all. I’m fine with the occasional fallow day. There’s work getting done, all the same, behind the conscious scenes.

12 - When your writing gets stalled, where do you turn or return for (for lack of a better word) inspiration?
I go for a walk. Or I read a good book. Teaching too is inspiring: say what you know and suddenly you realize you know it.

14 - David W. McFadden once said that books come from books, but are there any other forms that influence your work, whether nature, music, science or visual art?
Nature, clearly. But I also read the New Scientist every week, and science is having an ever greater impact on my writing. Visual arts have always been important to me. I think of words as paint.

15 - What other writers or writings are important for your work, or simply your life outside of your work?
While, of course, I have my favorites, instead of naming this writer or that writing, I’ll just say this: the community of writers and artists and academics in my life – those who put in the hours and do the work and create the culture of literature – the community itself is of great importance to me.

16 - What would you like to do that you haven't yet done?
Jump horses. I’m riding pretty well now, but I’ve never jumped.  I talk about hang gliding. But I’ll probably just talk about it.

17 - If you could pick any other occupation to attempt, what would it be? Or, alternately, what do you think you would have ended up doing had you not been a writer?
That’s easy. Sometimes I’m a theatre director, sometimes I’m a writer. Recently, I’m almost always a writer, but I suspect they’ll be another bout of directing one of these days.

18 - What made you write, as opposed to doing something else?
Words and their architecture.

Books: My friend Ruth Ozeki’s new novel, A Tale for the Time Being. Wonderful.

And J.G. Farrell’s The Siege of Krishnapur. Masterly.

20 - What are you currently working on?
Seeds. I’ve pitched it to my agent this way: ‘Jesse James meets Grapes of Wrath meets Heart of Darkness.’ Set in three time frames: now (or tomorrow), the Migration Era, and the Reconstitution when the U.S.A has staggered back from environmental collapse. The novel follows a dysfunctional family as two incestuous twins, Tam and Tom, wreck havoc in the new wild west. It simultaneously tells the story of Dorothy, their daughter, now a middle-aged professor in a failing marriage, who retraces her families notorious footsteps back to the Sacrifice Area: what used to be the American southwest.

I’m very lucky to have the University of East Anglia supporting me while I write this novel and – if all goes well – awarding me a PhD when I finish it. I’m hoping to have it finished by 2015.