So. Why has Harriet Martineau become so little known? It’s even more of a mystery when you begin to examine the life and work of Harriet Martineau, by which I mean simply to skim the surface, like I’ve been doing these past few months, lift the corner of the beginnings of what there is to know about this writer and find this versatility: campaigner, autobiographer, biographer, translator, philosopher, novelist, political economist, travel writer, world’s first writer of a how-to book, world’s first female journalist to be retained by a paper as one of its key writers—for she wrote nigh on two thousand anonymous leaders for the London paper the Daily News, particularly making use of contacts she’d made on trips to the United States when it came to covering the American Civil War. (Ali Smith, “The Hour and the Woman”) 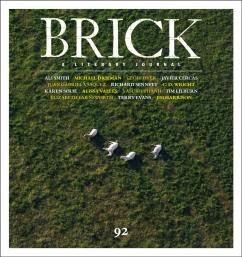 Reading might be a tricky thing these days (given the invention of baby), but I’ve been slowly going through the new issue of Brick: A Literary Journal (#92, winter 2014). The issue opens with a piece by Ali Smith, “The Hour and the Woman,” on the writer Harriet Martineau (1780-1877), and presented as “The inaugural Harriet Martineau lecture, in celebration of Norwich, UNESCO City of Literature.” One of my favourite prose writers for some time, Smith explores the life, influence and legacy of Norwich-born Martineau, writing that “When Virginia Woolf makes a speech about professions for women to the National Society for Women’s Service in January 1931, she lists the names of the women who’ve ‘made the path smooth’ for her, not only smooth but possible at all, as a woman whose profession is literature. ‘For the road was cut many years ago,’ she says, ‘by Fanny Burney, by Aphra Behn, by Harriet Martineau, by Jane Austen, by George Eliot.’” I’ve always been partial, myself, to seeking out the disappeared, given that the reasons for disappearance are always so slight, so random, and forgetfulness is far easier than you might imagine. It would seem a clear oversight that any writer on such a list would have fallen by the wayside to by nearly completely forgotten, especially given the breath, volume and influence of the works published by Martineau throughout her lifetime. Smith continues: “This ‘irrepressibility’ might be one of the reasons she’s not read as much as she might be now. Her writing is, shall we say, fountainous. Another reason might be that the changes of which she’s the vanguard have all happened; we take them for granted.”

Brick: A Literary Journal has long been one of my favourite Canadian literary journals, providing insight into the familiar and the unfamiliar, usually showcasing international writers and works I hadn’t previously had any awareness of, and this issue features an interview by Brick regular Eleanor Wachtel with writer Richard Sennett, an interview by Forrest Gander with Eikoh Hosoe, and essays by Donald Richie, Simon Loftus, Tim Lilburn and Baziju (the collaborative author made up of poets Kim Maltman and Roo Borson). Ottawa writer and translator Mark Fried includes an essay on Severo Sarduy, to accompany a short story by the same writer, translated by Fried. So many of the pieces collected in each issue, whether non-fiction, interviews, fiction, photography, correspondence and even the occasional poem, are wrapped around ideas of small, detailed moments, memory and deep attention. We need to pay attention.

Everything was agitation amidships, hither-thither, hurry-hurry. The crewmen, half-naked, desiccated, and feverish, ran to the bridge and contemplated the city jubilantly; they pointed at the yellowed and twisted features of the palatial buildings as if these were mirages from their deliria during the passage, or as if they recognized them and were confirming the accuracy of the engravings they had been shown in the mother country to beguile them with the pageantry of America. Then they turned the other way, toward the pink towers of the churches and the light green crowns of the royal palms that swayed like cool sprouting grass the length of the port’s boulevard. They ran singing and whistling back to their cabins and tossed bucketfuls of water at one another, swabbing their pale sopping hides now that they no longer had to go even without drinking to make the water last. (“It’s Going to Snow,” Severo Sarduy, trans. Mark Fried)

And of course, I’ve only space to even mention less than half of what lives inside the nearly two hundred pages of issue number ninety-two. One of the really highlights of the issue is a piece by Victoria fiction writer Yasuko Thanh, who writes elegantly and memorably on photography and memory in her piece “Memento Mori,” that includes:

I came across an artist on YouTube, Michael David, who’d built a greenhouse out of glass daguerreotypes because the story, mythologized in a few seconds in a documentary film on the Civil War, haunted him so. Linda Bierds wrote a series of poems about glass-plate greenhouses for her book The Profile Makers. Collage artist Michael Oatman recreated the structure with a group of architectural students.
Ideas make me think of seed pods. They way they burst and scatter and float and settle and sit and warm to the dirt. Take root, grow too stubborn to pull out.
In fact, the story isn’t true. The Library of Congress can account for the majority of the glass plates in the Civil War Collection—even broken plates are painstakingly collected, each sliver in its own pocket. No collection is missing enough plates to have built a field of greenhouses.
But as with most legends, the message about transience is true. It’s what I think about when I think of photographs. We don’t want to be betrayed by time. We want our memories to stick around.

Another highlight is by American poet C.D. Wright, who provides the most thoughtful and exquisite short essay on a poem by Michael Ondaatje, his “Driving with Dominic / in the Southern Province / We See Hints of the Circus” from his collection Handwriting (Toronto ON: McClelland and Stewart, 1998). She ends her piece with:

There are no grand strategies at work in this poem. There is no sabotage to syntax or sequence in which information is delivered. There is no pronounced rhythm. No ulterior philosophical message. With terrific economy a lush environment is suggested. With characteristic restraint a little world is made. One blogger dismissed the poem as something as easy to write as striking a match and blowing it out. It could well have been so simply bestowed, that effortlessly executed. The poem could be the nucleus of one of the central characters and narratives of a novel to come, Divisadero, for instance. I suggest that it is.