Rusty Morrison, Beyond the Chainlink

in your hurry, you will only parse the possible

along your private calendar’s
predetermined lines.

A saucer of milk left on the back porch
only to hasten night.

Every “if only”
is soaked in the same color.

Strategy: Here is this moment,
its fulcrum is changelessness,

even as sky darkens
and the net of time scoops you up, 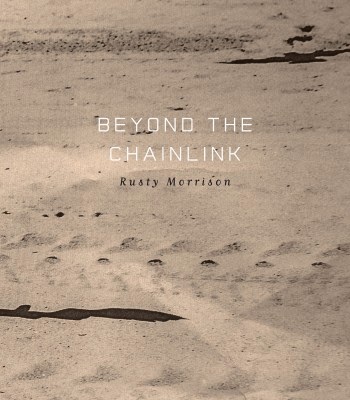 Richmond, California poet Rusty Morrison’s fifth trade poetry collection is Beyond the Chainlink (Boise ID: Ahsahta Press, 2013), a collection that opens with the extended title/sub-title “BEYOND THE CHAINLINK, A CITY / IS THE UNION BETWEEN TWO LOVERS, // NEVER TAKING PLACE[.]” The poems in Beyond the Chainlink display a fantastic collage of meditative connections and self-contained moments, working an incredible tension between connection and disconnect, blended in such a way that the differences disappear. “The body is a sky falling.” she writes, to open the poem “Sensework.” Many of the poems reference the body and a lack of control, as well as a will to re-claim the body. Another poem with the same title, further on in the collection, asks, “How to amass the body’s losses, // link its deities together?” As she writes in her extended bio (included on the publisher’s website), Morrison’s poems attempt to stretch out beyond the scope of her current reach, extending out for the sake of collecting ideas, experience and knowledge, from the loss of her parents, to the fact that she lives “with a chronic illness that has challenged and changed me.” It would seem that the entire collections works through a sequence of changes, both attempting and accepting various changes, and articulating the spaces those changes require. Given that the short lyrics in each of her three sections share numerous titles, this is the author working to return, rework and explore similar territories throughout, composing poems that subsequently move deeper into the subjects of body, possibility and perception. In her author’s statement (also included online), she writes:

In Beyond the Chainlink I want to be honest about my dishonesties—the unreality in my truths and the truth of my unreality. I want to trust the useful disarray of dis-believing what I am sure of—to examine the ways I’m in two places at once. Of course, a preposition like “beyond” is exquisitely skilled at this (bringing attention to both here and not here)—though we hardly notice.

Beyond the Chainlink is a study of small moments, discursive leaps, historical lineages and connections that manage to bridge incredible gaps, such as in the poem “History is hidden in fact,” that opens: “There was milk in our cruelty. / This was wasteful. // This mistake might find a breeze stirring dry leaves / on the sidewalk. // Here is the egg to fertilize, / not dominated by gesture. // This mistake will not be made / the same way twice.” The poems in Beyond the Chainlink play entirely with perception, whether the reader’s, or the author’s own, shifting and questioning, and showing just how wrong it might have been to expect a certain line to automatically follow another. Listen to this couplet from the poem “History of seed,” where she writes “Not the task of illusion. / Just tamp down this soft, fleshy moistened soil.” Or, in one of the poems titled “Backyard rowing,” where she opens: “We were talking about the unfinishable, / not the unfinished.” There are shifting sands, especially once we think, as readers, we’ve finally discovered our feet. As she explains in the poem “History of sleep,” early on in the collection, that includes: “How a second emptiness / un-punctuates the first.”

with objects.
As if to substitute “displace” with display.”

No more flagrant
than flowery words

that blithely neglect their sentence.