Lauren Turner, The Only Card in a Deck of Knives


There are women in life’s prime with soft hair and clear eyes.

While under the canopy of skin, their lungs blossom with minute holes. They
live inside shattering hourglasses. Sand settles their organs as tumours, as
cavities, as increments of dying.

It sounds like a fairy tale meant to scare little girls, but I can’t find the moral.

Tongues struggle to unfurl this illness by name. so, we called it LAM. Sweetened
down to a baby sheep. Something to carry around, tenderly, as it chews us
through.

Bodies, you know, are tedius to deflate. (“Quit Dying to Die”)

Montreal poet (originally from Ottawa) Lauren Turner’s full-length poetry debut, after the publication of her chapbook We’re Not Going To Do Better Next Time (knife|fork|book, 2018) [see my review of such here], is The Only Card in a Deck of Knives (Hamilton ON: Wolsak and Wynn, 2020). Turner deliberately offers this observation at the onset of her notes at the end of the collection: “A book of poetry isn’t a memoir. This collection is an imperfect gathering of personal thoughts. As Bjōrk said, You shouldn’t let poets lie to you.” The benefit of such a distinction is, in part, suggesting hers is a structure of narrative lyrics in assemblage or collage, as opposed to the usually-more stringent overarching narrative requirements of prose memoir. Reminding her reader frees her from certain biographical considerations, as well as allowing her more freedom of movement through and around the subject matter of illness without having to attempt any overt resolution (it makes me wonder if she’s read American writer Sarah Manguso’s incredible memoir on the subject of living with extended illness). Basically: she is writing poems, and doesn’t have to answer your questions. “My disease is female-gendered. The afflicted cohort calls themselves Lammies,” she writes, as part of the prose sequence/section “A Masculine Division”: “sports pink feather pins and bemoans the babies deflating their lungs. I commit / none of these acts, presuming myself above it all being medically barred / from reproduction. I refuse to join the league of dying women who believe grief / is impolite, somehow unfeminine and should be hidden.”

Her lyric narratives are powerful, engaged and self-aware. Imagine a lyrically-dense craft blending elements comparable to those of Lynn Crosbie and Stephanie Bolster writing on love, loss, endurance and terminal illness. As she writes to open the sequence “Blitzed Out,” a poem set in the opening section:

I will never know you and it will always be painful.

Two truths to keep as doves under my silk hat. They coo
Their baleful song, neck in neck as lovers who forgot the proper
Appendage for handholding.

I wanted to be your Vivian, had a faulty childhood
Understanding of that story.

Merlin never slept. Lined his own cave with lamé teacups, a menagerie
Of taxidermied fowl, all stuffed up with burning sage.

He embraced me as the wrong lover. That inarticulate fucking
Of indiscriminate bodies. My deer, he’d murmur to my skin.
Call me adorable.

Say, I’ve forgotten how sweet you are.

The collection is structured into seven sections—“I/ Botched Mythology,” “II/ The Cards Dealt,” “Appendix I/ Quit Dying to Die,” “III/ The Knives Held,” “Appendix II/ A Masculine Division,” “IV? Rigged Games” and “V/ Final Play,” the third, fifth and final sections each composed of but a single poem. “I want to take the violence out of my life and replace it with a swan pond.” she writes, to open the final sequence, the final section. 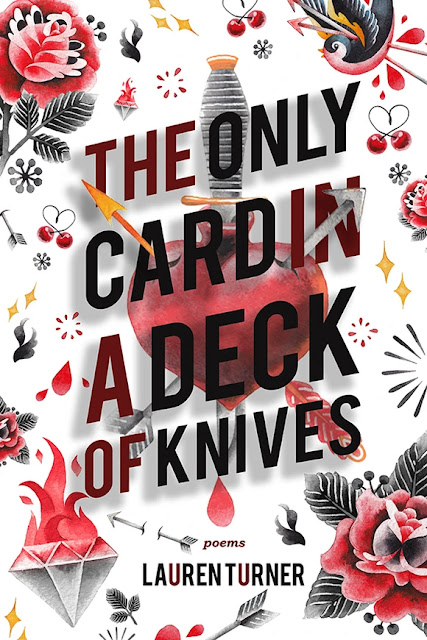 In finely-carved lyrics, Turner writes of illness, love, literary life and the movement of time, from poem titles such as “Copywriting for Pornstars” and “She Found Me Taking Photos of the Snails / and Wondered Why I Was So Into Being Down” to “Quit Dying to Die” and “I Want to Get Married Before I Start Losing Organs.” There is an urgency to her poems that emerge from the awareness of time passing, and time potentially ending sooner than it should; an urgency that often emerges through as an urgency of the immediate present. She writes of her ongoing illness and her lack of patience with nonsense with an incredible, almost wistful, clarity, as well as an ongoing, layered exhaustion, such as the ending of “Cancer Season (reprise),” that reads: “I’m so violently tired. // Anemic with want, siphoned out, / I wade fading into the indigo // tide of this July. You pass me / a cigarette to satiate a compulsion // I don’t even need filled. Listen to that. / I didn’t need. For once, écoute.” She writes of an exhaustion, and a notion of time that is constant: not enough time, wasting time, bereft of time, I don’t have the time, or simply out of time altogether. This is a solid debut; The Only Card in a Deck of Knives writes with a confidence that refuses to be showy, but finely honed, subtle and fully considered.

In Case of Emergency, Please Hang Up

Mangos are the ripest weapons on hand.

You ask me what I’ve wanted the longest
and I say, A mate whose jugular I couldn’t burst.

Going everywhere in a transparent blouse
only to see

where visitors would leave their signature.

The sky is entrailed with fireworks.
a hobo in Hochelaga tells me not to swallow

at picnics no one packed food for.
I do enough damage without refuelling, tx.

Who are pedophiles when the kiddie pools drain
each night?

beguiled and at bay
as Cancer season nicks our ankles to blood.

Posted by rob mclennan at 8:31 AM
Labels: Lauren Turner, Wolsak and Wynn