The earliest pilgrims shared a cathedral for a heart
Jeanette Winterson

To be the camera for your gaze,
I made myself a candle and a view,
a wish and furtive trees just to the right.
The window, dressed in black, was lifted
like a carpet toward the sky, and feathers
blinked and swarmed around a body meant
to signal flight. The house arrayed for
mourning was too full of ghosts and glass
to feel the ancient history of floorboards’
prelude and retreat. Harsh light filled
the closet with misgivings. Absent
of words, pages were relief from hasty,
moonlit vows. The world, once beaded
with desire, was pale milk-white.
Paper moths were thrown into the fray.

The latest title from Maxine Chernoff is the poetry collection Camera (Boulder CO: Subito Press, 2017), a book that opens with the preface/poem, “Preface,” that begins:

The work of this moment: a life is celebrated and others are born and die as I write this sentence. 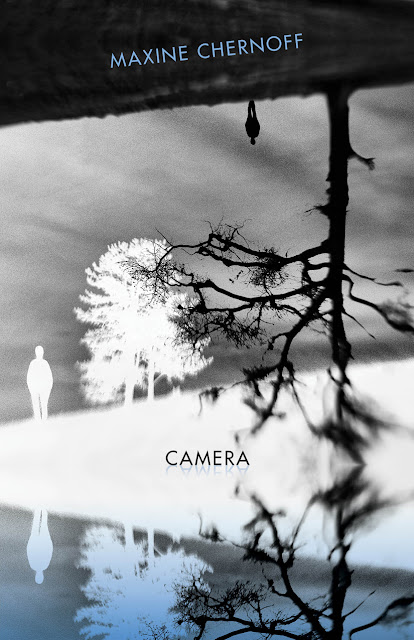 There is a hush and a stillness in the short lyrics that make up Camera, one that holds both breath and the eye. Chernoff writes on the act of watching, seeing and recording, exploring what is possible, impossible and even imaginary, in poems that shift in and out of focus in very precise ways. As her single-page “Preface” closes: “That is the work, giving voice to itself, holding within itself the deep notions of the moment. The poem’s attention is also its ignorance. The work is beyond unkind to everything it omits. The work cannot fulfill its duties of repairing the broken world all around it. The work struggles to contain itself. It does not bleed to death or get crushed by an army. The poem sucks the nectar and returns to its hive.”

You wind up in limbo with liars and thieves who fear you, then sew your own shroud. The exit is a portal: you must grow wings. And like crickets in season and crows at dawn, or the moss at your feet finding the stream, you are small and of things, as if heaven or whatnot were the simple yard of the house in spring. Must you believe? In sewing, in patience, as vines cover the windows and you let them. Come in, you say, to the wind at the gate. You scatter your weakness, splayed on white sheets, no homecomings, hearth, or register. You mend what needs fixing, taking your cue from autumn’s trick of divesting, here and hot here at once.

To watch is to witness, and Chernoff’s poems explore and critique moments large and small, writing clear and condensed lyrics that accumulate to become a book on smallness and attention, as well as one on politics, social engagement and human activity. A hush, and a kick. As she writes in the poem “The Possible”: “So much to tend, oneself included,” shifting immediately to the recent destruction of the ancient Syrian city of Aleppo:

Location as anchor and ivy-filled
absence: the spoken as dirt’s surest witness.

Awake to abstractions, seasons of smoke,
Aleppo’s horizons drop from the sky.