The man was singing to the children
but the children weren’t listening
“Because,” they said, “we are wearing
wet blankets and beyond the ability
to matter.” “What’s that about matter?”
said the man. “About what?” said one
child who was as pink as a balloon.
“I’m worried about the antimatter,” said
the man, “I admit it might be foolish
but the antimatter troubles me deeply.
Similar to a map that is marked up
by a visiting General. He’s drawing arrows
here and drawing arrows there and
lining up battalions and whatnot,
but deep down, in the geography of the
moment, a sense of antimatter is
running down the backs of their throats.”
“Whose throat?” asks a very old song.
“It’s not the throats that concerns me,”
says the General to his saddled horse.
“It’s the antimatter?” says the horse.
“Yes,” the General says, “the antimatter.” 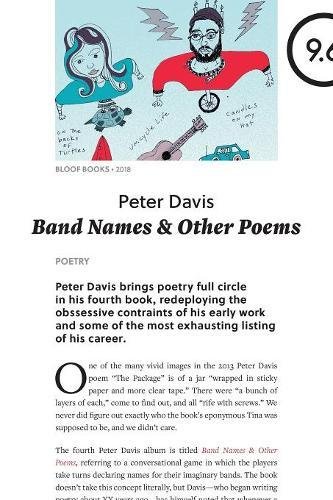 Indiana poet Peter Davis’ fourth full-length poetry title is Band Names & Other Poems (Bloof Books, 2018), a hefty collection at nearly two hundred and forty pages. The pieces that make up Band Names & Other Poems intersperse short lyric narratives with expansive columns of short phrases (for example: “The Cameron Ministry / Speak Hebrew / Bullets That Miss / Soldier Smolder / God Triage / Deathbed Recession / The Bad Guy Patches”), composed and compiled as extended lists of potential “band names.” The sheer amount of names listed is incredibly, and the effect is concurrently expansive, overwhelming and accumulative, and provide both thread and background to the collection as a whole. The more traditionally-constructed poems (the “Other Poems” of the title) are surreal narratives comparable to the work of renowned Canadian surrealist poet Stuart Ross, both poets sharing elements of structure and tone between them. Davis’ pieces might not be as tightly controlled, or even deceptively straightforward, as Ross’, but are more open to chaos and accident; more open to overt absurdity and abstraction. Davis’ poems might open as lyric narratives, short poems with narrative drives and theses, but quickly spiral off, such as the poem “Succeeding in America,” that opens: “It is not as if I can capture the high road simply / by mowing everyone down at the ankles. In fact, / as I try to navigate the crust, I find my desire / to spring forward is held in check my desire / to fall back. It’s like, for each and every Newton / there is an opposite Newton, say, a fig, a Wayne / who is chubby as a tween but a real fucker / on the banjo.”