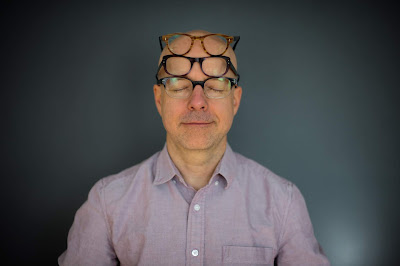 He shares an award for the play PRND21 which won a 2003 Centaur Theatre Award  for Best English Play at the Montreal Fringe. He is a founding member and former Artistic Director of The Bad Dog Theatre Company. His 2016 first book of short humour Vengeful Hank & Other Shortweird Stories was a first-day number one best-seller on Amazon. His latest book, Cliché & Wind Go Hitchhiking, appeared earlier this year.

A BDA Award-winner for his work as an on-air promo writer and producer, he's worked for YTV, The Comedy Network, HGTV, Food Network and many more. A familiar face on numerous commercials, he’s also appeared on Air Farce and The Rick Mercer Report. He created the Unlucky Caveman series of shorts for YTV and was also a recurring character and producer of the Canadian Screen Award (Gemini) winning team that produced CBC Television's ‘The Morgan Waters Show’. (Best Youth Program, 2007).

It was just a great feeling to put out that first book. All told I'd worked on it for probably 4 years. This book feels very much like a solid follow-up to the first, but I think I've become a better writer. For one thing, the stories in my first book Vengeful Hank & Other Shortweird Stories were as short as one paragraph, and the longest being 2 pages, maybe 3. But in Cliche And Wind Go Hitchhiking I made a conscious effort to expand my short stories, such that now the longest story is about 8 or 9 pages. The whimsical, airy but tightness of the writing is still there, but I get to spend more time with the reader in those worlds.

2 - How did you come to writing stand-up first, as opposed to, say, for the page or screen?

I had been writing and scribbling things down since I could hold a pencil. I loved reading, and I loved comedy and cartoons, so my sense of humour has been a prominent part of my persona since I can remember. I've been doing stand-up since the late 80s, when I was in university. I had been writing a humorous opinion column for the student paper, and telling jokes loudly anywhere. Not exactly the class clown, but definitely sitting behind that guy. I could memorize SNL sketches and spend hours with friends listening to and memorizing comedy routines on tv and records. Eventually, a friend dared me to enter a campus comedy contest and I won first place locally, and then first place regionally. When I moved to Toronto, I took an improv class to help me think quicker on my feet, but the result was that I fell in love with improv and stuck with it, leaving stand-up behind for the most part for many years. But through improv I learned to write sketch comedy, and that was a gateway to writing for television. For me, the styles are not so different from each other in that even a quick joke needs structure; a beginning, middle and end. And even when writing something that's only 15 or 30 seconds long, I love wordplay and a good twist. So

I'm very 'feng shui' with my process, in that there is no set process. I just know when it's done. For the most part, though, I just try and blurt it out onto the page. All of it, just a huge word dump. The real writing is in the editing, the paring down and perfecting.

4 - Where does a routine or work of prose usually begin for you? Are you an author of short pieces that end up combining into a larger project, or are you working on a larger project from the very beginning?

To date I've very much been a creator of short pieces of work that are stand-alone, but I am considering revisiting a few of the stories in this latest book and continuing the storylines; I'm in fact noodling on a novel based on the story of cliche and wind. I've also got ideas up in the belfry for a couple novels. All are darkly humorous like the first two books. Not quite dangerous but just a little on the peculiar / weird side. My routine tends to change based on my mood but when I'm working on something, I try and carve out some time every day but it doesn't have to be morning, or night. It can be anytime, even if it's only in 5 or 10 minute intervals. I keep my iPhone and a note pad close to be able to jot things down quickly. I'll even send myself quick email notes if something strikes me and I want to remember it for later. I've also been known to wake up from dreams and trudge out to the desk to write it down right away, or I'll usually forget the inspiration.

5 - Are public performances part of or counter to your creative process? Are you the sort of writer who enjoys performing?

That's a great question; I've asked myself this from time to time. I know writers who just cannot have their train of thought interrupted but I think I work best when I'm exercising different muscles, so doing stand-up and improv in the evenings and writing advertising copy in the day all contribute to keeping my brain and soul engaged and spinning. It's great to have distractions that are fun but also creative and I think they help feed the swamp.

Deep. It's easy to feel that writers and undervalued today since it's so easy to put your work out there and the absolute crescendo of content streaming out of the internet is impossible to follow sometimes... but I think there will always be currency in ideas, and right now the only way other than conversation to share ideas is the written word. I think writers are in no danger of having their place in society lessened.

It's essential - somebody has to read your stuff eventually, so you need someone you trust and respect to do this with you. If ideas are lifting easily off the page and into the mind of the reader, then you have more work to do. You might *think* what you've written is clear, but it's not always so.

If you want to be a writer, just WRITE. It's not a trite piece of advice. Don't care about finding readers, just write. Practice. Embrace and be grateful for failure, too, because that's the only way you'll get better.

10 - How easy has it been for you to move between genres (prose to stand-up)? What do you see as the appeal?

I really don't have one, because I'm juggling a lot of creative outlets (and happy to do that).

If it's early in the morning, I turn to coffee. If it's late in the day, to a walk. To a book. To a movie. To music. Sometimes your writing stalls because you're stalled or empty. That's not a situation that needs to be fixed, just something you can accept and walk away from the desk for a while. That's part of the process.

French fries. (I grew up in potato farm country in New Brunswick. Nothing like the smell coming out of a fry truck)

It's all part of one infinite continuum of stimulus. Nature, music, visual art are all part of it for me, for sure. So is a good meal, fine wine and other intoxicants don't hurt when it comes to just loosening up... and for that matter relaxation and sleep and exercise help, too!

I absolutely loved the work of David Sedaris, Steve Martin and Douglas Adams. I also love work by Monty Python, Kids In The Hall and currently Baroness Von Sketch. Yes, the performances are great in those shows, but the writing is also amazing. I'm also hugely influenced by The Muppet Show writers and Looney Tunes cartoons, especially the work of Michael Maltese. In all these shows, even stuff created largely for kids, there's a level of subtext and duality that I've found is a major theme in my life, a huge nut I've been trying to crack. What's under the surface, there - it's not always anything dark or hidden, it's just secrets that come to light. I laugh at those cartoons today at different things than I did when I was a kid, but I remember what I laughed at as a kid as well. I just love when that happens.

Win a million dollars so I could keep writing but then really not be obsessed with sales of my books. That, or world peace. Oh, and I did tell my wife I was going to make homemade kim chi. I don't like to say things out loud unless I really mean to do them.

I just don't think I was going to be anything except a writer. But there was a version of me in grade nine who was very disappointed when the guidance counselor told me that to be a space shuttle pilot I would probably have to join the military and make much better grades in math.

I've been reading a lot of biographies lately. I just finished one on Bob Dylan, and I have a few more Sedaris books to finish as well as The Marrow Thieves. The films I enjoy aren't high art; last thing I saw in a movie theatre was probably Black Panther. My wife and I are working through this year's Oscar films on demand - Ladybird was great, as was I, Tonya. Is it wrong I'm looking forward to the Star Wars Han Solo film?

20 - What are you currently working on?
The day job keeps me busy writing copy for television show adverts. It's fun, quick and creative. And I'm still doing a lot of improv and stand-up comedy around Toronto. Writing-wise, I'm still deep in work for publicizing Cliche And Wind Go Hitchhking but I'm already starting to feel the call to work on a dark comic thing that I hope turns into a novel. And I've got an idea for a semi-autobiographical thing about the summer I turned 12 and my dad thought it would be a great idea to pack us all up and move us to Ontario to pick tomatoes and cucumbers for the summer. And I'm craving a plate of chip truck french fries, too. I'm sure I can work it all in somehow.