2.
If one has no brother, then one used to have a brother.
There is, you see, no shortage of gain and loss.
Let’s admit without embellishment what we do with each other. When the daughter begins to walk, it is apparent that she ambles pigeon-toed. A doctor tells her alarmed parents that no surgery is needed, just some rollerskating. Each day after work, the father helps his daughter stay upright on her skates.
If you have a father, then you also have a son.
A child has difficulty weaning from nursing bottle to glass of milk. Concise in her expression of impatience, the mother pours a gallon of milk over the girl’s head.
A tiger came across a donkey and having never seen a donkey before, mistook it for a god.
After everyone has gone to bed, an eldest child hoists her younger brother over her shoulders, then a sheet over his shoulders, and they sway as one into the middle sister’s room.
Who is weak and who is weaker and what does relativity have to do with it? (“Ghost Of”)
Winner of the Omnidawn Open Prize, as selected by Terrance Hayes, is Denver poet and multimedia artist Diana Khoi Nguyen’s remarkable debut, Ghost Of (Richmond CA: Omnidawn, 2018), a book that, as the press release states, “elegizes a brother lost via suicide, is a mourning song for the idea of family, a family haunted by ghosts of war, trauma, and history.” The collection moves back and forth between some very sharp lyrics to poems carved out of lyric via erasure, attempting to fill the absences her brother left, as Nguyen discusses as part of a brief interview conducted by Gillian Olivia Blythe Hamel (included with the press release):
In order to talk about the visual-text cutout poems, I need to provide some background context. My brother took his own life in 2014, and two years prior, calmly sliced himself out of the family portraits hanging around the house; I say calmly because he slipped these portraits back into place—in the frames and on the walls—after excising himself. These altered family portraits continue to hang on the same walls today. Every time I visit my parents, I’m visually confronted with my brother’s physical and emotional excision from the family; though I’ll never forget it, I’m forced to confront his actions, our family history, my family’s loss, and my grief.
For a long time I didn’t know how to deal with his death and its aftermath—all that it called forth and removed. The cutout portraits on the wall grew in power and significance each time I beheld them, and at times, I felt crippled by their intensity. On the 2nd anniversary of his death, I sat at my computer, staring at these portraits on my computer screen (I had scanned them for archival purposes), and began to write inside the white space of the portraits, to “fill in” the void that my brother had cut out. What began as a hopeful experiment in self-therapy quickly became a tidal wave that swept me up into the floodwaters of trauma, history (individual, familial, and cultural), and grief, among other things. I found myself reaching out, speaking to my brother (his ghost, his void, the memory of him, etc.) by writing in and around these cutouts, and I couldn’t stop. The deluge was all-consuming. 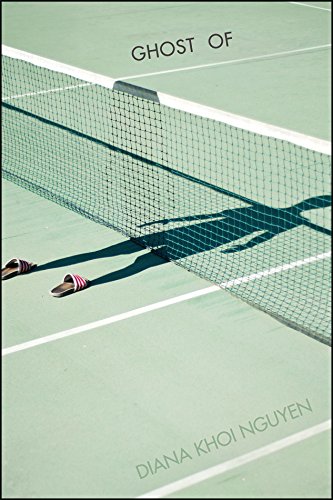 As part of this structure, the collection includes poem/sections titled “Triptych,” that include a photo her brother excised himself from, a lyric composed in the shape of that absence, and a photo-sized prose-lyric, composed to include that original brother-shaped silence. The effect is both powerful and subtle, pushing and exploring the effects that the absence, both as cut out of photos and through his death, couldn’t help but have. As the poem “Family Ties” writes: “The nights before the monks came / to usher my brother out of the realm of the living, / we gathered on the same bed, sifting through photos / and stories of him. / At the funeral, his hand was warm / where my mother would not let go [.]” Nguyen’s Ghost Of is an incredible exploratory series of lyrics, meditations and visuals on family, memory, loss and being, managing to be breathtaking, heartbreaking and even playful, attempting to write both the loss and the absence, physically carved out of an into the page. And the ghosts in this collection are plenty, as are the dislocations: from that of the author’s late brother, to the ghosts that come from her family’s emigration from Saigon to California. As contest judge Hayes writes as part of his introduction to the collection: “Poetry is found in the gaps, silences and ruptures of history. Sometimes it is as if these poems address the reflection of a ghost in the mirror. Other times the poems here look off to a father’s rooftop in Saigon. Or they look deeply into the interiors of family, a brother’s silhouette in the doorway.”