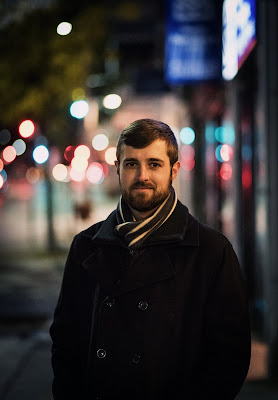 Daniel Perry is the author of the short story collections Nobody Looks That Young Here and Hamburger. His fiction has been short-listed for the Carter V. Cooper Prize, and has appeared in more than 30 publications in Canada, the U.S., the U.K. and the Czech Republic. He lives in Toronto.

In one sense, my newest book Nobody Looks That Young Here is actually my first collection of short stories—it was accepted for publication before Hamburger, even if it’s the second to be published. I mention this because having NLTYH accepted changed one thing for me: my level of confidence in this other collection I had pending at Thistledown Press, which was about half of Hamburger. When Thistledown offered to publish a full-length collection, provided I had more stories, I didn’t hesitate to accept even though I knew it would mean having to rather quickly finish some back-burner drafts, salvage some abandoned ones and even write-brand new stories on a deadline. Without the option of wasting energy wondering if the prospective stories would ever be published (in a book, or at all), I felt freer to just write them.

Though almost none of them were published, nor deserved to be, I wrote poems before I got serious about fiction. I also wrote and edited in the newspaper business for a short time. I came to fiction deliberately when I finally got to it, but I think what actually happened is that I fell into a crevasse between soppy expression and cold journalism.

I don’t make many notes—to me, a fleeting idea feels likely to result in a disposable work—and I take a long time to start. Usually a story I want to write will follow me around for a while and eventually cut off all my escape routes, muscle out any other stories I might want to write and then throw me down front of my computer. My most recently written story didn’t change much from draft to final—I went into a trance one Saturday morning and came to after sundown with 5,000 words I didn’t hate—but that story’s been rejected by 11 magazines now, so I might be doing it wrong.

I realized early on that the first stories I was writing—those in Nobody Looks That Young Here—were linked thematically and geographically and so should probably follow the same characters throughout, too. At the same time, however, I was trying out other, one-off stories I collected in Hamburger, a book that found its thematic label only once the collection was assembled. My next project, a novella, is the first I’ve begun with the declared intent to make a “book”.

I enjoy doing readings, but I think they’d be more entwined with my creative process were I a poet—prose has its rhythms and cadences, but I don’t think it gains as much when read aloud.
For my own readings, I’ll usually choose a flash story or one with a lot of dialogue, as these will usually have more orality and immediacy than longer or denser prose.

Presuming that I ever had any, I think I unlearned my theoretical concerns in the years between obtaining an MA in Comparative Literature and making my first serious attempt at writing fiction. The only question I tend to ask myself when I write now is, “Am I pulling this off?”—do the characters feel real, is the story believable, should anyone care, etc.

I think that depends on the writer, not to mention the culture, but I think a writer’s main responsibility is to do something other than replicate—perhaps to say something “new”, or just as likely something we forgot long ago, but in any case to help us listen for voices that aren’t being heard.

It’s essential. An editor’s job, I read somewhere, is to do everything that’s necessary and nothing that’s not. The editor wants your work to be as good as it can be, and no matter how much editing is done, it’s your work that benefits and your name still goes on the book cover. Leaving aside the possibility that a publisher assigns an editor to a book that the editor truly doesn’t understand—so, author, ask for a different editor—I think an author saying that having an outside editor is in itself difficult says more about the author’s ego than about editors.

“Keep working until you find yourself working”—relayed to me by an actor, but I think it translates to any vocation one seriously wants to adopt.

My favourite time to write is weekend mornings. Monday to Friday, I come home from work having looked at a computer screen most of the day and usually don’t want to spend the evening doing the same (so I look at Netflix or sports on a screen, but anyway…). On a Saturday or Sunday, I can settle in for a few hours (at home, or in a library or coffee shop) and bang out a good number of words. I’m pretty happy if I get to 1,000.

I play guitar, and rather badly, but as a hobbyist (as opposed to a musician) I think I feel freer to try things, play around and fail at that than at writing. I think that when my writing gets moving again, it’s at a moment where I’ve regained this free feeling about my work and can say things to myself like, “Just get through this scene, you can fix it later,” instead of putting pressure on myself to write the scene perfectly the first time—the kind of pressure that, of course, can only lead to walking away again.

I’ve taken a lot from popular music, I think—rock, folk, and somewhat unconsciously, country, too. Lately single lines from acts like The National and Father John Misty have been following me around.

I’m realizing more and more that I most enjoy reading my writer friends’ books. I think that knowing the person doing the writing helps me pay attention to the choices the author’s making in their work. I have a hard time picturing brand-name authors working on a manuscript night after night (though I’m sure they do!), but when I go to a launch I see the book as the product of my friends’ decisions to sacrifice long weekends, earn no money for a few weeks or months, get up at five every morning, leave a spouse and/or child at home for a long time or whatever it is they end up needing to do to finish a book. I also find this energy contagious, and it tends to help me keep up my own work.

The English and French departments at Western granted me my BA, but out of high school I was actually accepted into Economics—I applied there because it sounded like a more lucrative career path than literature (and it still does), but also because I was fascinated with questions of how we organize our world, consciously and unconsciously. I didn’t have the math skills, plus I finally saw the light and allowed myself to study what I wanted to instead of what I “should”, but in recent years I’ve noticed that initial interest coming back. I’ve read a lot of popular money-and-power books lately—Dark Money, Flash Boys, The Hidden Wealth of Nations, Plutocrats, Saving Capitalism—and I’ve also come to almost enjoy working out my taxes every spring. I’d need a team of number-crunchers, but I bet I’d enjoy chasing down stupid-rich tax cheats or something like that.

I think I was always a writer, but I tried to escape it in a few ways (acting and singing in bands) before I ran out of road. I don’t like to think of destiny or higher callings or other self-justifying “explanations”, but eventually I accepted that this was the best way I knew to express myself. Also, I do plenty of something else: I’ve had the same nine-to-five office job for 10 years now.

Colson Whitehead’s The Underground Railroad deserves all the Pulitzers and other prizes it got—it’s timeless and searing and inspiring and many more words that I genuinely mean even if they sound like publicists’ clichés. Movie-wise, I thought Call Me by Your Name was beautiful and moving like Moonlight, Mommy and 120 Battements par minute were.

19 - What are you currently working on?
I’m nearing the end of the novella manuscript I mentioned above, in which a man moves into an old apartment building after a long-term relationship ends and a supernatural woman begins assaulting him in his sleep. I don’t know that it’s properly a horror novel, but I don’t know that it isn’t, either—I’ve restarted it three times since 2014, so for now I’m mostly looking forward to actually finishing this “first” draft and letting it sit before I come back to it and start shaping it into its ultimate form.